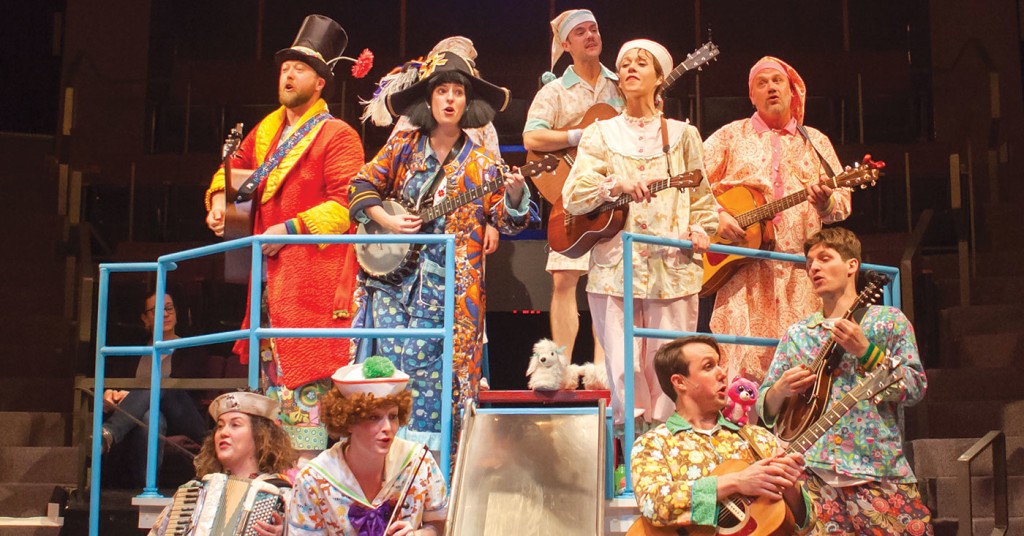 The Cast of 'H.M.S. Pinafore'Photo by Bill Brymer

And it’s a refrain that echoes with giddy pleasure this season at Actors Theatre of Louisville, where Chicago’s marvelous ensemble theater company The Hypocrites is offering their decidedly 21st century adaptation of the text.

I can only add that laughter lifts all hearts — and on the way out of the theater, I couldn’t help thinking the world needs more of these kind of Hypocrites. And I suggest that if you don’t want to be afflicted by the dreaded Canker Worm of Remorse, you should see this show.

As adapted by Sean Graney, Andra Velis Simon and Matt Kahler, and directed by Graney and Thrisa Hodits, this production is a wild, assured piece of interactive theater that invites audience members into the action.

If you want to sail the ocean blue and be attentive to your duty, you’re perfectly welcome to step into the saucy set at any time. Heck, if you want to make a splashy entrance, you can even make your entrance via sliding board. If you join the fun, you’ll be in the middle of a gorgeously colorful set (Tom Burch and Michael Smallwood) and surrounded by sound and lights from Rick Sims and Heather Gilbert, respectively.

You needn’t wear pajamas — but if you do wear pajamas, you’ll fit right in with the cast and concept. This Pinafore is set up as a zany pajama party, which unleashes costume designer Alison Siple to create some of the sweetest little riffs on sailors’ hats and boat shoes you’ll ever see. But regardless of whether you’re wearing pajamas, you’ll certainly get involved in a pillow fight at some point (in fact, best to arrive at the theater early, and get into the spirit of the party by tossing soft stuff back and forth (the properties designer is Maria DeFabo).

And in this Pinafore, all the gender roles are flipped, so it’s women who wield (or, to their chagrin, are bound by) power and authority. If you know the original text, you may delight in knowing that the Right Honorable Sir Joseph Porter, first Lord of the Admiralty — he who started his career as an office boy whose job was to polish up the handle of the big front door and handled that task so carefully that now he is the ruler of the Queen’s Navy — is now become Dame Jo-Anne Porter (Lauren Vogel, who struts the part and sports a grand cocked hat with a purple cockade).

If you don’t know the original text — no matter. Pinafore DNA coils through hundreds of contemporary romantic comedies, and you won’t need a crib sheet to keep up with the twists and turns.

Just know that the Admiral has his heart set on the son of Captain Cat (Emily Casey) — and Captain Cat is bent on elevating her family’s status through a favorable match. Meanwhile, Captain Cat’s son Joseph (Doug Pawlik) is smitten with a humble tar named Ralphina (Dana Omar). Rest assured their romance will blossom in song — and the goodhearted members of the crew — except for Dot Dead Eye (Kate Carson-Groner — support this unlikely match.

But wait —  there’s more! Poor little Buttercup (Rob McLean), who sells snuff, tobacco and pretty much anything else to the sailors, is secretly mooning for Captain Cat.

All these tangles of romance and rank call out for commentary from others aboard the Pinafore, and Danny Goodman, Patrick Martin, Erik Schroeder (as Cousin Heebies) and Erin O’Shea as the cheery Sailress Billi are up the task.

All this requires plenty of music, as well, and everyone on board this Pinafore sings, dances and plays one or more instruments — the stage is covered with ukes, guitars, accordions, fiddles, clarinets and more, including — in one telling scene — a flute (Andra Velis Simon is the music director).

It’s a tough job keeping everything straight aboard this Pinafore — what with pillows and strangers moving from yardarm to poop deck (oh, yes, there are jokes about poop decks), and credit for that goes to Production Stage Manager who rocks a clipboard so hard that things never go wrong.

Christmas shows are upon us.  This week sees the premier of Juergen K. Tossman’s “The New Mrs. Claus” at the Bunbury Theatre. The premise sounds like a group therapy session on the North Pole, with Santa Claus, Kris Kringle, a not-so-jolly Old St. Nicholas and Babbo Natale hashing things out. Dec. 4-20, 604 S. Third St., bunburytheatre.org, 585-5306.

For youngsters, consider “A Year with Frog and Toad,” from StageOne Family Theater at the Kentucky Center, 584-7777, www.kentuckycenter.org, or “Jack Frost Saves Christmas” at Derby Dinner Playhouse, which also offers a stage adaptation of “White Christmas,” (812) 288-8281, www.derbydinner.com.

If you haven’t already ordered tickets for “The Kings of Christmas” at the Bard’s Town Theatre, it’s time. This is one fine comedy that’s almost certainly going to sell out most performances. Between this and Pinafore, you’ll likely be laughing well into January. It runs Dec. 10-20, 749-5275, www.thebardstowntheatre.org.

There is also, of course, Actors Theatre of Louisville’s always golden, glowing and heart-stirring production of “A Christmas Carol,” which runs through Dec. 23.

And an urgent reminder: Teatro Tercera Llamada’s premier production of “Pa’ Gringolandia,” by Francisco Juarez continues this weekend at Vault 1031. This richly textured, naturalistic play explores the issues around immigration from perspectives that will likely reshape yours when you see it. In Spanish with projected English supertitles. I recommend it highly. The venue is at 1031 S. Sixth St. For reservations and information, 386-4866, teatrotercerallamada.com.