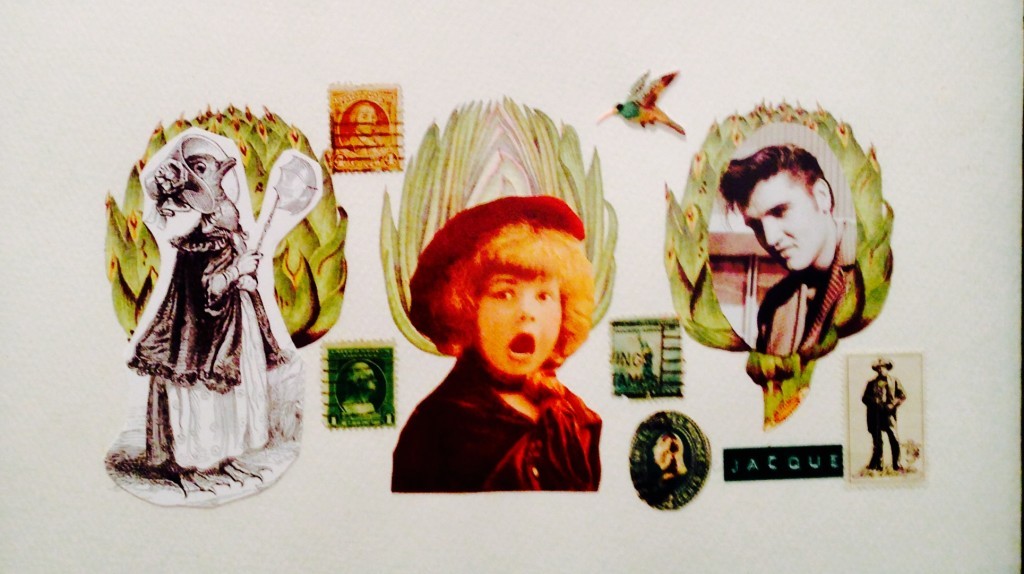 [The above image is “Elvis Has Left The Building” by Jacque Parsley.]

Jacque Parsley ([email protected]) might know what happened to the head of your old baby doll. If it’s lucky, it ended up as a part of one of her sculptures. A collection of cast-off objects becomes, in the hands of an artist like Parsley, a visual message that transcends the sum of the parts.

LEO: When did you start making art?

Jacque Parsley: I have always been interested in making things. Even as a little girl I began weaving potholders, crocheting and embroidering pillowcases and working on other forms of needle arts. I recently began collecting poems written by artists accompanied by their artwork for the Brooklyn Art Library “Sketchbook Project.” My contribution was “When Jacque Parsley was a babe in arms, she was already collecting little charms. Shadow boxes filled with dolls, covered all her bedroom walls.”

LEO: Explain how you make a collage for those who have not seen your work?

JP: I start out with a theme like flowers, dogs, birds, food or people like Frida Kahlo. Having decided on a theme, I collect all the images, stamps photos, toys, objects or information about the subject and sometimes go on a treasure hunt at flea markets and antique stores. If I am making a 3D assemblage I use both flat and sculptural objects, such as old drawers, washboards, trays and wooden hat forms for the basic structure. Then I start to glue, paste or nail the assembled items together. I begin with one main object or an image as a focal point. I keep everything the same scale and balance the piece with color, texture and repetition.

LEO: What is the most unusual object you have ever used in a collage?

LEO: What is something people don’t know about you?

JP: I love comedy and a good joke. I can remember jokes from thirty years ago. I also love folk art.

LEO: What changes would you like to see in the art world in Louisville?

JP: I would like to see more murals, like the ones of Wil Sieg who did the murals of Slugger Field and Joe Ley, and Gibbs Rounsavall, who did a mural in Shelby Park. In a little town in Mexico — Pachuca — in the impoverished neighborhood of Palmitas, the Mexican government hired artists to paint a huge mural in bright colors that covered over 200 houses. As a result of that mural, crime was reduced by 30 percent and youth violence was virtually eradicated and the project created several jobs.

LEO: Of all the art that you have created, what is the one you are most proud of?

JP: I am most proud of some of the pieces I have in an exhibit at Galerie Hertz at this time, especially the one entitled “Why can’t we all get along?” I made this piece about a month before the Paris tragedy.