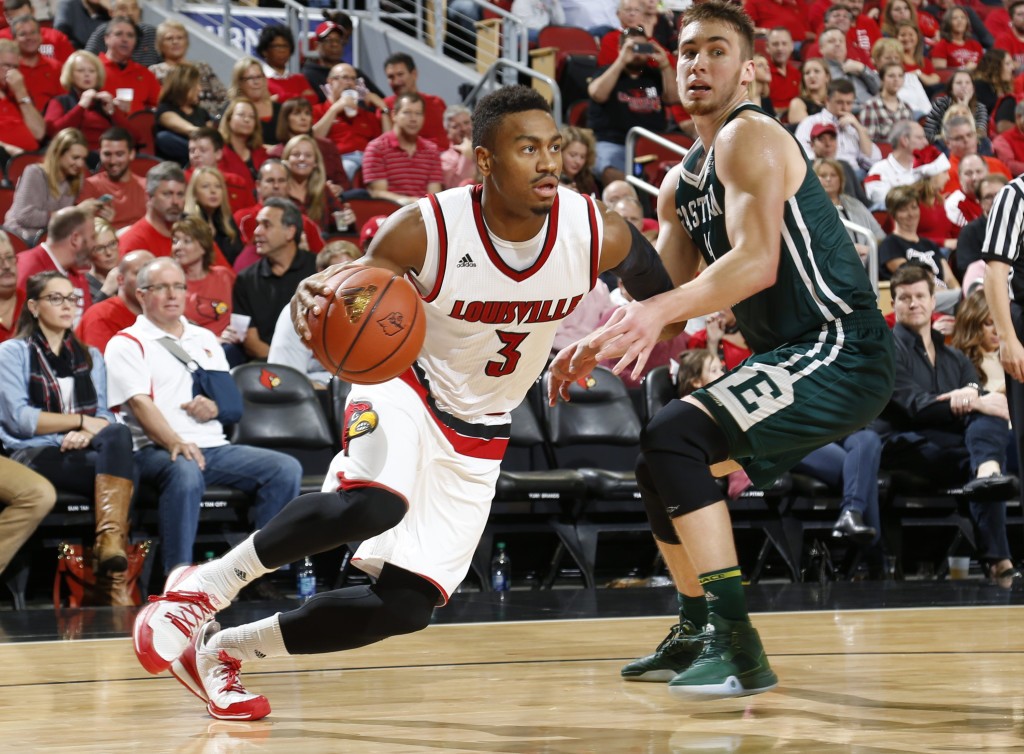 Ashley: I’m going to take a line from Aaron Yarmuth to start this week’s roundup and say, “Man this is a really good basketball team!” I must say that the Louisville Cardinals are one of the most exciting teams in the country to watch this season. From the skill and finesse of Damion Lee to the acrobatic dunks of Donovan Mitchell and beyond, they surely keep the games interesting, even when they are up 30. I started last week’s roundup noting that this team was good enough to play with any team in the country, and I’m still sticking with that assertion.  Randomly, while riding in Uber this week, I heard a radio personality comment that, while it is normal for top teams to play weak non-conference schedules, it is not uncommon to see them play to the level of their competition and drop a game they should have won by 20 plus points, but Louisville, he continued to say, has taken care of each of its weaker opponents convincingly.  And…let’s not forget that they led the top team in the country for most of the game.

This week, the speed at which this team plays really stood out to me. This is a very fast-paced team which can be great for wearing teams down. Louisville moves the ball quickly, slashes and cuts on offense and they pressure teams into rushed or poor shots on the defensive end.  While this style is extremely fun to watch, I’ve noticed that several times, Louisville can play too fast which leads to careless turnovers. I strongly believe that where they are as a team at this point in the season is very encouraging, but they still have some room to improve.

First, I must again ask this question: The Louisville Men’s Basketball Team is a solid shooting team; they can make 3’s, floaters, and short corner jumpers…why can’t they shoot free throws?! I hate to harp on this, but as the days on the calendar continue to roll over, and as Louisville plays closer games against more competitive opponents, those freebies become more and more important. They will win or lose them close games.

Secondly, since my duPont Manual High School basketball days, I’ve always been told that “offense sells tickets, defense wins games, and rebounds win championships.” Herein lies the problem…Louisville does not consistently block out. Often times, the post players rely on their athleticism to secure rebounds (which is pretty typical at this level of play and beyond), but not implementing this valuable fundamental could hurt the team when they face the taller and more athletic teams coming down the pike in the ACC.

Lastly, I’ve noticed that Coach Pitino has changed the starting lineup around a few times this season, seemingly on the search for a solid big man to play alongside Nanu. Who will it be? I would like to see more aggression out of the boys above 6’3.” It would drastically change the team and their overall trajectory to have one or two of the big guys scoring consistently with their backs to the basket and then tearing the rim off like Mitchell loves to. Louisville needs Mangok, Johnson, Mahmoud (once out of the boot), or Spalding to become a consistent presence on both offense AND defense. And they need it NOW!

In all, this team is ahead of where I thought they would be at this point in the season, and it should be a very exciting week leading up to the game scheduled on the 26th. This is preparation week, and the CARDS will pass the test. My predictions for this week include a 20 point victory over Louisville native Aaron Crosby and Western Kentucky University to break the series record (39-39) in Louisville’s favor, and 30+ victories over UMKC and Utah Valley before the team hits the road to Lexington. This will be the first time this season that Louisville will play 4 games in 7 days, and it will be excellent preparation for the upcoming conference schedule. Get ready for an exciting 7 days!

Aaron: If you will allow, I would like to take a quick moment to say how grateful and happy I am that we are doing a weekly UofL roundup this year. A well-documented record of my prognostication that UofL is one of the best teams in the country, well before the bandwagon. In truth, it isn’t hard to see how good this team really is. I just feel bad that there will be so little variety in the roundups … there are only so many ways in which you can cover greatness.

This is also an important week in the roundup, because it marks the last installment where I am free to talk as much smack as I want, before having to tone it down and keep any bad vibes (or “juju” as Robert DeNiro would call it) off the Cards. In short summation, after two dominant wins over decidedly weaker opponents, it is amazing to me how different players step up and impress each game. Take Wednesday’s game against Kennesaw State. While they were largely in mop-up time, Matz Stockman went for 8 points and 5 rebounds in 11 minutes. The fact that a talented 7-foot center like Stockman struggles to get game time is just a testament to how formidable this team really is. On that note, do-it-all freshman Ray Spalding filled the stat sheet against Eastern Michigan, going for 11 points, 7 rebounds, 3 blocks, 2 steals and 2 assists … in 18 minutes. So, as the Cards host Western Kentucky tomorrow, check out the variety of ways this Louisville team has of scoring; inside and out, in the half court or transition, this team can rotate in shifts and not miss a beat. Perhaps that’s why they’re shooting over 50 percent from the floor for the season (52.5 percent). Between that and the Hilltopper — the greatest mascot in the world — it’s a game worth watching. Go Cards!