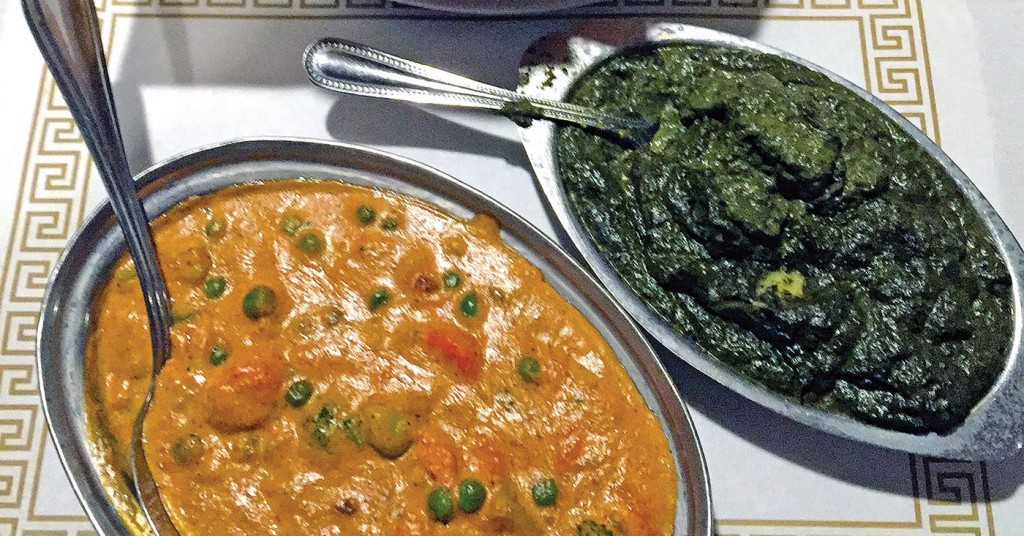 If we lived in India, there’s no way we could have been unaware that last week was Diwali, the Festival of Lights, when Indians — and Hindus around the world — celebrate the triumph of good over evil with a holiday filled with lights, color, fireworks, music and dance and plenty of good things to eat.

Diwali is like Christmas, New Year’s, Thanksgiving and the Fourth of July all rolled into one, or in other words, about as big as Derby. Diwali doesn’t have much of a profile here in the U.S., though. Well, the Hindu Temple of Kentucky off Westport Road did have a celebration last week. We couldn’t find Diwali at any of the local restaurants, though, but that didn’t keep us from enjoying a delicious Indian meal at Taj Palace.

Taj Palace offers an affordable and carefully curated lunch buffet. But it’s the full menu that displays the appetizing diversity of Indian cuisine. If you think you don’t like Indian food because “it’s all spicy hot and it all tastes the same,” you just haven’t been paying attention.

Think about this: India’s cultural diversity of Hindus, Buddhists, Muslims, Sikhs, Jains and more all but mandates culinary diversity. Muslims don’t eat pork. Hindus shun beef, and many of them avoid meat altogether. Jains are strict vegetarians, and some Buddhists are too. In short, like the famous Facebook status, “It’s complicated.”

But the result of that complication is that there’s a lot more choice in Indian food than you might think. Vegetarians can rejoice at Taj Palace, where one full side of the menu is meat-free. Even vegans, often limited to salads or staying home, can indulge in most meatless dishes in a cuisine that’s light on dairy save for the occasional use of yogurt or simple paneer cheese.

Meat-eaters are all set, too, with the option of chicken ($13), fish ($14), lamb ($14), shrimp ($14) or even goat ($14) on an easy mix-and-match entree menu that offers a choice of any of those proteins with any of a dozen Indian-style sauces, from creamy tikka masala to spicy rogan josh, fiery vindaloo, buttery makhani and more. A half-dozen tandoori dishes, marinated, spiced and roasted in the clay tandoor oven, are $12 to $22; and rice-based biryani dishes are $12 to $14. Fully two dozen vegetarian entrees are attractively priced at $10 to $12.

More than a dozen appetizers, soups and salads, plus a half-dozen Indian desserts, round out the menu.  There’s rice, of course. No Indian meal is complete without steaming mounds of aromatic, fresh basmati rice.

And bread! Did I mention bread? What? You didn’t think Indians ate bread? Hang on, bubbeleh. That’s like saying you didn’t know that Italians eat rice. Oh, wait. But seriously now, folks:  Some of the world’s most ancient breads remain alive and well today in the range of tasty flatbreads that feed the hungry spirit along the old Silk Road. From Greece and the Balkans with their pitas to Turkish flatbreads, Iranian lavash, the fire-baked breads of the steppes of Central Asia, and on through Pakistan to India, we find all manner of naan.  Not to mention crispy lentil pappadams, puffy whole-wheat puris, rotis and parathas and more.

Taj Palace does well by its breads, offering a full dozen — many of them flavored naan (yeast-raised flatbread speed-baked in the searing-hot tandoor), easy to sample at $2.50 to $4.50 per generous portion. I couldn’t resist the $9 “bread basket,” a combo basket of plain naan, garlic naan and aloo paratha, a thin, fiery hot potato bread. Expect the breads to come out dripping with a little ghee (clarified butter). Expect them to be tender, flavorful, and a great vehicle for sopping up delicious Indian dishes.

I used them to sop up a dish of veggie korma ($12), peas and carrots and onions in a thick, “creamy” non-dairy sauce made from cashews, and a half-order of aloo saag ($6), a dark puree of long-simmered spinach and creamy, tender potato dice.  You’re invited to order mild, medium, hot or extra-hot, and “hot” worked well for me, spicy enough to get my endorphins working without causing actual burns.

Lamb Seekh kabab ($14) was our only disappointment, and this may have to do with erroneous expectations. We expected chunks of tandoori-seared lamb, but the dish turned out to be a tandoor-roasted ground-meat concoction molded onto a skewer in sausage-shape tubes. Sadly, we just couldn’t get any lamb flavor. It was palatable, but we had to file it under “mystery meat.” (It was also beautifully plated, an upscale touch that Taj Palace adds to many of its dishes.)