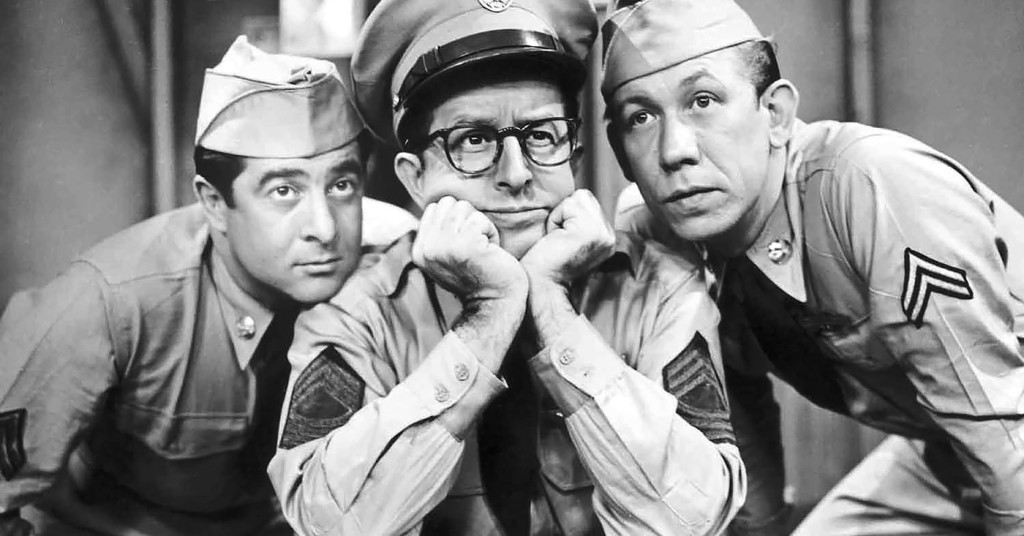 MCHALE’S NAVY: THE COMPLETE SERIES
1962; $124.98-169.98; UR
Our buddy Ernest Borgnine will live forever as Navy Lt. Cmdr. Quinton McHale, carrying on the proud tradition of “Sgt. Bilko,” giving neither aid nor comfort to “the enemy” — his commanding officer! He leads a roguish crew of mad men, just happy to be enjoying the good life in the South Pacific, running a little booze and making life miserable for his CO, Joe “Ozzie & Harriet” Flynn. With Tim Conway as Ensign Parker, and a host of Borscht Belt baggy-pancers as his men — particularly Carl “The Great” Ballantine and Billy Sands — this four-season wonder remains one of the best things ever put on the tube, 21 discs of glorious B&W TV.

SGT. BILKO/THE PHIL SILVERS SHOW: THE FINAL SEASON
1959; $29.98; UR
In many ways the classic TV era ended in 1959 when “Sgt. Bilko” left the air after four glorious, frantic scheme-filled seasons. Phil Silvers, of course, was the con-man leader of a dedicated squad of goombas, saps, and partners-in-crime, always ready to take on whatever get-rich-quick scheme he dreamed up, but the highlight of this season was the first episode, in which he secretly arranges for his girlfriend (the colonel’s secretary) to be transferred away! And she finds out it about it! And decides a little payback is in order! Absolutely the funniest half-hour the tube ever saw. Also available in a complete series set for $130 or less.

ART OF THE HEIST
2015; $59.98; UR
Can a documentary be exciting? If you answered “no” then you’ve never seen this look at the world’s greatest art thefts, including the hijacking of the Mona Lisa from The Louvre, walking it straight out the front door as guards cleared a path! In cases where the art was recovered, we hear from the actual thieves, most of whom have never spent a day in jail. In open cases, such as the infamous unsolved mass theft from Boston’s Isabella Stewart Gardner Museum, the crimes are reenacted, showing how incredibly simple larceny can be. Great fun.

LIVING IN OBLIVION
1995; $28.98; R
Can it really be 20 years since this white-hot barb skewered the movie-making industry and made stars of Peter Dinklage, Steve Buscemi, Catherine Keener and Dermot Mulroney? Where does the time go? It’s a simple visit to the set of a no-budget indie film where everything that can go wrong does go wrong, just like real life. Dinklage steals the movie by simply being a person — not a stereotype — with all the attendant warts and foibles. Contains some of the most memorable lines in moviedom, such as when one character’s mother wanders onto the live set and says, “I’m sorry, Nick. If I knew there was going to be a wedding I would have worn my fucking hat!” Now available in a special edition Blu-Ray with all the trimmings.

THE MAN FROM U.N.C.L.E.
2015; $18.98-44.98; PG-13
Henry “Man-O-Steel” Cavill is Napoleon Solo to Armie Hammer’s llya Kuryakin in director Guy Richie’s flawed stab at bringing a great old TV show to the big screen … as a comedy. Does it work? Well, sorta. Hiring Alicia Vikander of “Ex Machina” as the requisite nuclear-scientist’s daughter worked for us, but the story is all over the place, and the famously dry Ritchie sense of humor could use a spot o’ tea. It’s a visual masterpiece, of course, and all the improbable mannerisms and conversations are there, though they often get in the way of the fun action pieces. In other words: It’s a Guy Ritchie film! Who are to argue with success?

THE REBEL: SEASON TWO
1960; $32.98-34.98; UR
While this post-Civil War series lasted only two seasons, it remains one of the best remembered from TV’s Golden Age, largely because of its charismatic star, Nick Adams (who did a couple of great, cheezy monster-flicks in the ‘60s). The final season starts with one of its best episodes as Yuma tries to prevent a young boy from assassinating General Grant by telling of his own life-changing opportunity to kill Grant at Appomattox, and how his decision forged our nation together. Includes the brilliant Johnny Cash theme song, missing from earlier video releases.

WHITE OF THE EYE
1987; $21.98; R
Made in the heyday of the slasher flick, this fevered bloodbath set itself apart by having an exceptional cast lead by David Keith and Cathy Moriarty, plus a truly twisted villain invoking a grotesque Native American ritual, and an exceptional soundtrack that included Hot Chocolate’s “You Sexy Thang,” work by Nick Mason of Pink Floyd and Rick Fenn of 10cc, a little Hank William’s Jr., and Booker T. Jones’ excellent “Slim Jenkin’s Joint.” Eschewing the usual “teens walk in the woods” plot, this follows a married couple in a ritzy desert community; he is suspected of murder, setting her on a collision course with … We won’t spoil it. Vastly underrated.

*** More Recommended Videos for our On-Line Readers, Only!
BAD BOYS/BAD BOYS II
1995; $23.98-26.98; R
A damned-fine first-ever 4K Blu-Ray pairing of these Martin Lawrence/Will Smith action/crime comedies, which broke box-office records and cemented director Michael Bay’s rep as the go-to guy for action films. Smith, just one year after “Independence Day”, is at the top of his game, gleefully blunting Lawrence’s non-stop stream of vile ad-libs. Fans consider BB2 to be the better of the two, if only because it featured Gabrielle Union as the requisite woman, plus Peter Stormare, Joe Pantoliano, and Henry Rollins. A must-own.

CHRISTMAS MIX
2014; $13.98-19.98; UR
Originally broadcast as “Naughty and Nice”, we find Tilky Jones of boy-band “Take 5” as an over-the-top big-city radio DJ sent to quiet Nowheresville Colorado, where he is paired with up-tight talk-show shrink Haylie “Napoleon Dynamite” Duff as punishment for an air-gag gone wrong. By now you’ve probably guessed this is a made-for-family-cable romcom. So why bother? Because it co-stars Maureen McCormick – “Marsha” from The Brady Bunch! And she’s really good! Did we just write that? Man, we gotta stop all that classic-TV binge watching …

DICK VAN DYKE SHOW: COMPLETE REMASTERED SERIES
1961; $99.98-199.98; UR
We have a long-standing rule to NEVER promote any video product that we’ve never seen. Or to put it another way: if the studio doesn’t care enough about you, dear reader/consumer, to extend us the professional courtesy of a copy of the product to review … to hell with ‘em! But we’re going to bend this one time because we are slobbering fans of The Dick Van Dyke Show. While long available on both DVD and Blu-Ray, the picture and sound quality of past sets were poor at best – we suspect that they were simple transfers from scratchy, years-old, VHS tapes – but this new DVD-only release has supposedly been remastered from the original 35mm broadcast negatives. That suggests not only greatly improved quality – particularly on the musical numbers – but should have allowed them to recover more of the original broadcast commercials and promos (always a hoot), Reportedly contains tons of great bonus goodies.

EMPIRE
2015; $49.98; UR
No, not that violent, overhyped, Rap-infested nighttime soap, this is a 5-part look at a real empire, the British Empire: how it came to be and the devastating effect it has had on our planet. We follow the English-speaking world’s greatest leaders and adventurers (including some of the most ruthless and arrogant men in history) as they establish Imperialism in India, create bloody power struggles in Scotland, enforce White dominion over Africa, invent the Hong Kong drug trade, and worst of all … found the Jamaican Boy Scouts! Through all this brutality the British “right to incorporate” our world is considered sacrosanct. It makes you wonder how history will remember U.S. interventions in the Middle East. History has never been better.

MERRY EX-MAS
$13.98-19.98; UR
One of those lame, seasonal ION-TV family-friendly rom-com-dramas that surface this time of year, only to be quickly forgotten. So why waste time talking about it? Because the cast is more interesting than most, with Kristy Swanson (the original movie Buffy The Vampire Slayer), Dean Cain (TV’s pussy-wooped Superman), Lochlyn “True Justice” Munro, smokin’ Jodi Lyn O’Keefe, currently of “The Vampire Diaries”, and Ernie “Ghostbusters” Hudson as a Pastor.

WILD CITY
2015; $14.98; UR
The box art seems crafted to hide the fact that this is a down-and-dirty Hong Kong actioner, though we can’t imagine why. In truth it’s the conclusion to Ringo Lam’s action-trilogy which began with 1987 “City on Fire” with Chow Yun-Fat. Here Louis Koo is a fatalist bar-keep/former-cop who has given up on our evil, money-obsessed world. Against his better judgement he helps drunk waif Tong Liya, only to find himself in the crosshairs of the woman’s insane, rich boyfriend and his mob-army of crooks and assassins. Oh! And the Triad is also out to kill him. A nice return to form after Lam’s long hiatus.