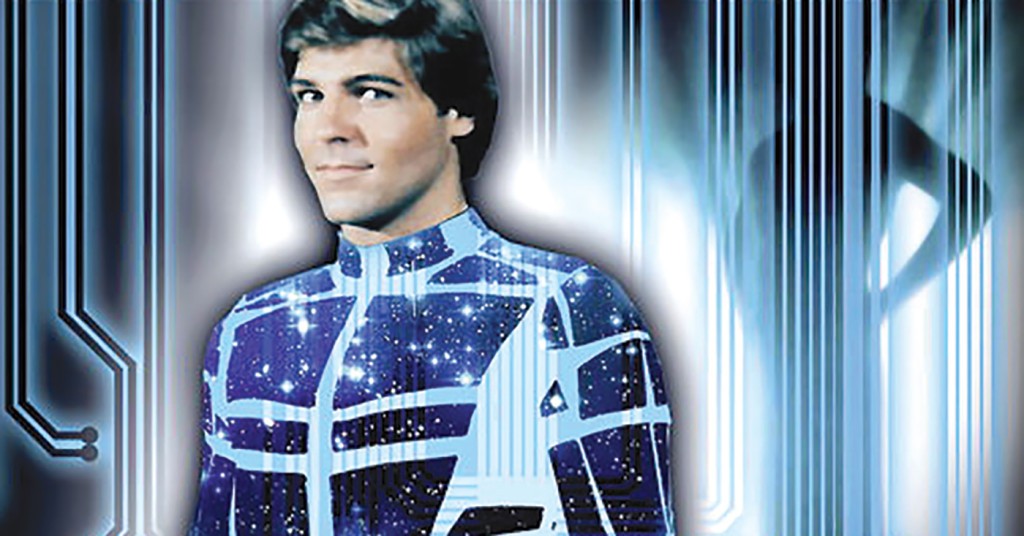 AUTOMAN: THE COMPLETE SERIES
1983; $19.98; UR
We may be the only people alive today who fondly remember this corny TV “Tron”-inspired piece of crap starring Desi Arnaz Jr. as a cop/computer-geek who creates an AI hologram so awesome that it starts walking around — and driving a Lamborghini Countach! — to fight crime. As asinine as it sounds (and Desi’s lack of acting talent didn’t help much) this turkey became something of a cult hit among 6-12 year olds, who watched it largely to torture their parents back when homes had only one TV. With a magic floating android named Cursor, and veteran TV actor Robert Lansing as their boss, this one-season experiment in bad TV makes the perfect gift. Enjoy.

MANIMAL: THE COMPLETE SERIES
1983; $19.98; UR
Another long-forgotten one-season wonder from Glen Larson studios, this one starring cheezy Brit Simon “A Poor Man’s Michael York” MacCorkindale as a mysterious and wealthy college prof who can transform into any animal he chooses to fight crime and injustice. He’s assisted by his old Army buddy, Michael D. Roberts (recently of “Arli$$” and “Parks And Rec”), one of the few positive Vietnam-vet characters seen on the tube during that decade (or since, for that matter). The best thing about this nonsense was blonde and beautiful Melody Anderson — Dale Arden from 1980’s “Flash Gordon” — as the obligatory cop-friend, ahead of its time.

FOYLE’S WAR: THE COMPLETE SAGA
2002; $119.98-199.98; UR
Our vote for the best video release of 2015 is this absolutely perfect detective drama set in WW2 and starring Michael Kitchen (“My Week with Marilyn”) as a grave detective chief disgusted by the rampant depravity of opportunistic criminals and desperate innocents alike. This is war-fueled crime with a capital “C,” which he must wade through with help from his confidant/driver Sam (the wonderfully monikered Honeysuckle Weeks) and a reluctant protégé’ (Anthony Howell), literally holding the empire together as humanity swirls the drain. In later seasons Foyle retires from the force to become an MI5 agent, which only ratchets the tension and suspense to ever more unbearable levels. Twenty nine perfect discs, almost four solid days of entertainment, including six plus hours of bonus goodies! A must-own.

GOSEI SENTAI DAIRANGER: THE COMPLETE SERIES
1993; $40.98; UR
As anyone who lived through that era knows, the original season of “The Mighty Morphin Power Rangers” was spliced together from scenes of the long-running Japanese series “Kyoryu Sentai Zyuranger.” But season two’s Thunderzord battles and much of the hand-to-hand combat came from this series, which has much the same look and feel of KSZ, but a completely different backstory. Lasting only one season — an amazing 50 episodes! — Gosei’s grand 5,000-year conflict between the previously peaceful Dai, Shura and Gorma tribes set the stage for most of MMPR’s future look and feel. Ten discs of costumed fun.

RESTLESS
2012; $22.98-34.98; UR
Hayley Atwell starred in this fine BBC TV-movie spy tale less than a year after creating the role of Agent Carter in “Captain America: The First Avenger.” Gorgeous Michelle “Downton Abbey” Dockery visits her mum (Atwell), never suspecting that the good lady had been a Russian-born spy for the Brits in 1939. Seducing a series of dangerous men for information, she was eventual betrayed and targeted for assassination — and now her daughter is in deadly peril, too! Simply wonderful at every turn, with Rufus “Abraham Lincoln: Vampire Hunter” Sewell, Michael Gambon (“Harry Potter”s later Dumbledore), and Charlotte “Dexter” Rampling.

TANGERINE
2015; $22.98-29.98; R
The most amazing movie about Hollywood’s slimy underbelly we ever saw. First-time actress Kitana Kiki Rodriguez is Sin-Dee, a streetwalker just released from a month in lockup and looking for her sleazy, unfaithful pimp/boyfriend on Christmas Eve. For help she calls Alexandra (transgender actress Mya Taylor), and together they go on an a harsh, vulgar, razor-honed odyssey through America’s worst dregs. We guarantee that this movie will shock and offend you, regardless of your tastes, but that’s just the veneer; underneath is raw, masterful storytelling. We can’t wait to see what writer/director Sean Baker of “Greg The Bunny” and “Warren The Ape” does next!

WKRP IN CINCINNATI: THE FINAL SEASON
1981; $19.98; UR
While “WKRP” lasted only four seasons, it remains one of our all-time favorites, making stars of Howard “Doctor Johnny Fever” Hessman, Tim “Venus Flytrap” Reid, and of course Loni “Thank You Jesus!” Anderson. Season Four begins with a two-part bomb-threat, followed by some of the best episodes of the entire series, including Venus’ origin story, and the one where slimy salesman Herb inadvertently sets innocent Les up with a hooker. Uncredited co-stars include the Ohio River, the occasional disparaging Kentucky joke, and the best end-credits song ever recorded — the words are complete rock ‘n’ roll gibberish! AM radio rules! Or at least it did once.

BEST OF ENEMIES
2015; $22.98-29.98; R
While it’s hard to imagine in today’s Fox News/Social Media age, at one time there were gifted intellectuals driving US public discourse with civility and passion, men and women who truly understood their social obligations and had something important to say – and they said it politely. But that world ended in 1968 when ABC-TV televised a series of debates between Gore Vidal and William F. Buckley. With one a staunch liberal and the other conservative, these normally refined interchanges devolved into the most outrageous spectacle of high-brow cat-calling and rude, personal attacks America had ever seen. And we loved every minute of it, attracting the greatest viewership numbers in history. TV studios took note and started making the evening news “edgier”, and so ended America’s history of public civility. Amid moon landings, racial unrest, and anti-war protests, you can now see it all just as it happened in this excellent doc. Highly recommended.

INSIDE OUT
2015; $19.98-39.98; PG
Disney’s second home-run animated feature of recent years isn’t the visual storybook treat of “Frozen”, but cranks up the action by visiting the brain of a young girl (voice of Kaitlyn Dias), populated by comic personifications of her various emotions, including Anger (Lewis Black), Fear (Bill Hader), Sadness (Phyllis Smith), and especially Joy (Amy Poehler, having a ball). And when her Dad moves the family to a new city, she’s going to need all the help they can provide if she’s to keep it together. Simply put: One of the best movies we ever saw. Just buy it..

MARRY ME FOR CHRISTMAS
2013; $14.98; UR
Made-for-TV Afrocentric tale of a busy single woman (Dawn Halfkenny) who pretends to be engaged to one of her employees to satisy well-meaning friends and family at Christmas.

NATHAN FOR YOU: SEASONS 1 & 2
2013; $22.98-24.98; UR
What? You never saw the funniest show on Comedy Central? Multi-talented nut-ball and all-around con-man Nathan Fielder is the world’s most original small-business consultant, helping real, honest-to-God businesses grow – or maybe not – using the tricks he learned in business school … and anything else he can dream up. Like poop-flavored yogurt. Or having a realtor certify his homes as “Ghost Free.” Or having a clothing store assist shoplifters! Two discs of truly brilliant reality and addictive comedy.

OPERATOR
2015; $19.98-24.98; UR
Your basic cameo-action flick, this one starring Mischa Barton (whom we’ve always had a crush on) as a 911 operator who must join forces with her estranged cop-husband (Luke Goss) when their daughter is kidnapped. A low-rent ripoff of “Phone Booth”, to be sure, but buoyed by bits from Ving Rhames and Michael Paré,

PAY THE GHOST
2015; $29.98; UR
Oh, hell no! Another damned Nicolas Cage movie?! Gawd, how we hate this guy! Here No Talent Nicky goes searching for the young son who disappeared from a Halloween parade a year earlier. Sarah Wayne Callies from “The Walking Dead” plays his wife, and together they emote all over the place while supernatural voices and noisy spookidoin’s drive them insane between the cheap “jump out and go BOO!” moments. Of course there’s some sort of legend, urban or otherwise, at the heart of it all, but the real mystery is “why do they keep hiring this guy?” Okay … it is kinda fun.

REBUS: THE KEN STOTT COLLECTION
2001; $59.98; UR
Limey scribe Ian Rankin has been winning literary awards since the first volume of his “Rebus” crime novels, which made their TV debut in 2000 with John “Spartacus: War of the Damned” Hanna as the titular sleuth. But Hanna privately disliked the role, and it fell to Ken Stott, who you’ll recognize as the dwarf Balin in the “Lord Of The Rings” movies, to provide the dark grit that Hanna lacked – and fans cheered the change. Rebus is the perfect Scotsman: annoying, sardonic, with no regard for standard procedure or legal mumbo-jumbo, and prone to fits of loud, brilliant near-madness as he corrals thieves and murderers with the help of his protege (Clair Price, “The Second Best Exotic Marigold Hotel”). Ten perfect 1-hour episodes; a real hoot.

TERMINATOR GENISYS
2014; $26.98; PG-13
Yet another reboot of sorts for the venerable robot-killer-from-the-future franchise, greatly improved by the presence of aging cyborg Arnold Schwarzenegger, who has a knock-down, drag-out battle with … himself! Jason Clarke plays John Connor, with Emilia Clarke as Sarah Conor, Jai Courtney as Kyle Reese, and Everyman actor J.K. Simmons in a toss-away role. The real star, though, is the Mobian fractured-time storyline that lets fans revisit many of the iconic scenes and lines from the originals – and hopefully wash away memories of Terminators “3” and “Salvation.” Man, do we love fighting-robot time-travel movies!

TRAINWRECK
2015; $24.98; UR
Fans of Amy Schumer should drop whatever they’re doing and run to the nearest vidstore, because the lady has found her element. Uninhibited monogamy-phobe Amy is living the high life as she sees it: free from romantic entanglements, she beds and bye-byes whomever she pleases; until she writes an article about hunky, unattached sports-doc Bill Hader, who literally charms the pants off everyone he meets. That gets her thinking about that most horrible of human situations: “settling.” It’s from Judd Apatow, so there’s no surprise it’s filled with drugs, rudeness, naked male bottoms – with a “stunt penis”/washcloth shot of John Cena! – and all the other things that make movies so much fun.

A more complete listing and free vids at VideoTapeworm.com