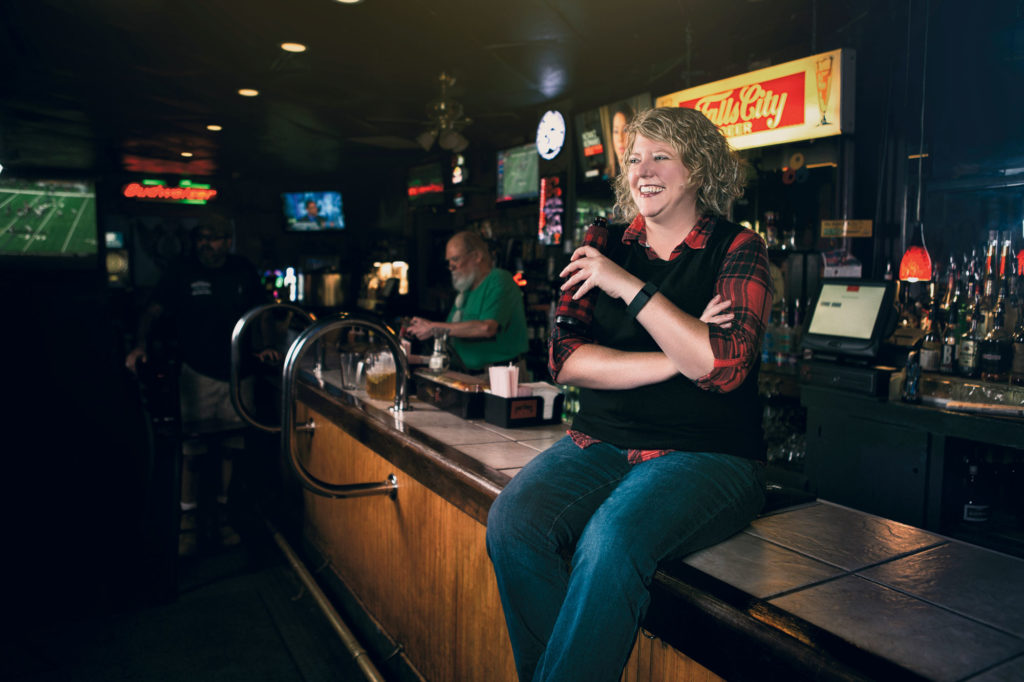 You’ve probably seen her at The Back Door. Dressed casually in jeans and plaid, sipping an Old Forester Signature neat. The Bar Belle is a presence that over the last nine years has become the voice of the Louisville nightlife. Sara Havens, the woman behind this incorrigible persona, began writing her “Bar Belle” column for LEO Weekly in 2006 and is the first to tell you it was a longtime coming.

“I was pretty straight­laced growing up and through high school,” Havens recounts. “But once I got to college, I discovered beer and no curfews.” Havens attended Ohio State University – which was recently ranked the No. 1 party school in the country by Playboy – before moving to Louisville in 1999.

“When I moved here, I didn’t really know anybody, so I made friends by going out with people on the bar scene,” she describes. Armed with a degree in magazine journalism, Havens got a job at LEO Weekly, and, on Thursdays, the company had a tradition of going out to The Back Door for happy hour. This soon became Havens’ entrée into Louisville nightlife.

“I would come in every Monday and have all these crazy stories of what was happening on the weekend,” she recalls. “Finally they were like, ‘Why don’t you write a column about your crazy weekends?’” So, in 2006, “The Bar Belle” was born. Infused with wit, charm and a dash of snark, Havens’ columns were published every other week and became a hit with the community.

She soon started receiving invitations to bourbon events and beer events. Bar owners would reach out and ask her to write a column at their place. She even started getting recognized while out, “which I thought was weird,” she laughs. Then, inspired by a colleague who self-published a collection of his columns, Havens released nearly all her material to ­date in 2011 as “The Bar Belle,” a book that included a foreword by Congressman John Yarmuth.

“I would come in every Monday and have all these crazy stories of what was going on that weekend. Finally they were like, ‘Why don’t you write a column about your crazy weekends?’”

“Right away, Carmichael’s agreed to carry it, and I did a reading and signing there,” she recounts. “I held my launch party at The Back Door, and I remember being overwhelmed with how many people were there.” The column maintained popularity, but, despite her public success, Havens was let go by the LEO in August 2014.

She proceeded to take a month off to figure everything out and, with the help of friend April Corbin, set up the Bar Belle Blog. As LEO had allowed Havens to retain her Bar Belle name and all previous material, she was able to move all former columns onto her own blog. 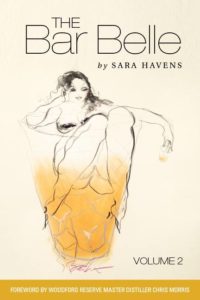 Then, in September 2014, Havens took a job at Insider Louisville and, ever since, has published her column on that site whenever the inspiration so moves her. She’s 38 going on 22, which always presents the opportunity for interesting angles. “I kind of give people a glimpse into the nightlife scene,” she explains of her column. “A lot of people my age are married with children or have sort of let go of this scene, but I’m still here, reporting!”

And during that reporting, she’s able to become almost a different person. “I feel like the Bar Belle is a character because I’m kind of shy and soft­spoken, but when I’m writing my column, this other person comes out,” Havens relates. However character­ driven the bulk of it may be, “The Bar Belle” does in a way chronicle Havens’ own development, particularly as a lesbian – an identity she didn’t assert until she was 30.

“In that first book, I might mention something like ‘I don’t sleep with frat boys,’ but I was just saying it as a joke,” she explains. “And I didn’t really write a coming out column, but I did start mentioning it here and there.”
Although it was indeed a revelation that came later than many would expect, her sexuality wasn’t a truth that had been burdening her for the first quarter of her life. “I didn’t not come out because it was a secret I was hiding. I just had no idea,” she describes. “I knew I wasn’t into men, but I didn’t know there was another option, really. I didn’t know any lesbians, and, it’s kind of funny, I was watching ‘The L Word’ and was like ‘Oh…’”

Her sexuality now indeed plays into her column but is hardly the focus; she’s more interested in capturing the personality of the nightlife than pontificating on her own. And people are still loving the Bar Belle. So much so that in early September of this year, she released “The Bar Belle Volume 2,” now available at Carmichael’s, local Liquor Barns, Regalo, Craft Gallery, Amazon.com and on her blog, barbelleblog.com.

Always out and about on the town, Havens can usually be found at The Back Door or Big Bar, either working on a bourbon neat or, if she’s going for quantity over quality, a Miller Lite or Michelob Ultra with a sidecar of bourbon. Chances are she’s not­ so­ secretly absorbing observations that will find their way into her blog and maybe even her next book. Because as long as there’s bourbon to be poured, the Bar Belle has stories to write.

“There’s so much new stuff happening with the nightlife and bourbon, so there’s always going to be stuff to write about,” she says with a wink. “As long as people don’t think I’m too old.”