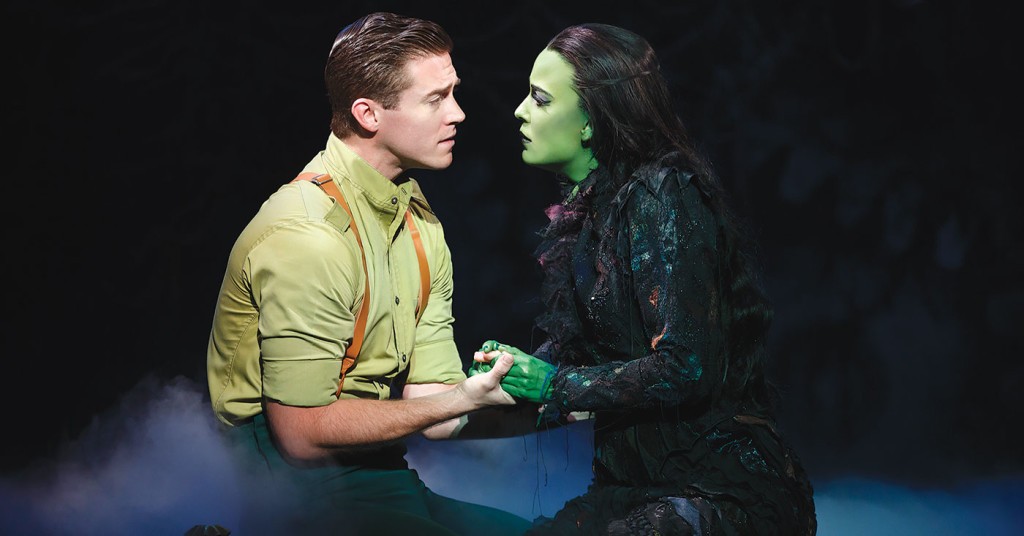 Midway through the first act of “Wicked,” the 2003 musical by Stephen Schwartz and Winnie Holzman, Elphaba (aka the Wicked Witch of the West) has a meeting with the great and powerful wizard who runs the Emerald City.

She quickly discovers that not only is the wizard a humbug, he’s also been knowingly and falsely demonizing an entire class of Oz’s citizenry for political reasons.

Elphaba (Alyssa Fox), herself a frequent victim of prejudice (Kermit was right — it isn’t easy being green), is astonished. But the Wizard (Stuart Zagnit) is ready with a quick justification. It’s all about making Oz a better place: After all, the Wizard argues, nothing brings people together like giving them a common enemy.

At a time when humbugs and conmen abound on the American political scene, “Wicked” feels like a Howard Zinn-inflected “People’s History of Oz.” And that impulse, coupled with all the trappings of a big budget Broadway musical, puts “Wicked” right in the middle of a great tradition in American musical theater. From “South Pacific” and “Fiddler on the Roof” to “Rent” and “Urinetown,” musicals have used sweet melodies and romantic stories to peel away the corruptions and hypocrisy of power. Of course, both L. Frank Baum’s original novel, “The Wonderful Wizard of Oz,” and the classic 1939 film adaptation make no bones about the Wizard’s humbuggery — or the tightly locked gates that confront the refugee Dorothy and her tattered, squeaky, frightened companions when they show up seeking help at the ostensibly great, glittering Emerald City.

But this deliciously subversive play (which has been running continuously on Broadway since 2003 and has given rise to multiple touring productions and a slew of productions all around the globe) offers an entirely different creation myth for the city of Oz. It’s “Hunger Games” with a  broomstick. And in the PNC Broadway In Louisville production that opened last week at the Kentucky Center, audiences get all the splash and color a big budget stage experience can provide — if you’re looking for a reason to get out of the multiplex and away from your enormous HDTV, the production elements alone should lure you to Whitney Hall. Sets, sounds, lights, costumes — all are deployed with cunning power.

And from our vantage in the orchestra seats (if you find yourself in the far reaches of this 2,377-seat hall you might want to bring binoculars), the dramatic elements are superb as well. Director Joe Mantello has his cast reveling in this alternative account of the origins of Oz and characters like the Scarecrow, Tin Man and Cowardly Lion, who — after the action in this play — will join forces with Dorothy.

And Mantello’s cast includes a set of fine voices (especially Fox, in a fine transformative performance as the emerald-skinned revolutionary;  Carrie St. Louis as the bubble-borne, bubble-headed Glinda the Good; Fiyero, as the handsome prince whose passion for partying gives way to new motivations; Liana Hunt as Elphaba’s wheelchair-using sister Nessarose, and Lee Slobotkin, whose voice and portrayal of Boq — enthralled by Elphaba, ensnared by Nessarose — is outstanding. Excellent character actors bring this production to life, especially Chad Jennings in a poignant role as Doctor Dillamond, whose plight triggers Elphaba’s moral dilemma; Wendy Worthington as school mistress turned press secretary for the corrupt Wizard; and, of course, the Wizard himself (Zagnit). And the choreography — especially the remarkable work of Chistery (Ben Susak) and his troop of flying monkeys — is excellent.  So, by the way, is the accompanying orchestra, conducted by P. Jason Yarcho.

Of course, the Wizard was quite right that nothing brings people together like giving them a common enemy — that’s Demagoguery 101.

The problem these days is that it’s hard to keep up with the demagogues. Who are we afraid of this week, the Mexicans or the Muslims? Can we fear on two fronts simultaneously? Or better yet, can we suddenly imagine Muslim-Mexicans massing on the shores of the Rio Grande? Or wait — didn’t someone already mention that possibility?

Anyway, instead of just mocking Donald Trump (who would look pretty good in a Wizard outfit), I urge you to see “Pa’ Gringolandia.” It’s a new play by Francisco Juarez.  Now based in Louisville, Juarez hails from Mexico, where his multi-faceted career included serving as a professor of physics and mathematics at the Technologica University of Southern State Mexico, as well as extensive experience in theater and radio production.

“Pa’ Gringolandia” is presented in Spanish with English language supertitles by Teatro Tercera Llamada, one of two excellent Spanish-language theater companies that have developed in Louisville over the last few years.  It is a fine, short piece (running time about 1 hour) that is both enlightening and moving — and what more could you want from a piece of theater?

The play is set in Mexico, where Meche (Catalina Ibarra Hernandez) and Chamoy (Julio Samayoa) live happily and respectably — but barely within their means. Chamoy is a blue-collar guy who owns his own shop. Meche makes and sells hand-sewn napkins to supplement their meager income.

Chamoy’s sister Grace (Paola Murguia) and her husband Armando (Marcos Rodriguez) left Mexico for the U.S. some years ago and have returned for a visit.

These four characters embody a set of conflicting attitudes about Gringolandia — the U.S. Chamoy fantasizes about the “Hollywood” lifestyle reflected in the photos that come from the U.S. As a mechanic he marvels at the idea of living in a place where nobody fixes anything — they just throw things away and replace them. Armando is euphoric about returning to his roots and renewing connections with the land, village and people he still loves. Grace is still bitter about the circumstances that forced her north but loves raising her children in a place where “the janitors live better than” Chamoy and Meche. And there is Meche, who has a fierce pride in and love for the place where she grew up.

When Grace and Armando offer to bring Chamoy and Meche to the U.S., the playwright delves into rich emotional territory that gringos seldom contemplate. And the performances are riveting: Rodriguez is magnificently jubilant as he celebrates his homeland; Murguia cultivates a wonderfully studied indifference; Samayoa’s Chamoy is feisty and charismatic. And as the play nears its close, Hernandez delivers a beautiful speech that might even give a demagogue something to think about. •