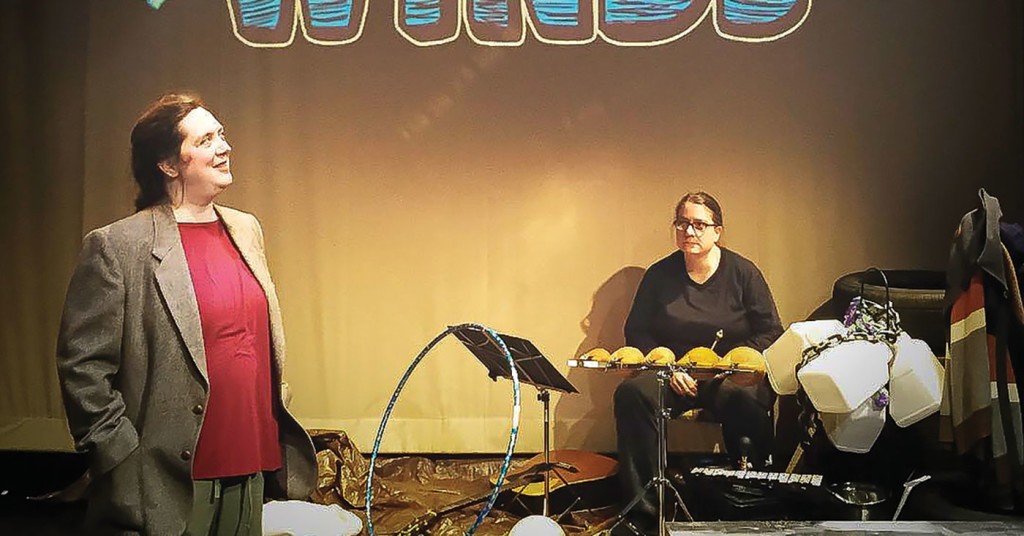 If you live and breathe anywhere in the Louisville region, you need to see “Prevailing Winds,” the newest production from Looking For Lilith Theatre Company.

Two years in the making, and two hours in the running, “Prevailing Winds”  is a splendid piece of documentary theater that gathers up the complex threads of Louisville’s vexed environmental history and weaves an epic, comprehensive narrative that is as deeply moving as it is richly informative.

And let’s be clear from the outset. This play — which focuses attention on the West End Rubbertown area, while reminding us that our prevailing westerly winds respect no neighborhood boundaries — is not a one-sided polemic. Yes, it documents the decades of environmental degradation in the West End’s “chemical corridor,” but it’s so scrupulously balanced that it will likely infuriate many activists and observers who’ve grown weary of the infantilizing rhetoric employed by local business leaders, politicians and media outlets who persistently minimize the risks borne by those who live in close proximity to towering mountains of coal ash, whose children haplessly bike and play on the toxic soil of EPA Superfund sites, whose friends, co-workers and family members die of cancers, neurological syndromes and respiratory conditions attributable to chemicals produced in the neighborhoods where they live.

No, “Prevailing Winds” is not a screed. Rather, it expends quite a bit of wit and energy in a convincing account of the positive economic and social benefits we all derive from the products produced by firms that do (or have done) business in Louisville’s West End, and time after time it emphasizes the nuanced complexities that vex policy makers. On that side of things, the production does a magisterial job of tracing the 20th century trends that brought us to where we are. And that is a fascinating story, one seldom told and little understood.

But there are other stories here that are seldom told and when they are, usually in isolated fragments. Here, those stories have been gathered via interviews and oral histories, deep research into the documentary record and a review of an enormous collection of images. In this regard, the creators of “Prevailing Winds” have done us all a service that deserves a large measure of civic gratitude.

What these folks have assembled is a carefully honed account of quietly heroic parents, educators, reluctant neighborhood activists, engineers, scientists, businesspeople and politicians who have fought for decades to have their concerns heard and respected. These are tales of activism, organization and advocacy, of frustration and persistence, humiliation and pride, decades of failure, and then of inspiring, ground-breaking successes.

By design, the figures in these stories go unnamed in the production (though many are recognizable community leaders). But these unnamed folks are the ones who attend dozens of community meetings, who organize, who spend their free time researching the health effects of chemicals, who advocate for their neighborhoods, who listen politely (mostly) to the patronizing airs of “experts” and who try not to roll their eyes when corporate spokespersons who live and breathe many miles away deny that breathing coal dust is a risk to health. And though the subject isn’t covered in this production, these are the people being told yet again that if only they understood the science and the economic benefits, they’d rally around yet another chemical plant in their neighborhood.

Again, if you live and breathe in Louisville, this is the most important play you’ll see this year. It should be mandatory viewing for anyone in a leadership, advocacy, educational or policy-making position in the region, and I certainly hope that somewhere, someone finds the funding to create a film or video version to widen the distribution.  •

Meanwhile, in a lighter vein, at The Bard’s Town Theatre, a small veteran cast (Ryan Watson, April Singer and Doug Schutte, who also directs) is giving a clinic in comedy with a fast-paced, witty, time-shifting comedy by Madeleine George, “The “Curious Case of the Watson Intelligence.” It’s a bundle of wit that blends the twists and turns of a romantic comedy with  nice bit of political satire, some Sherlockian parody (complete with deerstalker), a wonderful take on contemporary artificial intelligence (with references to IBM’s Watson supercomputer) and, to round out the Watsonian references, a touching reinterpretation of one of the great episodes in the history of technology — Alexander Graham Bell’s first phone call to his assistant, Thomas Augustus Watson.   •