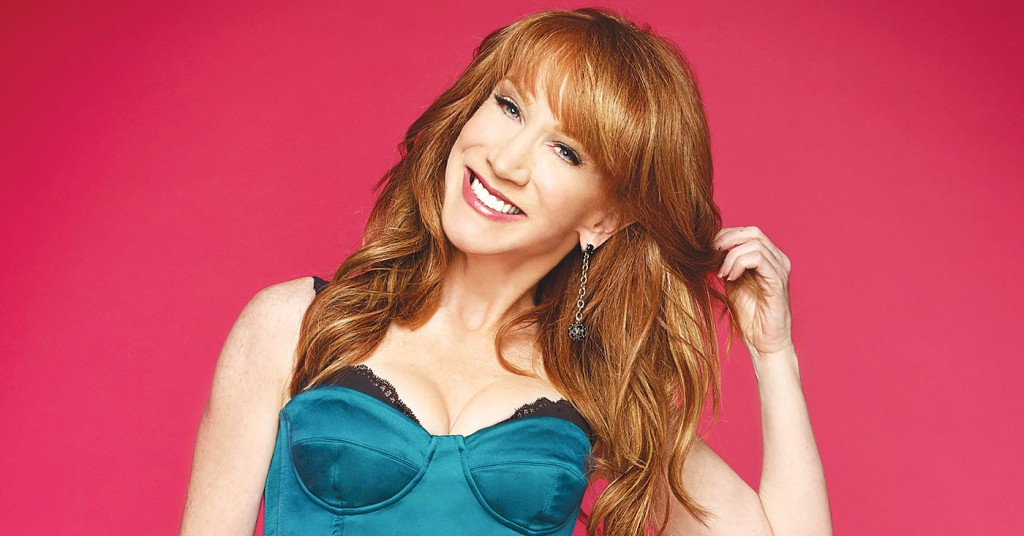 Everyone knows this sassy redhead who hails from the “D-List” (as she calls it). Kathy Griffin is a well of tell-all, behind-the-scenes celebrity anecdotes, as well as the holder of the Guiness Book of World Record for comedian with the most televised specials in history. Griffin will be returning to town this weekend on her “Like a Boss” tour, armed with all-new stories. She called in to chat with LEO about her career, sexism and more.

LEO: So you’re coming back to town…

Kathy Griffin: Yes, when I play Horseshoe Casino on Nov. 13. You should know that the night before, on Nov. 12, I will have played to a sold-out show at Carnegie Hall. So the good people of Elizabeth, Indiana, better be nice to me, because the night before I will have been in Carnegie-effing-Hall.

LEO: I hate to freak you out, but that’s also Friday the 13th.

KG: I’m looking at the cover of [The LEO’s] website as we speak. I see a story that’s titled “Inside Zombie City” — I really hope no one from the audience actually comes dressed as a zombie!

LEO: Why did you name this tour “Like a Boss”?

LEO: This is a long tour for a comedian.

KG: Yeah, for whatever reason I wanted to cram 80 cities into one year. I recently saw Chris Rock and I told him I was doing this 80 city tour, he asked me if I owed child support. I just love doing stand-up, every city is different, every market is different, and this year with the new political landscape, it’s comedy gold. And I’ll be honest, I think at this point I’ve seen more of the “real” America than any of these candidates. I think they should all be traveling comedians first and then run for president.

LEO: I saw you were invited to help hand out the Mark Twain Prize for comedy with Chris Rock. That had to be a great night.

LEO: In such a politically correct world now, you don’t offer apologies. Why is that?

KG: Ten years ago, before all of this social media, you never really knew where celebrities stood on things. Now you have the biggest stars in the world using social media to take pictures of their lunch, or some ridiculous comment, or they’re getting hacked, or they’re apologizing … and that’s something I don’t do. I’m old school in that way. I don’t apologize for jokes. I never have and never will. I mean, I’ll apologize if I step on your toe or if we go out to dinner and I’m 20 minutes late. But apologizing for jokes, I’m not about to start doing that any time soon.

LEO: Apologizing for jokes seems like a slippery slope.

KG: It’s already slipped and it’s a landslide. Being in New York one night, Indiana the next night, and Michigan the following night, I can’t even begin to keep track of how or where I would apologize. You can’t have three more different audiences with different expectations, so I just have to be up there and just be as funny as I can be. And my brand of comedy is definitely a certain amount of shock and awe; but it’s all true stories from my life because there’s a lot of joke thieving going on, and you can’t steal things that happened to me.

LEO: Bringing that up, how do you feel about Amy Schumer recently being unfairly accused of stealing material?

KG: Well, I’m going to play the sexism card from the bottom of the deck. Amy is having so much success right now; I am 54 years old, and as long as I have been in comedy, everyone from my beloved male counterparts to just men on the street, they have a real issue with a female comic becoming successful. Amy sold out Madison Square Garden, where the Knicks play, not the little theater that’s attached to it. She wrote and starred in a summer blockbuster. Amy has achieved a level of success that up until now has been unique to men, and I think that’s why she’s under scrutiny at this moment.

LEO: Based on your relationship with Steve Wozniak, I was wondering how well you thought the new film “Steve Jobs” portrayed the man you know.

KG: Oh my gosh, I haven’t seen it yet, but only because if I go to a theater now, I am the person that freaks out if someone is on their cell phone. Traveling so much, I usually catch up on movies in hotel rooms on-demand, but I will definitely see it. I’m a big Aaron Sorkin fan.  I’ve talked to Woz about how he’s been portrayed many times, and sometimes he likes it, sometimes he doesn’t. But I haven’t talked to him about this movie. Every time I play his neck of the woods, we get together. I really love that he and I are still pals. He is a one-of-a-kind, unique individual, and a legit genius … and I’m very drawn to people like
that.