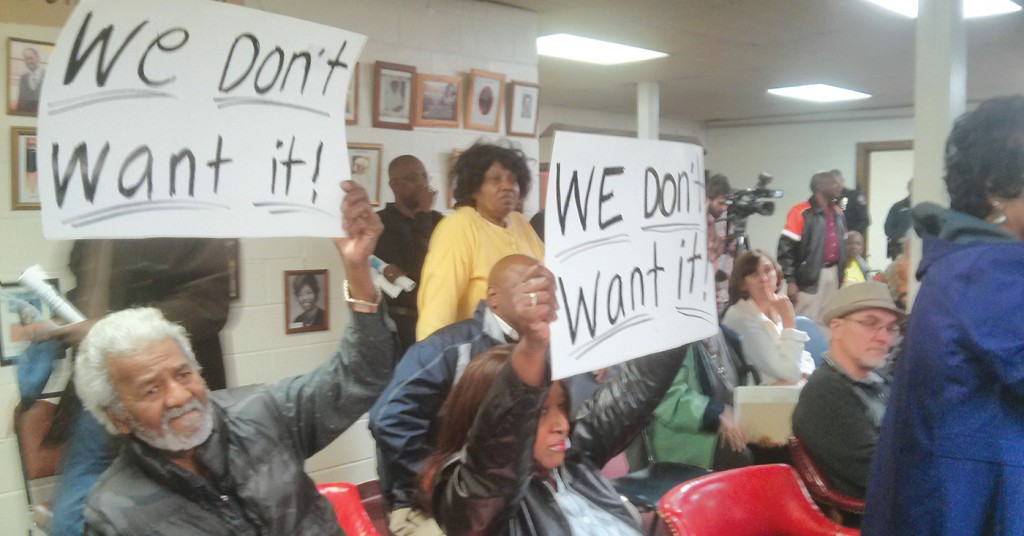 Protestor at the meeting.Photo by Ethan Smith

The debate over building anaerobic digesters in West Louisville came to a messy, muddled halt on Thursday, Oct. 29, as a representative from the EPA was invited to King Solomon’s Baptist Church by the mayor to “educate” concerned West Louisville residents about the project.

Steve Rock, an environmental officer with the Environmental Protection Agency (EPA) gave a presentation on the technology involved with the proposed digesters, but emphasized that the federal government had no say in the project.

“We are here purely as objective scientists. I could not take a stand on this specific site, and we have no authority over this,” said Rock. “Oddly enough we are from the government and we’re here to help. But I have to warn you, now that we’re here, we’re going to be hard to get rid of.”

The comment brought nervous laughter from the group of West Louisville residents who are already feeling pressured by their city  government to voice approval of the project.

“Why are we having these meetings if the mayor and Metro are just going to push this thing down our throats whether we like it or not? We don’t want it!” said one concerned resident.

Although Rock couldn’t address the question of location, he did directly address some of the community’s other concerns:

Odor: “Methane is an odorless gas. They add the odor to the gas so that you can find it when there is a leak. […] I have been in the midst of some digesters where you can’t smell anything at all, and then some you can smell from a mile away. It really depends on the individual operation.”

Air Quality: “Methane is much, much lighter than air. So should it leak it from the digesters, it would rapidly ascend into the atmosphere and wouldn’t be around the neighborhood long enough to affect anyone.”

Safety: “Can methane blow up? Sure. But to blow it up you would need two things, oxygen and fire. Anaerobic digesters are a sealed system and the methane wouldn’t come into contact with either. […] There have been no explosions in the U.S. or to my knowledge in Europe.”

But with no moderator present, many residents seized the opportunity to vent their frustration about the project for extended periods of time, repeatedly asking “Why in West Louisville?”

Brian Zoeller, attorney for Star Energy, said the reason the digesters needed to be in West Louisville was because it was near the fuel source (Heaven Hill Distillers’ spent grains) and that moving it away would cause more truck traffic in the neighborhood, as Heaven Hill would then have to truck the grains off site.

Zoeller also said that Star Energy is committed to being a “good neighbor” and told residents that they would be spending $1 million dollars on air filtration equipment, placing an air monitoring system on location and making all of the data a matter of public record, allowing the fertilizer by-product created by the digesters to be given to local residents and businesses free of charge and that they were also looking into buying a nearby abandoned building to turn into a community center.

But many West Louisville residents still said they don’t want it in their neighborhood.

“We keep asking them to justify this with benefits to the community, but I don’t think we should make any apologies for not wanting something in our neighborhood that they don’t want in their neighborhood,” said one concerned resident. “We are already dealing with a number of industrial insults in our community and we don’t want another.”

Despite the fact that the mayor’s 60 day period of “education” has expired, Star Energy still hasn’t decided whether or not to move forward with the project. Keith Hackett, Division Director for Waste Management, said that this ongoing discussion has lost sight of the bigger picture.

“I’m going to be very honest people, at the end of the day we’re all going to have to divert waste from the landfill,” said Hackett. “Twenty percent of the landfill is food waste, and the mayor’s goal is to reduce all food waste in Louisville by 90 percent by 2042. So in the big picture we all need to do our part.”