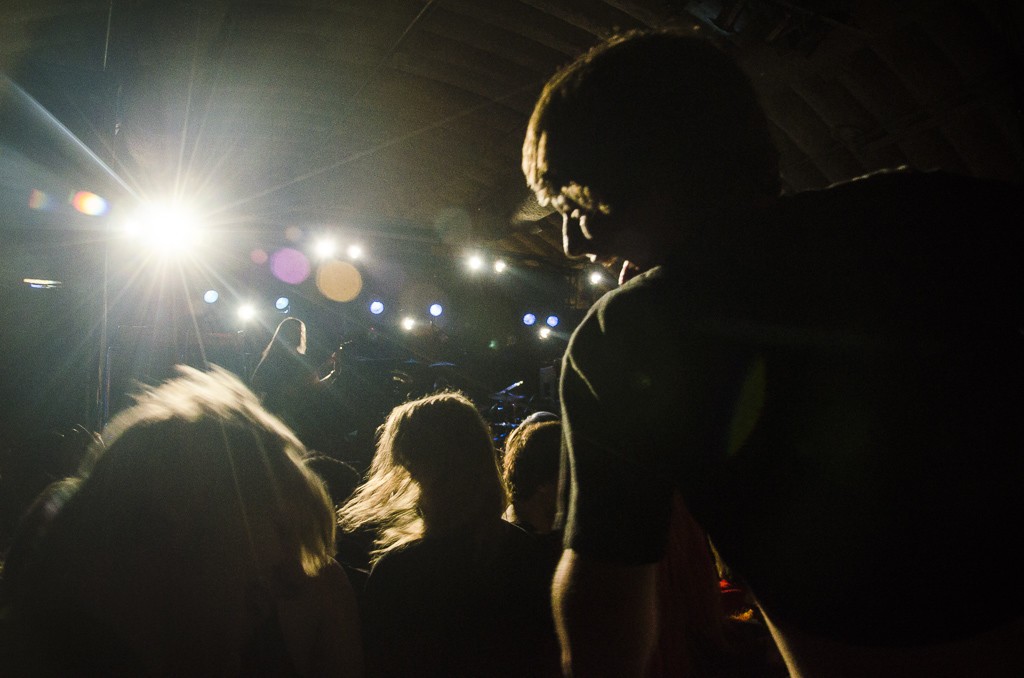 [ All photos by Nik Vechery]

Although Louisville certainly gets its fair share of metal concerts, a lot of bigger tours tend to bypass us for whatever reason. So when a show with death metal heavyweights Cannibal Corpse and Cattle Decapitation was announced, this quickly became a show I couldn’t miss. With LEO photographer Nik Vechery accompanying me, we headed out to Expo 5 in search of the cathartic release that live metal music captures so well.

The show featured only one local act, the black metal group known as Order Of Leviathan who opened. Unfortunately I only caught  the last half of one of their songs, which meant Nik didn’t get a picture of them. However, I could hear most of their set while waiting in the long line to get in. Having seen Order Of Leviathan live before, I can confidently say they put on a much better performance this time. Aided partially by the fact that when I saw them last, the power at the venue went out during their set, which threw the band off.

Next up to play was technical death metal unit Soreption, who hail from Sweden. Knowing their material as well as I do, they played a near flawless set with very few flubs, which is an impressive feat considering the complex nature of their music. One of Soreption’s best selling points is their atypical integration of big chunky grooves woven within the shredding full-throttle backbone their songs rely on. This aspect of their sound translated very well live and you could tell that this really gave concertgoers who had never heard them a hook of sorts to latch onto. Several times during their set, their vocalist, guitarist and bassist united for a triple vocal attack, which sounded pretty damn frightening. After their set, I spoke with their guitarist and complimented them on their set only to find out he is actually their bassist and was merely filling in for their sole guitarist. Knowing that just impressed me even more when thinking about their excellent performance.

Cattle Decapitation went on after Soreption and flawlessly performed a large part of their new full-length, “The Anthropocene Extinction.” Although they did dip into their back catalogue a bit, playing songs from a few years ago including “Forced Gender Reassignment.” The band gave it their all on stage, and they delivered on their reputation as a ferocious live force who put on a hell of a show. Vocalist Travis Ryan definitely lived up to his well earned status as one of the greatest death metal vocalists ever. He employed near inhuman growls, caustic black metal screams, as well as hitting a distorted kind of singing range he has added to his arsenal over the last two records. Sole guitarist Josh Elmore played like a man possessed, with a fervor and dexterity that few can touch. Bassist Derek Engemann and drummer Dave Mcgraw did an admirable job locking down the chaotic rhythm section and keeping things tight. It was especially impressive to see their drummer’s hard-hitting style collide with the insanely fast tempos the band’s music consists of. Hearing him live sounded like a jackhammer boring its way through your head. All in all, I think Cattle Decapitation put on the most electrifying and passionate performance of the night.

After Cattle Decapitation’s set ended, it was time for death metal legends Cannibal Corpse to prove they’ve still got it after being a band for almost 30 years now. Needless to say, they played with a smooth finesse that can only come from many years of playing together. And while it didn’t exactly feel like their set was an exercise in going through the motions, it did seem to lack a certain vitality. The band sounded incredible though, which I suspect was due to the face that they brought their own sound guy on tour. Because Cannibal Corpse dropped a new record last year called “A Skeletal Domain,” they made sure to play a few songs off that. But overall, their set list consisted of a song from every one of their records. Naturally there were a few universal fan favorites played, such as “Hammer Smashed Face” and “I Cum Blood” among others. The highlights of their performance had to be seeing lead guitarist Pat O’Brien tear through numerous killer solos; being able to hear their talented bass player Alex Webster much easier than on record; and experiencing the earthshaking vocals of George Corpsegrinder Fisher live.