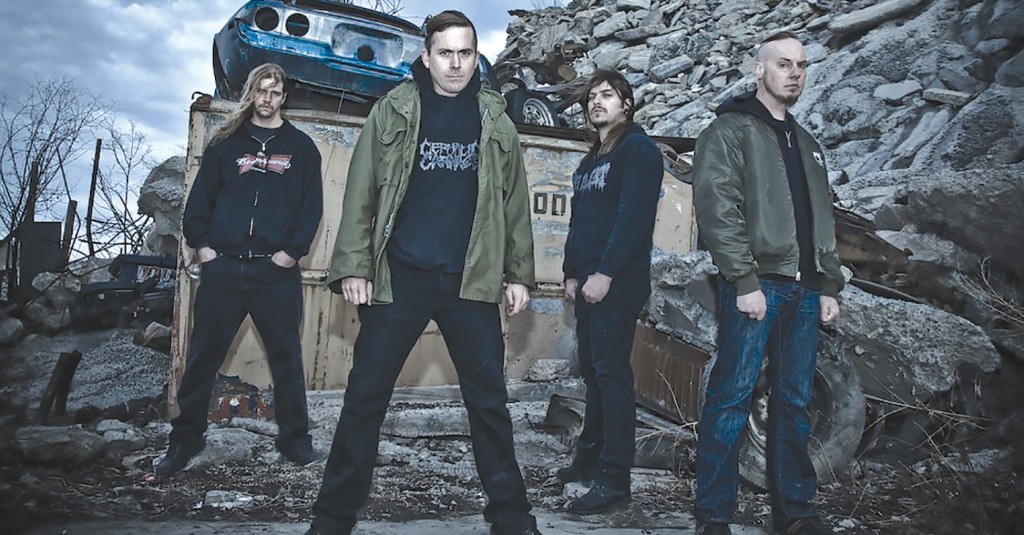 Momentum is everything in niche genres like death metal. So when Cattle Decapitation’s last record, “Monolith of Inhumanity,” took the metal world by storm, they were well-positioned to release a follow-up that was sure to be highly anticipated. Now that their newest record, “The Anthropocene Extinction,” has recently come out, guitarist Josh Elmore spoke with LEO about a variety of topics related to the band’s inner workings and their storied career.

LEO: After “Monolith of Inhumanity” was such a massive success, were you all worried about how to follow it up without repeating yourselves or letting the fans down?

Josh Elmore: I think people expected us to get kind of weak because of the wailing melodic stuff we introduced on “Monolith of Inhumanity.” And so maybe subconsciously we said no, and tried to make the next record a little more aggressive. The band has always had a kind of manic, hectic sound. We didn’t want to lose that. Over time we’ve evolved to be able to harness that feeling and emotion in the music in a manner that’s a little more calculated, as opposed to being like a happy accident.

LEO: What do you think it is that Cattle Decapitation does differently that has allowed you to get so big?

JE: I think, over the past few records, we’ve finally caught up musically, ability wise, or whatever, to where our ability to execute our ideas has caught up with our vision. People have been hearing us for 20 years, and, at one point, they may have picked up a record and said, “Eh, it’s not for me.” And then I think we’ve kind of had those people who stopped listening earlier start to revisit us after they heard their friends talking about whatever our new record at the time was.

LEO: Cattle Decapitation was originally a group where everyone was a vegetarian. Is that still the case?

JE: Well, currently, Travis Ryan and I are the only two vegetarians in the band. When we are on tour, Derek and Dave can do what they want. It’s not like we say we are going to our little veggie spot and you guys do whatever. Basically getting done what we need to do as a band on tour is what matters to us. We’ve found a few places though we can all agree on. Sometimes you’re in cities and there’s a great vegan place, but the other guys aren’t really into it. So getting to the venue on time always takes precedent over personal needs. We are a band first, so it’s not really a problem that we have different beliefs.

LEO: What fuels you as a musician when writing music?

JE: I’ve always been into swirling chaos, music that’s right at the edge, tension wise. Just a sense of chaos to it, sort of like a howling wind texture within the music. I know, for me personally, I just wanted to incorporate more of a feel similar to the idea of being in the midst of a tornado with the new stuff. And try to combine that with songwriting that’s memorable. That’s a hard thing to do. I think people automatically gravitate to what sounds familiar. Some people just want some stomping riffs, which is fine. But, to keep things interesting, and to evolve with what we do, we have to challenge ourselves to have this next level intensity. Like this panicked feeling, but have it in the context of the best songs we could possibly write. I think, as a band, we’ve moved to a different place where technicality isn’t the whole package. I think a good ripping chord progression can say as much, if not more, than mere flashy playing. We’re going for something more dynamic.

LEO: What drove you all to focus on “The Anthropocene Extinction” going on all around us?

JE: A lot of it came from our vocalist Travis, due to the research he did for the record’s lyrics, and how depressing it was the further he delved into it. I don’t see how you can see some of that stuff and just shy away from it and say it doesn’t matter. We aren’t saying we are going out and picking up trash on the beach. We aren’t expecting that, though that’s been people’s response sometimes, like, “I don’t see you out there.” We aren’t pointing fingers, it’s a more general human problem. We say what we say from a perspective of living in a very privileged society, meanwhile two thirds of the world’s population is barely able to eat and survive.