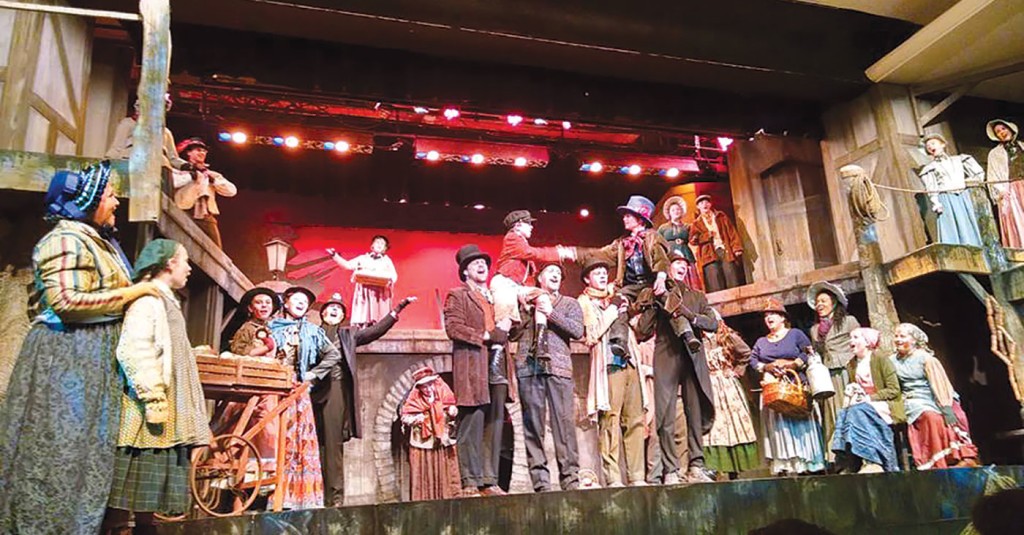 By the time the original London production of Lionel Bart’s musical “Oliver!” closed in 1966, it had long since set a record as the longest running musical in the illustrious history of the British stage. By that point, the cast had gone through 11 Olivers and 10 Artful Dodgers. And reports indicate that more than 700 young actors playing waifs on London streets had aged out of their parts.

By now, given the Broadway run (during which future Monkee Davy Jones earned a Tony nomination), the half-dozen or so London and Broadway revivals, and the generations of productions that have run in school and community theaters around the world, you could likely populate a city the size of London with “Oliver!” alums.

The current CenterStage at the Jewish Community Center production, which closes this weekend, adds another couple of dozen talented youngsters to the roster. And it does a fine job of demonstrating why this very, very loose musical adaptation — which strips out, distorts and reshapes great stretches of Charles’ Dickens’ “Oliver Twist,” and distills the novel down to a fast-paced series of clever production numbers, sweet ballads and a handful of vividly drawn characters, continues to charm audiences.

Here, the orphaned title character is played by fifth grade student Charlie Norman, whose wide-eyed innocence, light, pleasant voice and confident presence are well-suited to the part (and its yearning signature tune, “Where Is Love?”). After Oliver and a feisty group of waifs sing a song of protest about their meager portion of workhouse gruel (“Food, Glorious Food”), Oliver musters the courage to ask for more.

Of course, he won’t get what he wants — but the audience gets a nice batch of droll songs from some fine character actors as the keepers of the workhouse (Frank Goodloe III and Glenna Godsey) express their outrage at Oliver’s presumption, then traffic him to a pair of entrepreneurial undertakers with a knack for thinking outside the coffin (Barbara Myerson Katz and Sam Mannino). Then things go bad between Oliver and his co-workers (Bailey Pierce and Cory Regrut), and he flees for the streets of London.

There, he meets the Artful Dodger (played with brash, winning energy by Riley McNerny) and as jovial an academy of crooks as you can imagine, all under the tutelage of the notorious Fagin (Michael Drury, who revels in revealing the moral ambiguity implicit in Bart’s revisionist approach to the character).

Oliver’s simple nobility and the Victorian fantasy (still commonly held today) that wealth is a sign of virtue and that virtue is an inherited trait, are prominent in this tale – and embodied by the bookish Mr. Brownlow (Jim Craig), whose redemptive trust in Oliver is a beacon of moral rectitude. But the story’s juice is found in the flawed characters who live in the cheerily depicted underbelly of the city. There’s Nancy (Jessica Adamson), who has a heart of gold and sings movingly about her determination to stay with her abusive lover, “As Long As He Needs Me.” There’s her lover, Bill Sykes, played by Brian Bowles with fierce gleaming eyes and a powerful physical presence. And there are other effective cameos — Clark Worden as the Dodger’s pal Charley; Eden Gilbert as Nancy’s friend Bet; and a splendid group of street vendors whose evocative performance of “Who Will Buy?” is a musical highlight.

Meanwhile, at the Baron’s Theater, a different sort of musical hits the stage this weekend. “Failure: A Love Story,” by Philip Dawkins, premiered in 2012 at Chicago’s Victory Gardens Theater, long a prestigious incubator of new plays. Since then, this play (set in a family-owned Chicago clock shop in the 1920s) has garnered intriguing rave notices at some of America’s most interesting independent theater companies. So it’s not at all surprising that Louisville’s theatre [502], with its focus on innovative recent works, is presenting the play’s Louisville premiere.

As nearly as I can tell — based on YouTube excerpts, published interviews and a slew of reviews — the script allows so many production liberties that it’s impossible to predict how the play will look on stage. (Heck, it’s not even possible to predict whether some of the characters will be portrayed by humans or by puppets). But you can count on musical echoes of the 1920s, a dollop of fateful romance and the implacable tick-tock (or tock-tick) of time passing in one direction or another. And with Gil Reyes directing, Jesse AlFord, Melinda Crecelius, Tamara Dearing, Laura Ellis, Eli Keel, Jon O’Brien, Victoria Reibel and Bryce Wiebe, you can count certainly count on an entertaining, provocative experience.