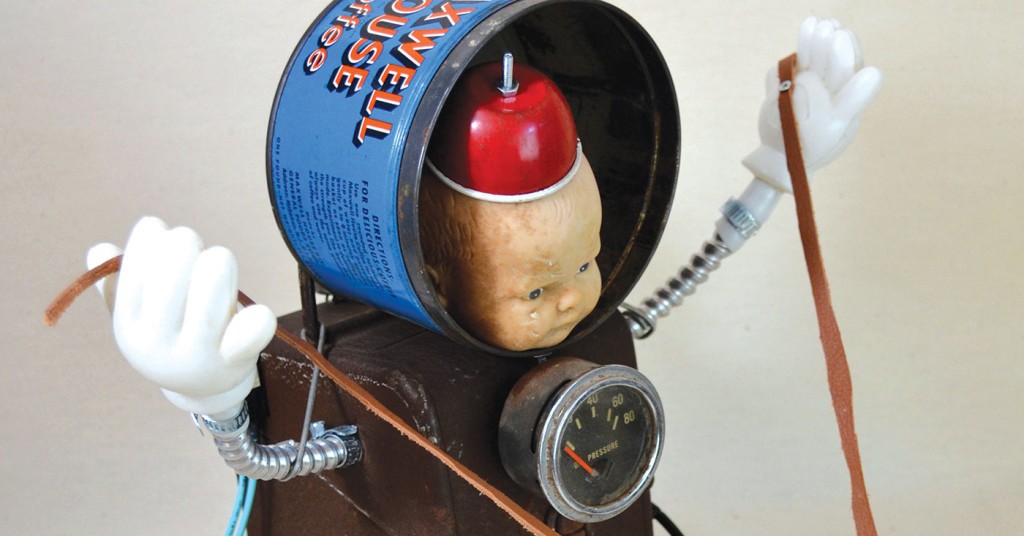 With so many art and music festivals in Louisville, it can be hard for a festival to distinguish itself amid the fray. The Good Folk Festival, a folk art festival making a triumphant return this year at a new venue, has always hewn a strong aesthetic that helps it stand out from the pack.

“In the textbook, ‘folk art’ would be related to people who never went to a university or art school, or studied under somebody,”  said festival founder and organizer Scott Scarboro. But definitions don’t limit Scarboro’s choice of artists for the festival. “Some of those terms, you can just throw them out the window at a certain point.”

Traditional folk art runs more to corn husk dolls and walking sticks, and you’ll find that at Good Folk, but the word folk come from the german volk, and simply means people.

The Good Folk Festival moves beyond traditional folk art and includes works that speak more of the experience of volk living in the ‘ville. There will be graffiti artists at the festival, as well artists who work with used car parts, and even bone. “They just make it for the sake of making it,” Scarboro explained, “out of whatever they can find.”

Scarboro mentions a formative visit to well known folk artist, the Reverend Howard Finster. Finster is best known for creating album covers for Talking Heads, and R.E.M. shot the video for “Radio Free Europe” at his farm. “I went down there and met him, and he’s painting on the sides of barns and making things out of bicycles. I started thinking about graffiti artists and how they are similar to these barn paintings,” said Scarboro.

The festival has 70 booths, some representing more than one artist. There is a family from Eastern Kentucky bringing three generations of artists. Several booths, like the booth run by Louisville’s own StudioWorks, rep work from differently-abled artists.

While festival goers are checking out the 70 plus artists, they can enjoy a varied music lineup. When it comes time for Scarboro to pick bands, he keeps the artists and the festivals aesthetic in mind: “I try to find musicians that complement that. I have one-man bands, I have Cher Von, I have traditional string bands as well. The art and the music complement each other.”

Scarboro admits that there is another criterion for music — his personal taste: “That’s what I like about doing this festival. All my favorite musicians are coming to one place. I curated my favorite party.”

This is the fifth iteration of the Good Folk Festival, which began life at the Mellwood Arts Center. It’s not a yearly event, and Scarboro says that running a festival can leave organizers feeling drained, especially if they are doing it in their spare time. “You get worn out, and you think, I’m never going to do this again.” But the community always convinces him to bring it back. “You go out, and people say, ‘I’m really looking forward to it; it was inspiring,’ and you think, ‘OK, maybe I’ll do it again.’”

Scarboro is excited for the festival to move to Tim Faulkner Gallery and notes that finding the the right venue is crucial to running a good festival. In addition to great artists and music, the Tim Faulkner Bar will be open, food trucks will provide nosh, and McQuixote Books and Coffee will be serving tasty tea, coffee and espresso.