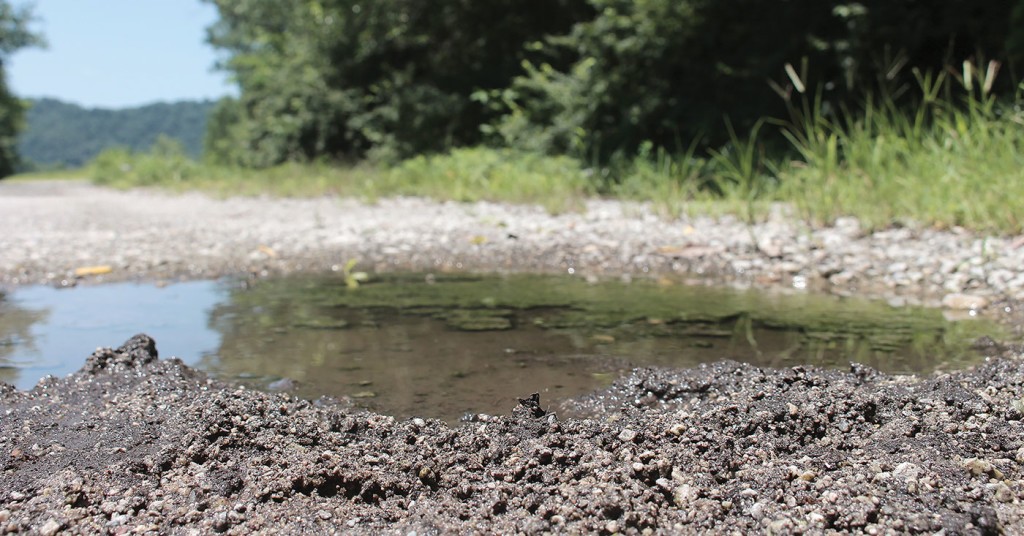 A cloud of coal ash coats the homes and cars of neighbors; kids play basketball at a park with two smokestacks towering overhead; and nearby a man fishes out of a pond so polluted that his catch could lead to cancer. This is the state of environmental injustice in West Louisville.

“Environmental injustice exists when one segment of the population is affected adversely by the environment more so than others,” said Tim Darst of the Passionist Earth and Spirit Center. “And if someone says there isn’t injustice and all is fair in Louisville, then they should be willing to trade places with anyone in the city, right? Would they swap places with someone who lives near a coal-fired power plant? Or a chemical plant? Toxic landfill? Polluted lake? There’s quite a few in West Louisville. So I think it’s safe to say we still have a lot of work to do.”

According to the Metro Public Health Department, 30.3 percent of West Louisville residents live with a symptom or illness caused by outdoor air pollution, compared to just 16 percent in East Louisville. And since Louisville Metro Air Pollution Control District only monitors for six major air pollutants required by the Clean Air Act and UofL lost its funding to monitor air quality more comprehensively for hazardous pollutants, we don’t know exactly what levels of pollution the city is being exposed to.

“Environmental justice problems tend to affect the poor and vulnerable first and hardest,” said Darst. “And sadly it’s a common theme in environmental justice that low income people usually don’t have enough political pull to change laws or even  get them enforced in the first place.”

To spread awareness about this issue, Darst and the Passionist Earth and Spirit Center began hosting environmental justice tours. LEO decided to jump on board the bus and investigate the many industrial insults in West Louisville.

According to a report by the NAACP in 2012,  “Among those living within three miles of a coal power plant, 39 percent are people of color — a figure that is higher than the 36 percent proportion of people of color in the total U.S. population.”

And in West Louisville’s largest green space, Shawnee Park, the Gallagher coal fired power plant looms less than a half a mile away across the river in New Albany, Indiana.

“The Gallagher plant has a history of pollution violations,” said Darst. “There have been lawsuits and violations of the EPA’s Clean Air Act. And it’s right on this neighborhood’s doorstep.”

According to the EPA, coal plants emit high levels of sulfur dioxide, particulate matter, nitrogen oxide and mercury, pollutants that can lead to lung disease, birth defects and a significantly reduced life expectancy. Duke Energy, the company behind the Gallagher plant, shut down units one and three because of their high sulfur dioxide emissions, but units two and four are still operational.

Only a few blocks away from Shawnee Park, Chickasaw Park is home to one of Louisville’s most polluted fishing ponds. The pond was tested in 1995 by the state EPA, which found that the fish within it contained high concentrations of dioxins (a cancer-causing chemical).

“So they drained the pond, removed all of the fish and filled the pond back up with clean water,” said Darst. “But when they tested the pond again, they still found dioxins. They were at lower levels but they still put up a sign advising people not to eat the fish from the pond.”

But Chickasaw Park’s fishing pond isn’t the only polluted body of water in Louisville. According to the Kentucky Department of Fish & Wildlife, all bodies of water in the state are under advisory for mercury pollution, which bioaccumulates in animals. Eating fish from these polluted bodies of water could cause birth defects, neurological disorders and a shorter life expectancy.

Lake Dreamland was once a vacation destination for those in Louisville who could afford to buy a quaint little summer cottage. But after the Ohio River flooded most of West Louisville in 1937, a floodwall was constructed that cut off Lake Dreamland from any further development. The community was denied access to electricity, running water and wastewater treatment.

“Instead of having their wastewater treated and cleaned before going back into the river,” said Darst. “The water is released into these ‘constructed pits’ which is filtered through these rocks, and it goes back into the groundwater, untreated.”

According to a report by Russ Barnett, director of the Kentucky Institute for the Environmental and Sustainable Development, the city did attempt to install septic tanks for all residents in 1987, but it proved too costly and the program was cut, leaving most homes with this “constructed pits” system.

Originally a sand and gravel quarry, this riverside property with a 120-foot deep pit was turned into a landfill by its owner.

“These days you are supposed to line a landfill with large sheets of plastic and make sure that nothing can leech out into the groundwater or contaminate the soil,” said Darst. “But they didn’t do that here. They just filled it up and buried it.”

According to Barnett’s report, the 112-acre landfill now has 212,400 tons of domestic, commercial and industrial waste — waste that is buried on the shores of the Ohio River and in a floodplain, which means that anything buried there is in contact with the Ohio River.

The problem wasn’t addressed until residents in the area started to complain about seeing “blue sheets of flame” coming out of their water heaters. As with any landfill, the buried waste began to degrade and emit methane, which was escaping into the nearby community. In 1982, the site experienced a $2.2 million cleanup by the EPA.

“But all they did was clean off the toxic topsoil,” said Darst. “They left all the tons of waste buried beneath there. So that is all still leeching into the groundwater and Ohio River.”

During the cleanup the EPA also found 400 exposed drums of hazardous materials that weren’t supposed to be there. The EPA has since taken control of the site, reinforced the landfill with a rock wall to prevent further erosion and is currently debating the future of the property.

LG&E’s Cane Run Power Plant operated six coal burning units from 1954 – 1987 and three units from 1987 – 2015. At the height of production it went through about 1.5 million tons of coal a year. To accommodate the tremendous amount of coal ash (a by-product of burning coal), LG&E created a landfill.

And even though today the plant runs entirely on natural gas, there is still a 14-story-tall, mile-long pile of coal ash, known as Coal Ash Mountain, which overlooks a residential neighborhood.

“People here would have to get up every morning and clean the coal ash off their car before they could go to work,” said Darst. “And when they called to complain to LG&E, they would just send them a voucher for a car wash.”

But as residents got fed up and began taking photographs of large coal ash clouds coming from the nearby plant, LG&E responded by putting up a 50-foot-tall, 223-foot-long screen that they said was to help protect the neighbors, but Darst believes it was simply to prevent them from taking more photos.

LG&E has also started growing grass on top of the coal ash pile to try and prevent it from blowing away. Darst said he doubts it’s effective.

“Either way, this coal is exposed to open air,” said Darst. “So every time it rains or snows, that ash rolls off the hill with the rainwater right into the groundwater or the Ohio River.”

According to the EPA, people living near coal ash landfills or dumps have a 1 in 50 chance of developing cancer, as well as an increased risk to liver, kidney and lung damage.

Heaven Hill has come under fire recently for their proposed deal with STAR energy to develop a number of anaerobic digesters (referred to as “methane plants” by those in the community) on the property. The digesters would recycle spent grains and act as a large-scale compost facility. Mayor Greg Fischer and others have touted the project as a green initiative for the city, but Councilman David James (D-6) feels it isn’t a good fit for West Louisville.

Many in West Louisville are wary of this project and Heaven Hill’s claims that they are a “good neighbor” because of past problems, mainly the “whiskey fungus.”

The fungus, baudoinia compniacensis, is fed by the ethanol vapors that come from whiskey production, often referred to in the industry as the “angel’s share.”

“This black fungus covers these houses and destroys people’s homes,” said Darst. “You can see why many of these houses have ‘no methane plants in West Louisville’ signs in their yards.”

These seven sites represent a small selection of the many environmental insjustices in West Louisville. There are also a number of chemical companies near residential homes, so close that when a spill occurs residents have to “shelter inside” until they receive an “all clear” notice. Among these companies is the Black Leaf Chemical Co., which manufactured DDT and left a pollution footprint several blocks wide. The list goes on.

While residents of West Louisville are disproportionately affected by the dangers of living in close proximity to hazardous and polluted sites such as these, the pollution created in these areas affects everyone who lives and breathes in Louisville.

The title of Looking For Lilith Theatre Company’s recent production, “Prevailing Winds,” alludes to this interconnectedness. “Prevailing Winds” is a documentary play based on two years of extensive interviews with West Louisville residents, industry representatives, activists and members of the media. The play highlights the many ways in which the community has failed to protect its citizens from environmental hazards, but also points to some success stories. Most important, the Strategic Toxic Air Reduction (STAR) Program of the Louisville Metro Air Pollution Control District, implemented in 2005 in response to studies showing that Louisville’s air quality was among the worst in the country. While STAR has led to improvements, the EPA still ranks Louisville fourth in the nation for toxic air pollution from industrial sources.

But there is hope.

“People are starting to speak up,” said Councilman James. “They’re realizing they can make a difference and change the course of their community.”

Darst agrees and points to the fact that things are starting to change in West Louisville. He points to Park DuValle, the development of the Portland area and the fact that people are organizing around issues like the “methane plant.”

“I think people had just learned to live with adversity,” said Darst. “But with social media, people are finding their voice, and hopefully as we trend towards a higher understanding of enviormental issues, we can make Louisville a healthy place to live for everyone.”

Darst said that people need to realize that environmental justice isn’t only about helping to save the whales or the spotted owl. It’s about helping your neighbors live healthy, happy lives. And hopefully people will realize that everytime they leave the lights on in the house, or crank up the AC or heat, their actions have real world consequences for the health of their neighbors. •