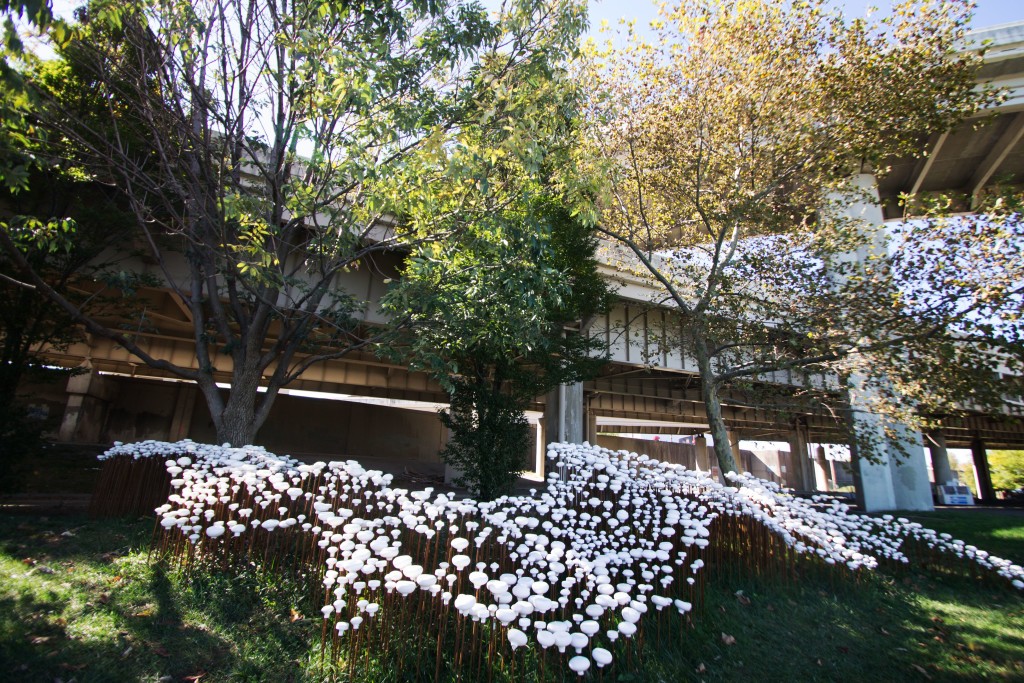 [The above image is “Beneath the Surface” by Mary Carothers. Photo by Kelsi Wermuth]

The Louisville Commission on Public Art’s first project is “Connect/Disconnect.” The five works by six artists are placed along the Ohio River between 8th and 12th Streets. They will be on display until Nov. 30.

LEO: The art of “Connect/Disconnect” is site specific. How does your work relate to Louisville?

Mary Carothers: My installation “Beneath the Surface” consists of over 2,400 porcelain casts of doorknobs. I chose to work in porcelain as a way to acknowledge the white clay deposits of the Ohio River and to create a topography of doorknobs to recognize various people and industries connected to this site.

Among the doorknobs in the collection you can find a L&N doorknob, one from a tobacco warehouse located between 10th and 11th on Main and one from a Traveler’s Gypsy wagon. The lion comes from Belfast, Northern Ireland. It is from the door of the rectory beside St. Marks Church and was the writer C. S. Lewis’ inspiration for the character Aslan in “The Chronicles of Narnia.” Including this knob provided me the opportunity to recall Bloody Monday, an act of mob violence toward Irish Catholic immigrants that occurred at the site in 1855.

Among those I personally created include a small hand holding a banana. Local historian Tom Owen informed me that this area was once referred to as “Little Panama.” Bananas were shipped up the Mississippi, on the Ohio River and distributed from this area to the Midwest region. The hair bun was created in honor of Elmer Lucille Allen, the first African American to work as a chemist for Brown-Forman.

The installation’s form is inspired by the movement of the Ohio River.

Jenny Kendler: “Field of Vision: A Garden for Others” was not only inspired by the unique ecology of the site near the Ohio River, but looks towards connecting Louisvillians more deeply with their native environment.

While visiting the site, I noticed that butterflies were using the river as a highway of sorts, but because the area had little native vegetation, they had no reason to stop. Similarly, though a nice path passed by the project site used by cyclists and pedestrians, they too had little reason to stop at this site. I wanted to find a way to have both these populations —humans and pollinators — pause to enjoy the site, and also to moreover connect these two groups, so I created a sculptural reclaimed wood butterfly garden, filled with wildflowers native to the Louisville area.

Moreover the garden used ultraviolet light at night from solar power lamps to allow human visitors to get a sense of what it might be like to “see in butterfly vision.” The garden not only attracted butterflies almost immediately (within three days we had baby monarch caterpillars thriving on the native milkweed) but it also brought groups of people from downtown who would come to the site to eat their lunch or watch the sun set.

Mark Reigelman II: Unlike most American cities, which were selected based on their strategic locations, Louisville became populated because of complete inconvenience. Early settlers used the Ohio River as a major transportation and trading route but, because of the Falls of the Ohio, were forced to unload (disconnect) their possessions, which were often sealed in barrels, carry them around the falls, and reload (connect) before continuing on their already challenging journey.

This process took many days for most travelers so food and shelter was provided by local settlers for this early portage site. These barrels securely housed and transported everything from gold and metal hardware to tobacco and fabric throughout the United States. They were an ideal vessel because they offered a watertight seal, an individual was able transport barrels around the falls without assistance, and they stacked neatly in massive pyramidal forms.

For [me], the barrel became the obvious symbol of this riverfront city. By combining salvaged wooden barrels with sleek saturated mirrored surfaces, “Upriver/Downriver” highlights the unique history of this post-industrial river community while reflecting its forward-thinking culture.

Jean Shin: I was interested in creating a special project for Louisville where the materials and labor were sourced locally. When I visited Louisville in the spring, the river had recently flooded so there were huge amounts of debris deposited by the river’s edge and floating down river. I wanted to conceive of a project that would not only activate the site by bringing the community to explore their surroundings but do so in a way that would directly engage the problems of littering and its damage on the environment.

In the summer, working with local organizations like Brightside, artists, public art enthusiasts and students from the University of Louisville, we brought the community together to clean up the debris on the riverfront as part of the public art-making process. The public removed large amounts of detritus from the site, filling up dozens of trash bags. My local team and I then selected colorful plastic vessels and bottles to embed them into the existing concrete path along the riverfront.

The project “Anthropocene Fossils” was inspired by ancient fossil beds across the Ohio River, imagining what contemporary fossils preserved on the site would look like on this side of the river. Like fossil fuels, this petroleum-based waste is perhaps our unintended legacy.

SIMPARCH (Steven Badgett and Matt Lynch): Louisville is there because of the river. There’s a surfeit of driftwood near the “Connect/Disconnect” location because of the river’s geography and subsequent dam and lock. We were interested in addressing the essence of the river, a ribbon of water defined by two shores. Waterborne debris is material representation of a river’s nature in conveying things that float, and absorbing/transforming what goes into it from land. We assembled these floating specters, captured due to the engineering of this section of the river, into an elevated sphere [we call “River Monument (glomus)”], a recontextualization of material that regularly cycles into and out of the river.