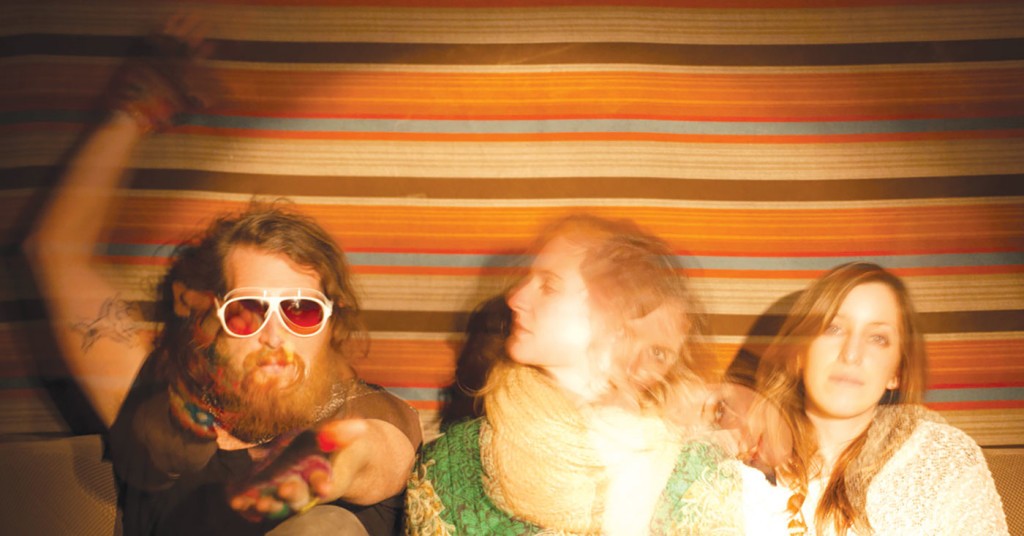 Sitting on a red L-shaped couch in the livingroom-area of La La Land Recording Studio — a massive, venerable one-floor maze of a flat that sits in between The Highlands and Downtown — the three members of Twin Limb are talking about Halloween costumes. It’s a mild late October day, and Kevin Ratterman, owner of La La Land and relatively recent addition to the band, is swiping through his smart phone, passing it to Twin Limb co-founders Lacey Guthrie and Maryliz Bender after finding a picture of a “sexy Big Bird” outfit, laughing at the sheer ridiculous humor of it. Then the conversation quickly turns to Prince’s Instagram account. In the adjoining room, an engineer is mixing the band’s first full-length, an album that was recorded in full, scrapped, completely redone, now carrying a tentative release date of spring. But, in the meantime, Twin Limb will release an EP, “Anything Is Possible and Nothing Makes Sense” on Nov. 13 — a bolder and thicker spin on some of their oldest material that will act as a placeholder, bridging the time until the LP.

“Basically, we’re releasing this EP just to get something out, and, in that time, we decided just to completely redo the album, because we’ve figured a lot out, about the dynamics and the sound of the record, and who we are as a band has really taken shape,” Ratterman says.

Even though it’s taken them longer than expected to release their first album, it’s been a good year for Twin Limb, as their popularity and buzz seems to be traveling along the same gradual incline as the development of the music — everything has been steady and incremental. They’ve toured with Houndmouth, landed a spot at Forecastle and built a notable, unique and stable sound that’s somehow both creepy and inviting, weird and accessible.

“It has taken time to get things out into the world,” Bender says. “We have been trying to carefully select the way in which we release material and that’s what’s taken so long.”

“We’ve turned down multiple offers, just because we really feel strongly about the band and the material and want it to come out right and we want to make sure it gets the proper setup and release,” Ratterman adds. “We’ve been really proud of how we’ve built this team and the people behind it. The record could have come out easily in early summer, but we were like, ‘No, this just doesn’t feel right yet.’”

Twin Limb became a band in 2013 after Guthrie and Bender met at a party, forming one of those rare and instantaneous friendships. They played music together the very next time they met up. Back in August, on the first episode of the LEO Podcast, they gave a lighthearted and semi-sarcastic remembrance of becoming so close, so quickly. Here’s a brief transcript:

Bender: We did. We realized how alike we were, because I was afraid of messaging her too soon and seeming creepy. It was like a guy trying to date a girl or vice versa.

Guthrie: It was definitely a courtship. It was really funny, and then, we figured out that we were both into it and were like, ‘Alright, screw everything else, this is happening.’

LEO: When was this?

Guthrie and Bender, simultaneously: A year and a half — October 7 of 2013.

LEO: Wait, you guys have only known each other for that long?

Guthrie: Yeah, we’re screwed. This is my life partner.

Over the next year, they recorded an EP and played out a lot, eventually making their way into La La Land in the fall of 2014, where Ratterman was set to produce the then-duo’s first full-length. When he kept bringing ideas about how to expand the band’s sound by adding new, mainly electric and electronic sounds to Twin Limb — which was mostly acoustic at the time — and started to add in some parts during the sessions, they realized they had hit a point that they didn’t want to turn back from. During the last week of recording, Twin Limb had a show scheduled and Guthrie and Bender asked Ratterman to join them on stage. Shortly after, they decided to become a trio.

Twin Limb was changing so quickly that, before the fully-recorded record was released, they decided to put it back on the shelf, as the new shift made them want to replace those first sessions at La La — recordings they were genuinely pleased with — with a more accurate representation of where they were at the moment.

“We made the album, recorded as a duo, and then I added stuff on top of it,” Ratterman says. “And we were really happy with it. The record came out well, and then, we started playing shows and touring and we kind of became, as a three-piece, a totally different band. So, we’ve been kind of biding our time for that record to come out. It seems it won’t be until next year when that record comes out. So, in order to just have something out, we decided to just record an EP. And, when we did that, we recorded older material as a three-piece, and it just took on a whole new production life.”

That EP, “Anything Is Possible and Nothing Makes Sense,” sounds very much like the Twin Limb you’ve always known — ominous, hushed, layered and dark oddball folk — except at the same time it doesn’t, with a barely recognizable accordion, stormy guitars and unstructured ambience. None of the changes are necessarily surprising, they just kind of make you wonder how high the Twin Limb sonic ceiling is.

The present meets the past

“Anything Is Possible and Nothing Makes Sense” was recorded in August of this year and the full-length was recorded a month later in September, although the members of Twin Limb say the two sound nothing alike.

“The songwriting is a lot different [on the LP],” Bender says. “She and I, once we found our sound that we were going for — I think a lot of it has to do with the fact that I was learning to play drums, to be honest, so I started writing more uptempo stuff, as I was figuring it out — we developed a wider range of tempos and dynamics in the songs on the full-length.”

“The palette is so different, the thing you can do with the sounds,” Ratterman says. “I feel like the EP is very one dimensional in a sense. The colors are different. ‘Don’t Even Think’ has this feel to it, ‘St. Agnes’ has this feel. On the full-length, the songs are almost an album in themselves, one song really has stark differences, tempo changes.”

An interesting aspect of the forthcoming full-length is that they plan to pull select parts from the previously-recorded and scrapped album, Frankenstein-ing the two together in some ways.

“We’re doing a really unique thing, which is, we have the record that we made, then we redid the record, and now we’re taking a lot of the sounds that we recorded from the original record and kind of mixing them together with the original performances, so it’s this hybrid, it’s almost this kind of remix album,” Ratterman says.

While they have been adamant about not rushing releases, and for as complex and strange as it all seems, they say that they don’t spend that much time overthinking recordings.

“We actually don’t really spend a lot of time in the studio. We work really fast,” Ratterman says. “We try to keep things really fresh and not beat things into the ground or micro-focus too much. We like to let the moment be magical and not think too much. We’ve kind of done it in reverse — making a record, then becoming a band. But, I guess doing the record twice makes it seem like we’re always in the studio.”

“The funny thing is, is that we didn’t even start with a concept,” Guthrie says. “It was just us coming together and doing what felt right, so [change] has been easy. And, for me … if you have done something a certain way a hundred times, and you’re thinking about doing something different, you just do it — your bandmates aren’t going to freak out on you or fire you or whatever.”

“I feel like the definition of Twin Limb in the Twin Limb dictionary is just constantly searching,” Ratterman says. “They started out so unique — this accordion and weird drum kit that doesn’t resemble any drum kit that I’ve ever seen — the girls were already doing something totally fresh. And, ever since I’ve been here, it’s a constant search. And, at whatever point in time that you capture it, it should feel authentic, but it won’t be like that for long.” •

Twin Limb’s EP “Anything Is Possible and Nothing Makes Sense” comes out on Friday, Nov. 13. They will also perform that day at WFPK’s Live Lunch.