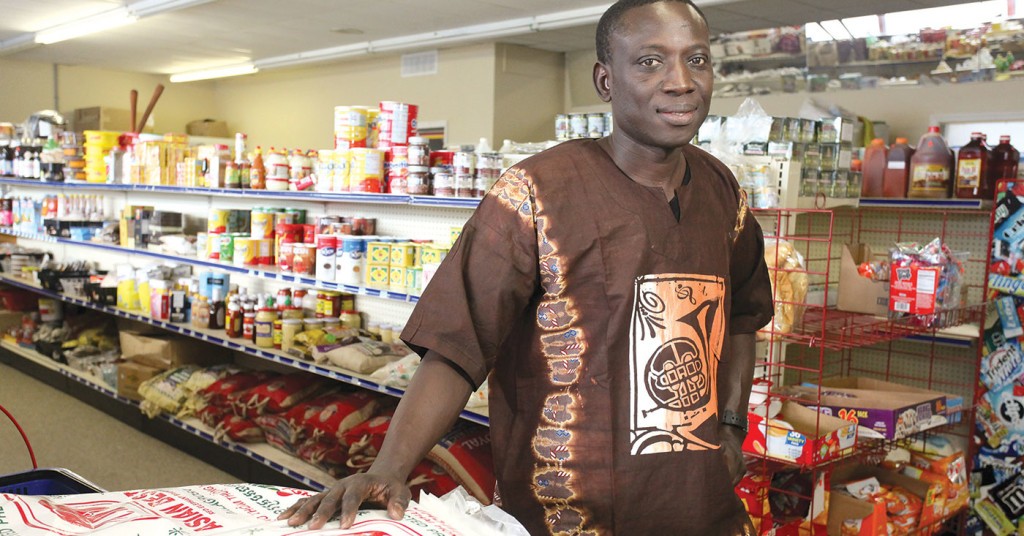 Kadiatu Jalloh deftly moves from the kitchen carrying lunch orders through the aisles of Mashallah, her family’s restaurant and grocery on Old Bardstown Road. Three rows of shelves are full of fufu, rice, palm oil, kola nuts and other West African pantry staples. An open bin of peanuts in their shells sits in front of the counter, paper sacks at the ready.

Dressed in a brightly patterned traditional top and black hijab, Jalloh laughs and chats with the customers, many clearly regulars, bagging their to-go orders as a son minds the register.

Mashallah is a family-owned business — Jalloh handles the restaurant, her husband runs the grocery, and their children help out with both. Born in Sierra Leone, Jalloh is among many new immigrant neighbors who’ve worked with Catholic Charities, Jewish Family and Career Services (JFCS), and Kentucky Refugee Ministries to resettle in Louisville and start small businesses.

Because of civil war in her home country, Jalloh originally migrated to Gambia, working as a housekeeper for a few years until she saved enough to move to New York. While she was living in the Bronx, a Gambian friend suggested she come to Louisville. In 1998, she did.

“I love Louisville!” she said, clapping her hands. “When we first moved here, I couldn’t believe it was so quiet! Everything was much cheaper than New York. There were a lot of jobs and so much opportunity. It’s truly wonderful here.”

Jalloh didn’t originally plan to go into business. When she first arrived, she worked as a housekeeper and waitressed at a Waffle House until a problem with the Immigration and Naturalization Service led to her arrest. Catholic Charities helped her apply for asylum, but until everything was processed she couldn’t work.

At her husband’s suggestion, she began cooking the West African food she loved out of her home and selling meals through word of mouth. When that went well she expanded, boxing meals up and selling car-to-car at the airport taxi stand. After building a following and getting that long-awaited work permit, she was able to open Mashallah in Buechel in 2006.

“I paid everything out of pocket before working with Community Ventures and the Navigate Enterprise Center at Jewish Family. They helped me so much. They gave me my first small loan, which I paid back. Then I was able to get another loan that helped me to grow, and I learned more about how to run a successful business,” she said. “They gave me a chance to work hard and build a business for and with my family. I’m grateful.”

“We want to help refugees to take control of their lives again, often after many years of having their lives outside of their control. Helping them express themselves through their industry serves all of Louisville. It promotes economic development in the city and provides opportunities for new Americans,” said Jarrett Duker, Navigate Enterprise Center’s director.

“While we can’t make people successful, we can give them access to resources to make a go of it themselves. Kadiatu and her family used those resources and built a successful business. It’s really great.”

He laughs. “You know what else is great? Wednesday. Wednesday is the greatest day at Mashallah! You won’t believe how good it is.”

He’s talking about one of Wednesday’s dishes — chop yopah, an iconic Jollof rice dish with lamb and vegetables.

Jalloh lights up when I share this with her. “Yes! Yes! The people love our Jollof rice!”

Mashallah is just one of many global restaurants, groceries, and bakeries on this part of Old Bardstown Road. In addition to West African food, you can find Bosnian, Nepalese, Russian, Jordanian, Indian, Chinese, and others.

“Seeing that kind of stretch of businesses demonstrates that refugees are upwardly mobile. They’re creating new businesses and generating growth by not just catering to the refugee community, but to the entire community,” said Colin Triplett, the director of migration and refugee services at Catholic Charities. “That helps us all experience the wider world and understand the universality of the human experience. Louisville is richer for it.”

Jalloh doesn’t know exactly why so many shops opened in this particular area.

“All the businesses along here — they just kind of happened. The West African community is more over here than anywhere else in the city, and the rents were cheaper. Plus, we have our mosque just down the road. Four actually — the Senegalese, the Bosnian, an Iraqi and another. A lot of people come to the restaurant after Friday prayers, and not just the West African community.”

“We really are lucky in this city. People and employers are very receptive to refugees. The city is also committed, and the neighborhoods folks live in are welcoming,” says Triplett, whose agency will help resettle approximately 700 of the 85,000 refugees granted asylum by the State Department this year. Currently they’re working primarily with clients from Congo, Somalia and Bhutan, as well as with ethnic minorities from Burma.

“In a lot of ways, it’s easier here for refugees than in larger cities. The job market is good, and the cost of living is low. There’s a very good school system that pays attention to these students and a healthcare system with culturally competent providers,” said Triplett. “You aren’t necessarily defined by your past. You can start over and carve out something that’s yours here in Louisville. It’s a very welcoming place.”

“Whether they’re starting a restaurant or are looking to establish a high tech venture, we want all new international arrivals to get their businesses off the ground with as few roadblocks as possible,” says Brian Warren, globalization manager of Louisville Metro’s Office of Globalization, which works to ensure the city is competitive in a globalized world.

Among other things, the office aligns city government efforts with the work of nonprofit organizations serving refugees and immigrants. “That could mean having mentors listen to a business plan and provide input. Or it could mean having a fellow immigrant or retired executive put you in touch with the right people or explain codes, licensing and permits.”

Surveying the store and restaurants, Jalloh says, “We thank God. We’ve worked hard, we still work hard. Now we own a home here, and all our kids are educated.”

One daughter just started nursing school at the University of Louisville, and a son is at Trinity. But her mother is still in Sierra Leone. They’ve not seen each other for 22 years because Jalloh’s current papers don’t allow her to travel outside the country.

“Not seeing my mother is the only frustration we have. Because all these years and still just a work permit, not citizenship.”

With that, and the lunch rush over, she was off to see her immigration lawyer.