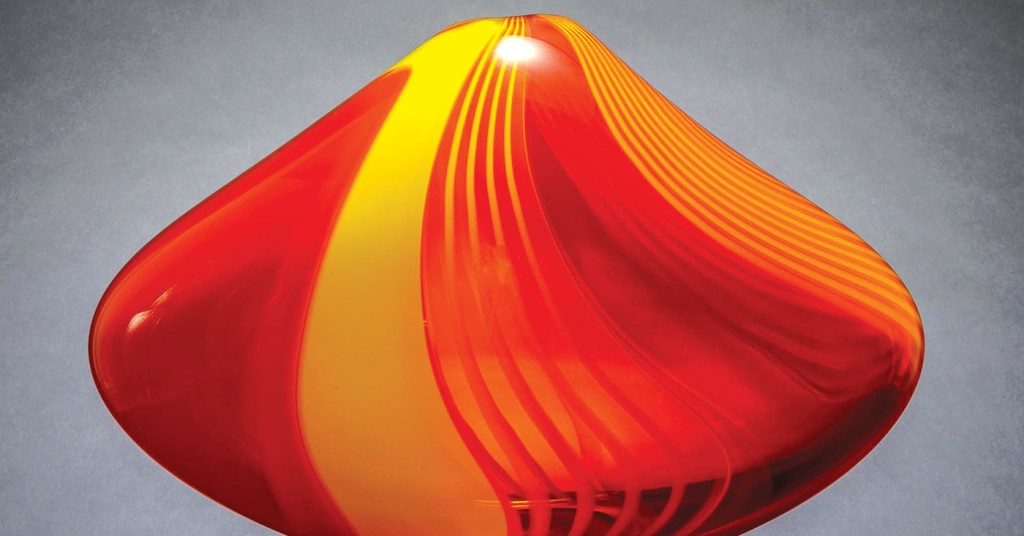 Life in black and white would not be fun. Our relationship to color is one of the things that makes us human. It catches our attention (red, yellow), hides our flaws (black) and soothes our souls (blue, green).

So when glass artist Brook Forrest White Jr. decided to create a new series, he knew going in that the work would have his signature spectrum of bright colors. He has even been told his art looks like a candy store, a pretty good compliment for a colorist.

“Color can evoke emotion even when you don’t think about it,” White says. “I like to think of these pieces conveying some feeling, some emotion, some action, through the color. I think of the vessel as the instrument. And the color is the music you are playing.”

His solo exhibition “Color Theory,” his first since 2008 (what can he say, he’s been busy), is a mini-retrospective as well as a showcase for his new series “En Route.” The works were inspired by his recent travels.

“The past year, year and a half, I got to do a lot of traveling,” states White. “Brazil, Peru, Denmark, Sweden. I love to travel. Traveling is a real journey and a spiritual, inner journey as well.”

The gallery at Flame Run, the glassblowing hot shop studio he founded in 2004, has placed the older pieces along the wall and window to form the retrospective. This is where you can view such works as “Blaring” from his senior show at Centre College in Danville, Kentucky. A past signature of White’s was his use of two different spotted colors for the inside and outside of his vessels, such as what is found in his “Noble” series.

“En Route” has 40 vessels in the series, half of which are on display. It took him over a year to complete the group. They’re large, a hangover from his days working with glass maestro Stephen Rolfe Powell. “Who did I work for? [The size] is part of that Steve mentality,” he says, smiling.

As to be expected from White’s previous work, “En Route” features sophisticated color combinations in flowing swirls and granular designs. Singularly, each oversized vessel is stunning. As a group, the overall effect is of a glowing, colorful room of — yes, I will say it — candy. He seems to be full of creative energy and at the top of his game.

The “En Route’ series will get a grand showing at the Red Dot Art Fair during the first week in December. The fair runs concurrent with Art Basel Miami Beach, one of the most important art shows in the country. What makes this even more exciting is that Red Dot contacted Flame Run to see if they wanted to exhibit this year, not the other way around. White was initially concerned he wouldn’t have enough to show; that doesn’t seem to be a problem now.