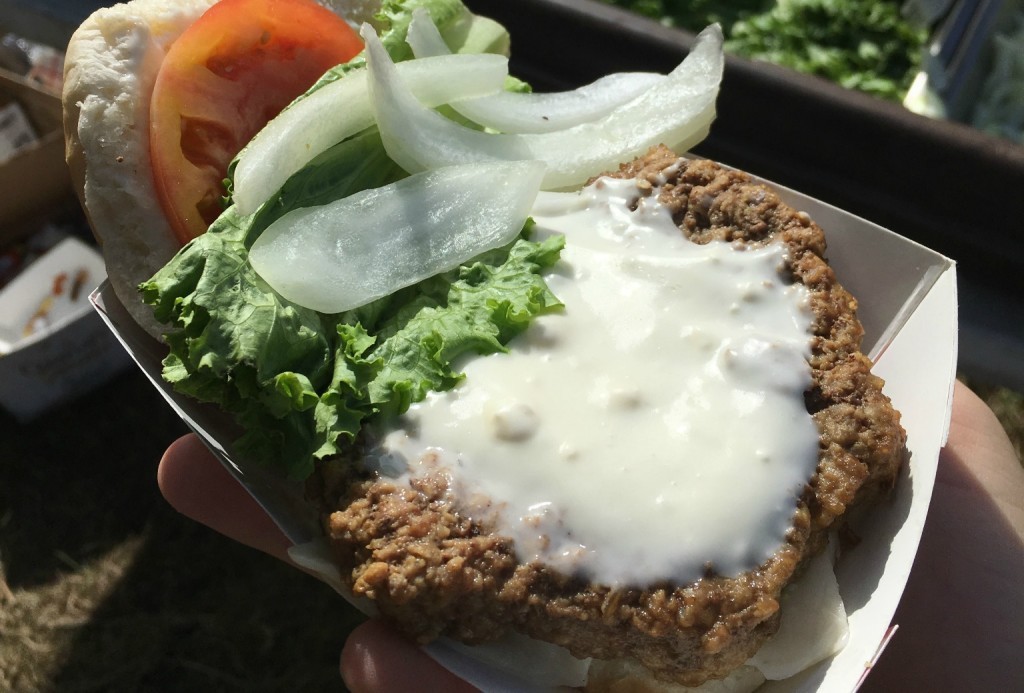 When the inaugural Louder Than Life debuted last year — a celebration of loud music, bourbon, and “Gourmet Man Food” — the focal point of local public discourse very quickly became the latter component. And justly so because that phrase… well, it’s not good.

Can we gender food? Isn’t it highly #problematic to uphold gender norms inherent therein? Do women not eat, like, cheeseburgers? Is the food going to catcall or quote Borat from the plate? Is everything bacon-infused? Will we parse out all the phallic symbols in today’s lunch? Does my sandwich have not only sentience, but also its own account on The Chive? I only took a couple gender studies classes in school, but I could unpack all this ad infinitum.

Like the ill-advised Dr. Pepper 10 campaign, I really shouldn’t need my cis-male identity properly reinforced by whatever abysmal products I consume. Still yet, I was intrigued because I do love street food and food truck culture, and as a beta male pansy who somehow likes a fish-out-of-water adventure and some light rock and roll cultural anthropology, I decided to barge head-first into a testosterone-fueled culinary corral of cholesterol and villainy. At great risk to my GI tract and masculine identity, I put all my chips on the table Sunday afternoon at Louder Than Life.

I did set aside a couple of rules though. First, I had to reject my natural eating habits. Normal me would’ve gravitated toward the wussier spectrum of chicken gyros, kabobs, and healthier white meat options. Maybe some stuff with greens. Not today, Mayor of Friendzone. It’s red meat and grease and real dude shit. Leave the PETA jive at the Monster-branded gate, cry guy.

And so I did, and I lived to foodsplain about it.

Each meal is rated for both deliciousness on a scale of emoji faces because millennials, and manliness using pretty uninteresting, yet widely-recognized masculine identity constructions of American men on the screen and stage. Soup’s on, fellas.

What’s manlier than a big sloppy burger, eh? To my knowledge, nothing, so it made sense to kick off my Gourmet Man Journey with a solid showing of good ol’ fashioned American burgin’. I chose the Black & Bleu because fancy man food writer over here still needs a little semblance of artisanal hackery in my cuisine. Just some cute little crumbles on the top, no need to roll out the red carpet or anything. All beef patty brings the manliness, bleu cheese tops off the gourmet. Seems to keep in the spirit of the mission statement.

Instead, the burger came served with a slice of white cheddar below the patty, and bleu cheese dressing — as in the salad dressing — on top. Buddy, no. Nope. That’s like promising fresh pico de gallo on a taco then unscrewing a jar of Tostitos Mild. Thumbs down. Back to the drawing board, Burger Factory. The patty was appropriately portioned and salted, however, and the fresh toppings bar provided a nice touch. But bleu cheese dressing, Lord have mercy. Like that annoying male friend who enjoys an occasional “that’s what she said” quip, Burger Factory just had to give me the business.

The perks of the VIP Louder than Life package included not only partitioning oneself from the plebeians and festival morlocks, reinforcing class structures within a recreational paradigm… but also upgraded Gourmet Man Food! Giddyup. The VIPGMF included Mike’s Kentucky Kitchen, The Comfy Cow, Chicago’s Dia De Los Tamales (which the common Man also had access to in the main GMF corral) and Chef Edward Lee’s mobile joint Smoke & Pickles!

Writing that the kitchen of Edward Lee would whip up something amazing … not exactly a hot take. It’s like writing an essay about how Led Zeppelin actually kicked ass (though they are also inadvertently responsible for a lot of the music at this festival that misses the mark, but hey, that’s another conversation). So yes, the Lime & Beef dish — a cabbage-based crunchy salad dressed in a tangy ginger vinaigrette, scrumptious mango and topped with peanuts, tomatoes, fresh cilantro, and sesame seeds — was thoughtfully textured, seamlessly balanced, simply fantastic fare. Adventurous, piquant, filling, and all around awesome … but not terribly manly. Sure, the plating came replete with a generous cut of marinated, lightly seared poached beef. But it’s still a salad. Enjoy your rabbit food, precious little man.

Under normal circumstances, I don’t dance with mystery meat. But today I’m drawing from the deepest arsenals of my manhood stockpiles, and I love a good Chicago dog. When I lived in Chicago in the late aughts, I took the city’s signature street food for granted. That the vendor references the CTA in both logo and name, I figured that these folks were Windy City enough to know the significance of State and Madison and to serve up an authentic, legitimate Chicago dog that leaves no room for deviation or chef whimsy.

They almost nailed it. This was a delicious hot dog, certainly a Vienna Beef meat tube, adorned with mustard, chopped onions, sport peppers, tomatoes and a pickle spear nestled in a poppyseed bun, all dashed with celery salt. I know this gets into minutiae, but to skimp on the traditional neon green for generic sweet relish and to chop the tomatoes rather than stagger thick slices across the bun length is most unfortunate. Tertiary, yes, and of course none of that greatly affects the flavor profile in the end, but it does take a little something away from its experiential quality. Like a true reuben, the process is exact. Despite those slight misgivings though, I’d undoubtedly dog up here again. Extra points for a local joint bringing this iconic staple to Louisville.

Speaking of Chicago, the aforementioned Dia De Los Tamales provided the day’s fourthmeal, specializing in tamales and nachos. If you can’t decide between tamales and nachos, or you want both, you can save a buck and get the “Nachomale.” And wouldn’t you know, it’s a messy heap of nachos with a tamale on top. Because I wanted to dig into something a little more amorphous in presentation, and it had “male” in the name (because Man Food), I had to move forward with the Nachomale.

Per the cashiers recommendation, I chose the Cuban pork tamale to plant its flag high above a bed of yellow corn chips, bolstering a mound of toppings. The black beans offered a lightly spiced, zesty flavor but the chips were bland and pickled jalapeños are generally a snooze compared to its fresh counterpart. As well, gelatinous yellow nacho cheesefood belongs only at the roller rink or carnival, not in a $14 artisanal version of street food. As well, the tamale’s filling-to-masa ratio concentrated the otherwise succulent pork all to the center, making for uneven bites. Disappointing execution, but hey, I got to eat a sloppy plate of nachos with a tamale on top, and that’s manly as fuck.

My body, which is my temple, experienced a brutal rush of caloric intake throughout the afternoon that catalyzed a period of self-loathing so trenchant, it could span another column. As someone generally thoughtful about portion sizes and clean eating and not being a nasty human being, I started to feel outright awful, especially after the Nachodude. But in the name of journalism, I had to polish the Gourmet Man Journey off with dessert. Despite it all, I’m glad I did.

Hi Five serves up made-to-order donuts with an array of glazes and toppings from a white truck under a giant Simpsons-evocative donut. I chose the donut holes with stout beer glaze and pretzels. Slightly chewy, saturated with a buttery and sweet aroma, and generously drizzled in the complex, scrumptious and I guess decidedly “manly” beer glaze, Hi Five’s modular donut model is a totally unique food truck experience — be it for a meal or desert.

And with that, the Gourmet Man Food crown belongs to the Ladies of the Morning.

I did not listen to any of the bands.