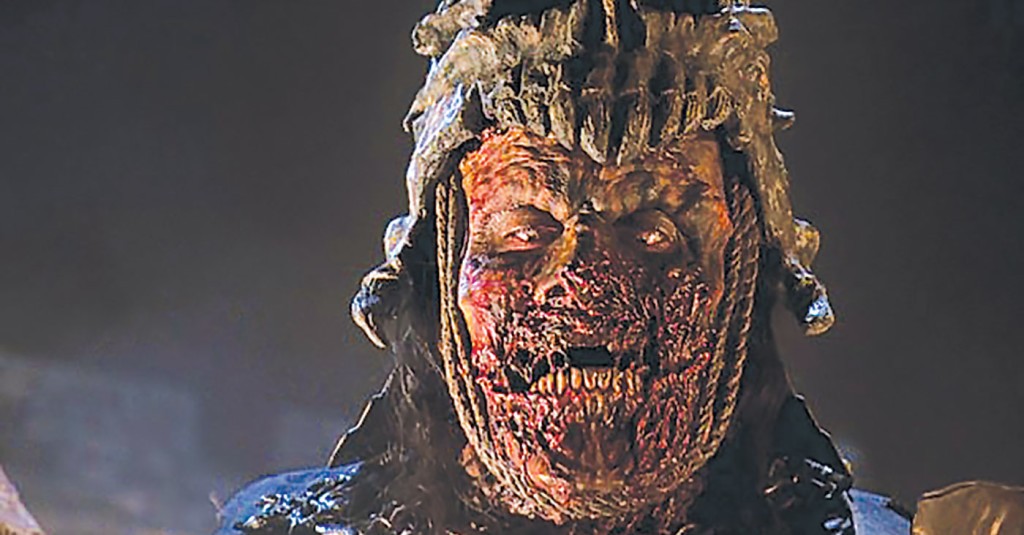 ARMY OF DARKNESS
1992; $29.94; R
Surely by now everyone knows about AOD: Bruce Campbell and Sam Raimi’s penultimate comic-horror sequel to the “Evil Dead” films, in which Bruce finds himself trapped in the Middle Ages, a chainsaw filling in for his missing hand, and the Army Of The Dead marching his way. What could possibly be better? How about a three-disc Blu-Ray set that contains not just the original theatrical version and the 15-minute longer director’s cut and an international version with a bonus TV cut as well! Plus, each disc contains a different and exciting set of bonus goodies! Big dumb fun at its very finest.

THE SAND
2015; $17.98-24.98; UR
Jamie Kennedy, who also popped up recently in “Tremors 5: Bloodlines,” does a cameo here as beach patrolman Alex, completely useless when some sort of tentacled CGI whatsit starts dragging nubile bikini-frollickers into the sand in the most horrific fashion imaginable. And while there’s no Oscar in its future, you’ll love the great balance of shocks and humor, plus the surprise of genre-busting beach babes who must take charge of the situation before the brain-dead jocks get them all killed. As holy guardians of the blessed video realm, we hereby declare smokin’ Brooke Butler from “All Cheerleaders Die” to be the official Meryl Streep of bikini monster flicks. Don’t miss this.

A REUNION
2014; $24.98; UR
What a surprise this was! Two former friends, adult men long estranged, meet up for an Los Angeles-to-Chicago 10-year college reunion road trip — and there’s not a fart joke or drunken cop-chase to be found. Just two guys talking about who they were, who they are now, America in all its glory; life, love, longing and why the world is the way it is with great affection, humor, insight and … wistful romance! A minor hit at college LGBT+ film festivals, this marks writer/director Hernando “F*cked By An Angel” Bansuelo’s first full-length film. We can’t wait to see what he does next.

BLACK BULLET: COMPLETE COLLECTION
2014; $39.98; UR
Beautiful, spunky little Enju is a Cursed Child: a girl born — and surviving unmutated — with an alien virus/parasite called the Gastrea within. And while the horrific infection has decimated and corrupted Earth’s population, her immunity gives her superhuman abilities that the government exploits to fight the invaders. Partnered with an older boy, Rentaro, they are on a mission to prevent the destruction of Tokyo, and possibly mankind itself. A desperate, original, no-holds barred action-packed series with some of the best artwork we’ve ever seen in an anime — yet surprisingly funny, warm, cheeky and winning, with no lack of fan-service. We loved it!

MISS FISHER’S MURDER MYSTERIES: SERIES 3
2015; $34.98-49.98; UR
More from this none-too-serious yet remarkably entertaining series from Australia, with Essie “The Babadook” Davis as Miss Phryne Fisher, a shapely private investigator who rules the streets of 1920’s Melbourne with a pearl-handled pistol in her purse and a tongue sharp enough to cut a man off at the knees. Her love life is the next victim when her estranged con-man daddy arrives unexpectedly — just as a magician’s act gets literally cut short by the on-stage guillotine! Inventive and sexy crime/mystery tales that harken back to heady days of flappers and ragtime, peppered with style, grace and a bit of titillation. Wonderful stuff.

PIXELS
2015; $26.98; PG-13
A high-concept bit of nonsense from the usually reliable director Chris Columbus (the early “Harry Potter” movies) that didn’t exactly burn up the box office, but it’s still a minor hoot for those who grew up on 8-bit vidgames like “Centipede” and “PacMan.” An alien race believes these arcade oldies are a declaration of war, so they supersize all the crudely-animated avatars and throw them right back at us, leading to lots of city-wrecking comic carnage. Our only hope lies in an army of overpaid actors — Adam Sandler, “President” Kevin James, Michelle Monaghan, Peter Dinklage, Josh Gad, Sean Bean, Dan Aykroyd, et cetera — who mainly just scream and run for cover. Big dumb fun.

SOUTHPAW
2015; $24.98; R
If you doubt that Jake Gyllenhaal is not the greatest actor of our age, check out this formulaic boxing drama that he turns into a powerhouse drama through shear physicality. He is Billy Hope, world lightweight boxing champ: a man with money, fame, a gorgeous wife (Rachel McAdams) and a perfect daughter — all of which he loses in a moment of weakness, leading to some of the most horrific scenes of despair we ever sat through. But from rock bottom he claws his way back to the top, culminating in a last-ditch do-or-die match that out-Rockys “Rocky” on every level, soaring over the cliché’d confines of “sport movie” to become something unique and universal. Perfect filmmaking.

A LITTLE CHRISTMAS BUSINESS
2013; $15.98; UR
As regular readers know (support groups standing by) we’re not big fans of these treacly Dove Approved films that present Christian values as a form of Enlightenment, but this one’s message about over-dedicating yourself to your job to the point of alienating your family is worth the sugar. Also, it stars Daniel Baldwin, who’s always fun to watch, here married to “The Young And the Restless” hottie Tammy Barr, with cameos by Lorenzo Lamas, Bo Hopkins, and Leslie “Police Academy” Easterbrook.

AGATHA CHRISTIE’S MISS MARPLE: THE JULIA MCKENZIE COLLECTION
$61.99; UR
We’ve been pimping this BBC series now for better part of a decade, and for good reason: It’s one of the very best things ever put on the tube anywhere on the planet. So what makes these particular three seasons so special that they earn their own DVD collection? They all feature Julia McKenzie (recent of “The Casual Vacancy”) as Christie’s smart, sharp-eyed spinster sleuth, shuffling after clues in all her tweed-bedecked, umbrella-carrying glory. And while many women have played the character – most notably Geraldine McEwan and Joan Hickson – we always thought that McKenzie was the best. See what you think.

BACK TO THE FUTURE 30TH ANNIVERSARY TRILOGY
$32.98; PG
Universal Studios is pulling out all the stops to celebrate the 30th Anniversary of this perfect 80’s franchise, including this 4-Blu-Ray/Digital HD set with all three movies PLUS over two-freakin’ HOURs of bonus goodies! There’s also a Limited Edition “Complete Adventures” set with all the above AND the Complete Animated Series: a total of 8 discs for $90-$100. Still some of the most entertaining movies in history, they made stars of Michael J. Fox, Christopher Lloyd, Lea Thompson, and Crispin Glover – and extended the life of the DeLorean Motors brand by several decades! An absolute must-own.

BLADE & SOUL: COMPLETE COLLECTION
2014; $34.98; UR
The character-design alone is worth the price of admission to this fem-empowerment anime series heavy on honor, commitment and demonic swordplay. That’s all to be expected, of course, given the series’ origins in a massively-multiplayer online role-playing game from Korea. The complex plots and relationships all center around Alka, a curvaceous assassin who has spent her entire life hunting those who serve the demonic powers of the Param Empire, particularly Jin Varrel, the otherworldly battle leader who murdered her entire clan. With scores of his inhuman bounty hunters on her trail, the action never stops. Truly inspired at every level.

LÉON THE PROFESSIONAL
1994; $31.99; R
A Cinema Series release (4K Blu-ray with all the goodies) of Luc “The Fifth Element” Besson’s very first American film, which introduced us to Jean Reno (“Godzilla”) and … Natalie “Star Wars” Portman! Gary Oldman co-stars as a psychopathic cop on the trail of expert hitman Reno and his young tag-along, Portman, who is extraordinary as the 12-year old who bonds with Reno and learns his trade in order to revenge herself upon Oldman for killing her family in New York City. One of our all-time favorite movies, done up right.

THE FIFTH ELEMENT
1997; $27.98; PG-13
Abso-freakin’-lutely great! Bruce Willis is a tough cabbie of the future who accidentally snatches Milla Jovovich from certain death. She’s the key to preventing Evil (Gary Oldman) from taking over the universe and he’s just crazy enough to help her. Terrific, stylish, stunning, sexy and original. It’s hard to believe that a PG-13 film can be this good! Now available in a 4K “Cinema Series” Limited Edition Blu-Ray UltraViolet set with enhanced sound. Worth every penny.

THE HORROR NETWORK
2013; $19.98; UR
Volume 1 in a predicted series of horror anthologies that harken back to the ‘90s in style and content. And what a cast! A veritible Who’s Who of shrieker eye candy, many of them known only to truly dedicated fright-shmucks like us, including Macarena “Dagon” Gómez, and Javier “[REC]” Botet. Each segment is wonderfully atmospheric in its own unique way, with better writing that we’ve come to expect from this genre. The cinematography is outstanding, as is the sound, particularly on “The Quiet”, about a yound deaf girl walking home from school. Wildly ambitious at times, as in the final chapter which is done in stark B&W with no absolutely no dialogue. Worth your time.

A more complete listing and free vids at  VideoTapeworm.com