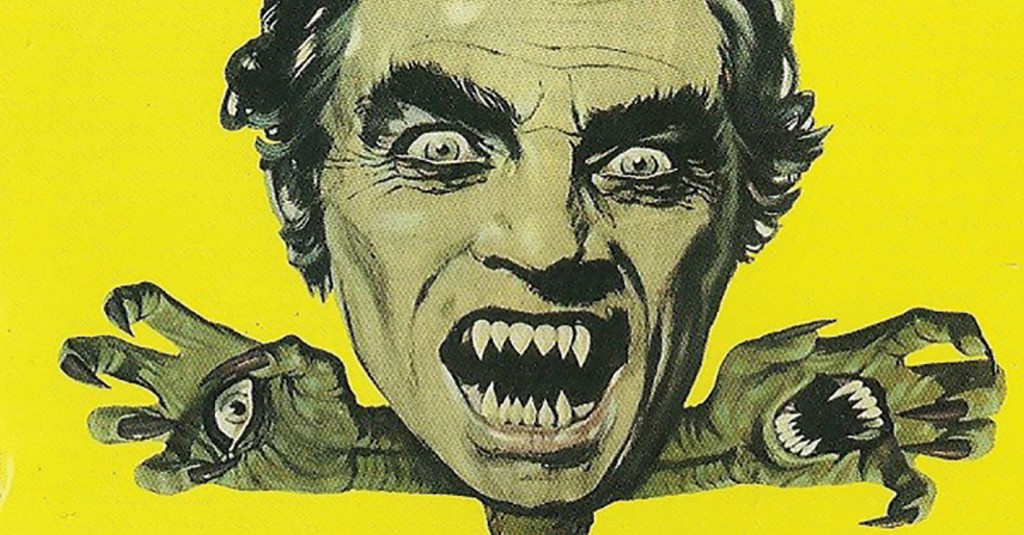 The return of count yorga

BRAM STOKERS DRACULA
1992; $17.98-38.98; R
Better known in some circles as “Francis Ford Coppola’s Dracula”, this is a far cry from the Lugosi standard, with Gary Oldman as The Count, Winona Ryder as his love interest(s), Anthony Hopkins as Van Helsing, and Keanu Reeves as Jonathan Harker. But the real star, of course, is Coppola’s wonderfully over-the-top visual style — including the vampire’s famous fully-independent shadow — coupled with a plot that begins with the creation of the monster in losing his beloved Elisabeta, then basically telling God to go fuck himself. This new 4K Blu-Ray release is available in both a standard and new “Supreme Cinema Series” packaging which includes a neat intro by Coppola and a collector’s book. Worth the money.

THE RETURN OF COUNT YORGA
1971; $26.98; R
The great Robert Quarry, who appeared in over 80 movies and TV shows — most of them cheezy wonders such as “Agent for H.A.R.M.” (a favorite) and “Buck Rogers in the 25th Century” — returns as the titular Count in this sequel that packed ‘em in at early 70’s drive-ins. Dapper, erudite and ruthlessly deadly, Yorga hunts amid the alleyways of SoCal — after being resurrected by … Santa Ana winds! — until he falls in love with Mariette Hartley (“Law & Order: SVU”). Watch for familiar 80’s faces Roger “Falcon Crest” Perry, veteran actor George Macready as the requisite Professor, and the screen debut of Craig T. “Coach” Nelson as a police officer. Now on Blu-Ray.

BALLET BOYS
2014; $24.98; UR
A Norwegian doc following three friends (Lukas Bjørneboe Brændsrød, Syvert Lorenz Garcia, and Torgeir Lund; names we include solely to drive our copy-editors crazy) as they enter training to become professional ballet artists. While only 14-15 years old, they already have a clear understanding of who they are and what they want to do with their lives, though no one could be truly prepared for the grueling work, intense pain, and daily heartbreak required to succeed in this field. Veteran filmmaker Kenneth Elvebakk has created an incredibly intimate minor masterpiece on human desire and dedication. Inspiring and humbling to watch.

DOPE
2015; $24.98; R
This inner-city Los Angeles rap-infused com-drama, which came ouf of the Sundance Film Festival with a legions of fans, is “Superbad” for a new generation. Geeky, college-bound Shameik Moore (“House of Payne”) yearns to raise his social standing — to be “dope” — by way of a dangerous underground party, but he gets in way over his head while shmoozing some shady drug dealers, losing the backpack that contains all his Harvard hopes and dreams. A perfectly crafted mix of old-school rap, on-the-run comedy, screwball friends, drug humor, gratuitous nudity by a Victoria’s Secret model (thank you, thank you, thank you, Chanel Iman!), hip-hop cameos, and more. Trust us, you’ll love this.

PS DANCE!
2015; $19.98; UR
TV journalist Paula Zahn takes us inside the halls of New York City public schools (the “PS” of the title) to illustrate the transformative power of Art on young minds. There she meets a series of children, many of them struggling with poverty, parental indifference, and simple hopelessness, who have become motivated and excited about life, largely by having dance made a part of their curriculum. As each learns to break free of common adolescent insecurities, they literally blossom before the viewer’s eye, becoming ever more confident and self-aware. Best yet, the effect seems contagious, spreading throughout the school and the community, helping reduce crime, drug use and vandalism. A true joy.

THE SAINT: SEASONS ONE & TWO
1962; $37.99; UR
A very welcome re-release of the all-but-lost first b&w episodes of Roger Moore’s breakthrough “mysterious Good Samaritan” TV series from 1962, beginning with “The Talented Husband” in which he visits an old friend, Brit mega-star Patricia Roc, recently crippled in an accident. There he meets insurance investigator Shirley Eaton (“Goldfinger”s delicious “Jill Masterson”), who finds it suspicious that Pat’s new hubby lost his two previous wives in similar “accidents.” Ten suave, debonair, sexy discs-worth of erudite adventure and charm, now fully restored after decades of erosion to make room for ever more egregious detergent commercials. What a treat.

TOMORROWLAND
2015; $24.98; PG
Multiple Oscar-winner Brad Bird (who breathed life into “The Simpson” throughout the ‘90s) wrote and directed this long-overdue big-budget sci-fi/fantasy adventure for Disney. George Clooney gets completely upstaged by lovely Britt “Under the Dome” Robertson as they escape into a mystical, magical land of danger and intrigue that bears a sneeking resemblance to a certain theme-park. A lot of haters have blasted this film as being “inspired by Ayn Rand” and improperly rated (“PG” despite three cops getting killed), but it succeeds in what it set out to do despite Disney’s notoriously control-freaky management. We liked it.

*** More Recommended Videos for our On-Line Readers, Only!
BEYOND THE BOUNDARY
2013; $49.98; UR
One of the best things about anime is its ability to tell those stories which simply cannot be told. Case in point: This dark fantasy about two unique HS students: one is secretly only half-human, a boy with the ability to recover from the most horrendous of wounds; the other is a very troubled girl who attempts suicide after being rejected by society because of her power to forge her blood into lethal weapons. The artwork – particularly the use of stark, directed lighting – carries the very likeable characters though an arc that starts off lighthearted (despite the suicide attempt), but grows ever darker as the two sides in an ongoing war are revealed. Very nice; also available in a Blu-Ray Collector’s Edition with all the trimmings for about $160.

JESS & JAMES
2015; $24.98; UR
An upbeat Karouac-inspired road trip across Argentina by a pair of young Gay men who find the world ever more exciting, their newly-discovered sexuality binding them more tightly together with each passing day. A live-in-the-moment explosion of youth and sex meant to remind us all of how it feels to be young, alive and free. Or, as a certain poet once put it, “the only people for me are the mad ones, the ones who are mad to live, mad to talk, mad to be saved, desirous of everything at the same time, the ones who never yawn or say a commonplace thing, but burn, burn, burn like fabulous yellow roman candles exploding like spiders across the stars.” (First rule of a hack writer: Only steal from the best.)

PENNY DREADFUL: SEASON 2
2015; $32.98-49.98; UR
Frankly, after the roller-coaster ride of Season 1 we were ready to sign off on “Penny Dreadful” – not because it wasn’t bloody extraordinary, but because we thought “there’s no way their gonna top that!” And the lackluster first episode of Season 2 did nothing to dispel that belief. But we stayed with it and by Ep. 3 we were hooked evermore, cursed to wallow in this joyously corrupt and relentless Elizabethan horror until our blood turns to dust. Eva Green, as oddly sexy and frightening as ever, leads a fabulous cast including Timothy Dalton, Billie Piper, and Josh Hartnett, with Reeve Carney — the original Broadway Spider-Man … really! — as a bi-sexy Dorian Gray, Harry “Cockneys vs Zombies” Treadaway as H. Frankenstein, and BBC stalwart Rory Kinnear as his monster. Will literally take your breath away.

SKIN TRAFFIK
2015; $19.98; R
Aka, “A Hitman in London”, this low-rent cameo-movie won’t win any Oscars, but with a cast of Mickey Rourke, Dominique Swain, Daryl Hannah, Michael Madsen and Jeff Fahey, how bad can it be? Uh, it’s probably best we don’t answer that question and focus instead on action-meister Gary “Gary Daniels” Daniels (the movie’s real star) who pulls out all the stops as a former hitman suffering a crisis of conscience. After many bad deeds he finally goes postal on a cabal of human traffikers and the rich bastards who enable them.

THE GLEN CAMPBELL GOODTIME HOUR: CHRISTMAS SPECIALS
2015; $16.98; UR
For those of you who never heard of The Wrecking Crew or Johnny “Gentle On My Mind” Hartford: The Glen Campbell GoodTime Hour was a truly unique, seriously corny, gosh-a-mighty entertaining little musical-variety TV show from 1969 to 1972. And its best episodes were these Christmas Specials, which featured a Who’s Who of musical performers, many of whom owed their fortunes to Campbell and the TWC, the musicians who secretly wrote, produced and sometimes even performed over 100 of the late-60’s biggest hits. A minor gem.