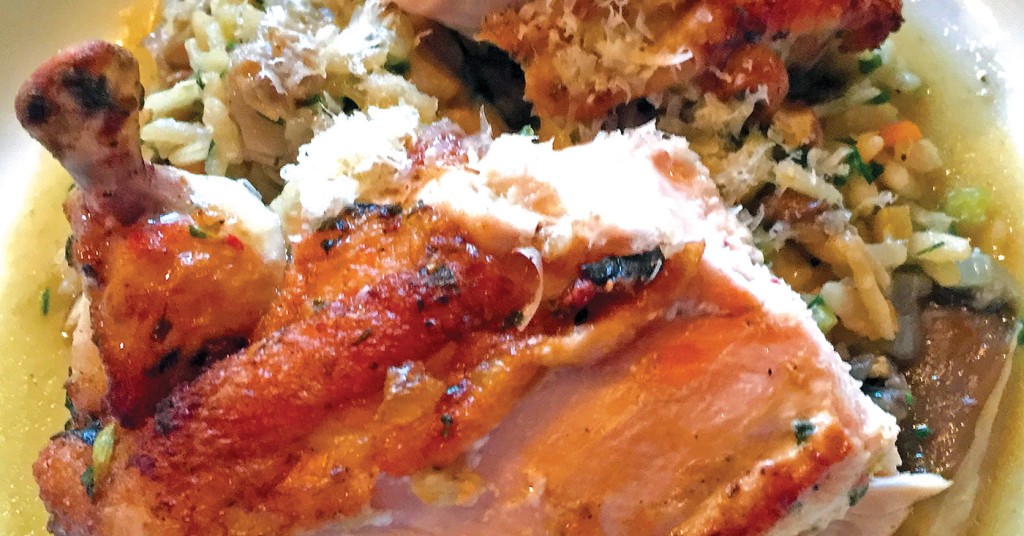 Your heart wants to go back and indulge in the comfortable places that you love. Your brain — and your urge to begrudge extra calorie intake — pulls you the other way. So, assuming that a new review won’t add much to the wisdom imparted by your last review, you head off in pursuit of the next big thing; and everything stays the same. Until it doesn’t.

Take 211 Clover Lane, for instance. I love this little place! A local landmark since 1992, it’s an understated, elegant whiff of Provence, located in sylvan surroundings just off the pulsing core of St. Matthews’ booming eat-drink-and-party zone. I’ll drop in for a delicious brunch on occasion, just for fun, without a thought of a review.

The other day I ran across my last review in the archives: Nov. 14, 2007! OK, that’s a little too long. So what could be finer than a return visit and an updated review, which you’re reading just short of eight years later.

So, what’s changed? On one hand, not that much. Everything I said above still applies: Pretty, understated, elegant, located in sylvan surroundings that belie its proximity to the railroad, major traffic arteries and the bright lights of Trinity High School’s sprawling campus.

On the other hand, a few little things have changed: a new chef, for instance, and a subtle redo that kept the mood of understated elegance but transformed the bar, in particular, from a cozy little hangout to a beautiful, larger club-like space.

Heintzman’s menu remains consistent with 211’s style — a creative mix of Continental and American influences. Focusing on fresh and local ingredients, it changes up frequently to follow the market.

For our recent visit with friends Don and Pat, there were eight starters (or small plates) that ranged in price from $10 (for a fried “kalette” and pancetta salad or grilled corn, tomato and arugula salad) to $15 (for a brace of Cape Breton Bras d’Or oysters on the half shell). Only a pedant would note that “bras d’or” (“golden arm”) was rendered Brass d’Or on the menu, a truly forgivable lapse.

Nine main courses, not counting daily specials, are $23 (for a wild-mushroom pasta) to $41 (for grilled filet mignon). This is not cheap eats, with most mains in the upper $20s and $30s, but it is good eats. Heintzman clearly doesn’t go for flash or culinary shock and awe but wins with good, honest food, prepared well and served with simple style. The menu also refrains from naming its providers, perhaps intended to avoid pretentiousness, but in the era of the farmers market and locavore love, a lot of us like to know which of our farmer friends provided the bounty.

Warm, sliced house-made baguettes with herbal olive oil for dipping started us off.  Then, Mary sang the praises of the 211 house salad ($7), declaring it one of the most delicious ever: carefully curated mixed and locally grown greens dressed lightly with a tangy, delicious vinaigrette and topped with what the understated menu called “Parmesan” slices — surely Parmigiano-Reggiano or at least Grana Padano.

Best ever? So she says. But I liked my salad even better: fresh tomatoes and grilled corn cut off the cob, with tomatoes over gently bitter arugula leaves in a luscious tarragon vinaigrette tossed with crisp croutons that I’m pretty sure were made in-house, not poured out of a bag ($10).

Main courses were all met with delight. The only meat-free main is linguine with wild mushrooms and parmesan cream ($23). Al dente pasta with a mix of dark and light mushrooms and cheesy creaminess, it was vegetarian but clearly not vegan.

The roast half-chicken hit the spot, too. Two smallish but intensely flavored quarters were roasted until dark and delicious under a spice rub; truffle oil and herbs added grace notes to the flavor symphony. A dab of mushroom risotto alongside was one of the evening’s few lapses from perfection: not a true, creamy risotto but al dente rice with a mushroom sauce.

A shared ramekin of chocolate pot de creme with a dab of whipped cream ($7) tasted exactly like my mother used to make. That is a very good thing.

Our share of dinner for two, including a couple of cocktails that added about $20 to the toll, came to a high-end-but-worth-it $96.73, plus a $20 tip for flawless service from our server, Sarah.