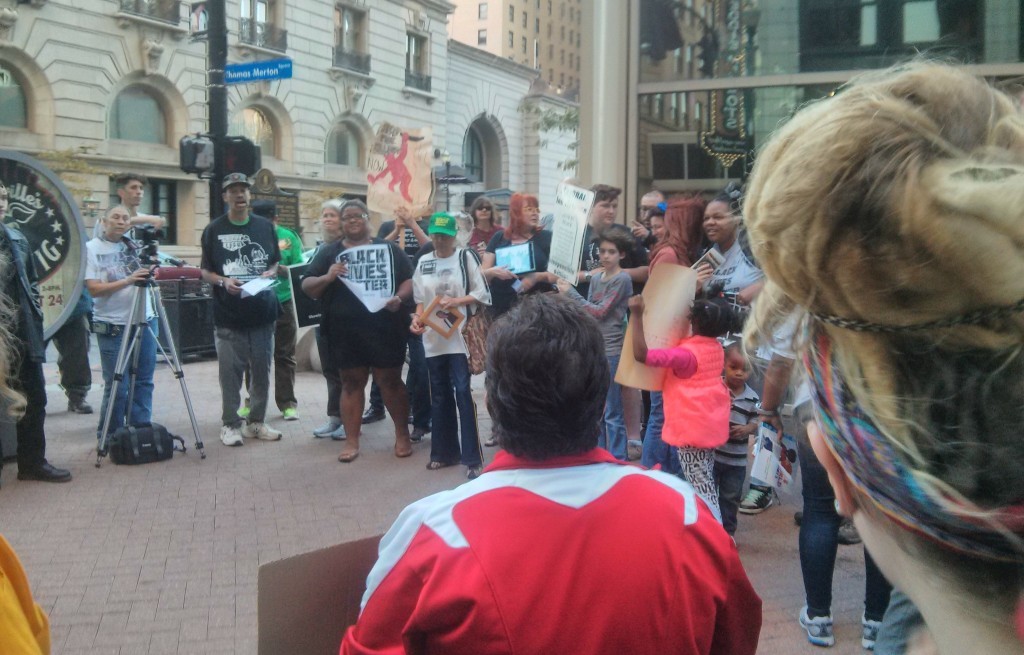 As part of National Anti Police Brutality Day (Oct. 22) over 50 local activists from groups like Showing Up for Racial Justice, Stand Up Sunday and the Fairness Campaign gathered at the corner of 4th Street and Muhammad Ali Boulevard to call for “accountability and an end to police brutality,” as well as a “break in the white silence.”

The protest covered a range of racially charged topics and incidents, but seemed to have a very specific target.

“We chose this location because Fourth Street Live! has a history of racial profiling and racial discrimination that we feel has not been fully addressed yet,” said Sonja de Vries, organizer for Louisville’s Showing up for Racial Justice. “I mean they’re practically notorious for it now. And that does not represent our city.”

The site was also chosen because of its connection to civil rights activist Thomas Merton. The intersection where the protest was held is known as “Merton’s Corner” because of a revelation Merton had there, which led to a famous quotation by him in “Conjectures of a Guilty Bystander”: “At the corner of Fourth and Walnut […] I was suddenly overwhelmed with the realization that I loved all these people, that they were mine and I theirs, that we could not be alien to one another even though we were total strangers.”

The peaceful protest hoped to embody the spirit of Merton’s quote by “bringing the arts into the streets” in the form of a “cento,” a collective poetry reading where members read aloud quotes and passages focused on a specific issue, in this instance, police brutality, racism, white supremacy and privilege. Quotations read included:

Some of the readings were drowned out by a very loud soundcheck by Fourth Street Live! which many protestors believed was not coincidental. And during a moment of silence for those killed by police brutality, the protest was again interrupted by a white male in a business suit shouting, “You all are idiots!” But the group of both white and black activists seemed undeterred as they ended the protest by lifting their fists into the air and chanting: “No justice, no peace! No racist, police!” “Whose streets? Our streets!” and “It’s our duty to fight for our freedom! It is our duty to win! We have nothing to lose, but our chains!”