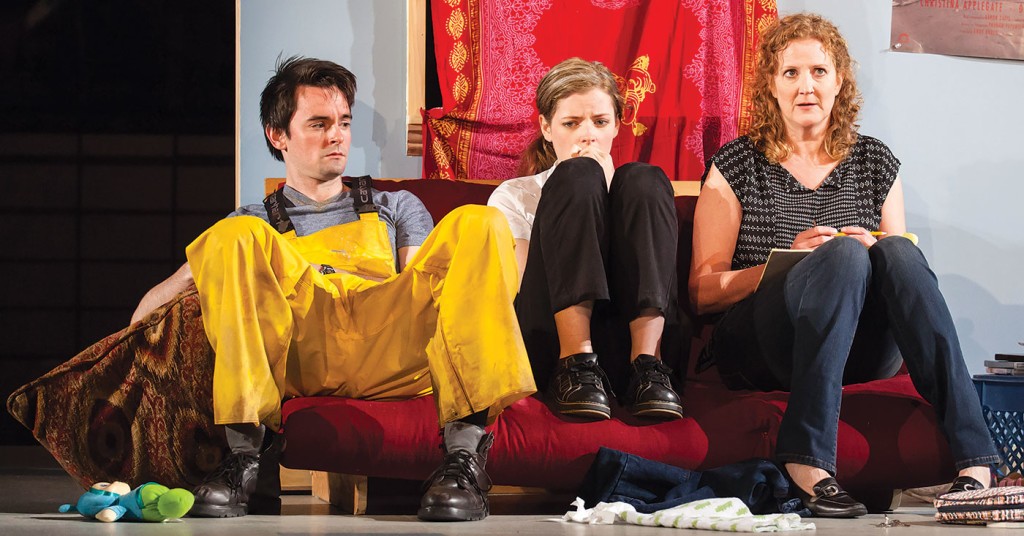 Workplace trauma. Vicarious traumatic stress. Harassment. Violence. Enormous case loads. Inadequate budgets. Low pay. Take a look at the peer-reviewed scholarly literature around the challenges facing child welfare social workers, and you may wonder why anyone would take on the job of advocating for helpless children and trying to shield them from abuse and neglect.

Some of the literature around this profession likens its stresses to those that face police, firefighters and other first responders. Except when controversial cases arise — and those often involve a tragedy — many of us seldom get a deep look into the workings of this profession.

Rebecca Gilman’s 2014 play, “Luna Gale,” which opens this week at Actors Theatre of Louisville (ATL) in production directed by Les Waters, delves deeply into the subject in what a New York Times reviewer described as “taut drama” that offers “an engrossing exploration of the tough choices [social workers] contend with daily.”

At the center of the play is a social worker, Caroline, who decides that the only way to ensure the safety of the infant Luna Gale is to remove her from her parents’ home.

In a telephone interview, I asked Stetson whether a play like “Luna Gale” that deals with contemporary social issues posed any special problems for an actor.

“As an actor, I don’t tend to think of plays that way,” she said. “I’m quite myopic when I approach a play. I look at my character and relationships, and what my character wants. In this play, Caroline is a social worker in a play that does deal with the social welfare system, but I’m focused on the external pressures that face my character, and how those pressures affect the way I interact with the people around me in the world of the play. It’s only when I step outside the play and have conversations like this, or with audience members, that I really think about what the play’s about in a broader sense. But at this point, just a few days before opening, I’m really just focused on my character’s behavior.”

Preparing for the part of Christine, said Stetson, required coming to understand specific behaviors. “There were things I wanted to know: What happens when a phone call is made to a social worker and a social worker hears, ‘We have a baby who we think may be in a situation of neglect.’ What are the steps? What’s the first thing I do, the second thing, the third, and fourth thing. How do I walk into a room to assess the situation? If I’m walking into a grandmother’s home to decide whether she’ll be a great caretaker, what am I looking for? What do I do if I’m disappointed in some way? As an actor I try to look for these very specific things in every play, because what I’m interested in is behavior. What am I going to do? How am I going to look at the people who are standing across from me? How am I going to interact with them?

“In a lot of plays, this is an exercise of imagination,” Stetson continued. “You’re making it up based on your understanding of the character. But in this case, we were really fortunate. Our dramaturgy team had assembled a tremendous amount of information for us — professional manuals, policies and procedures that are in use in Iowa, where the play is set, and plenty of information written for lay people.”

In addition, the cast had the opportunity to meet with social work professionals, including Michael Gosser, Clinical Manager of Adolescent Services at The Morton Center and Christie Atkinson, with the Cabinet for Health and Family Services.

“It was a huge help,” said Stetson. “We asked very specific questions about situations in the play, and were able to get detailed information about what we’d have been doing in our offstage life between scenes — ‘you would have called the judge; you would have gone to this hearing and that hearing.’ As an actor it’s so helpful to know that I’m a person who does these things, that I walk into a court, stand in front of a judge, and act as an advocate.”

And, said Stetson, in coming to grips with her character, she also developed a deeper understanding and appreciation of social workers. “I’ve really come to appreciate how courageous social workers are, and developed a respect for the confidence you have to have to in order to make these decisions that affect people’s lives. I’ve come to think of them as very similar to surgeons in many ways. The kind of confidence it takes to perform surgery I think is not dissimilar to the kind of confidence it takes to walk into somebody’s home and say, ‘We think the best thing for your family right now is to remove your child.’ The difference, of course, is that we don’t deify social workers in the same way we deify surgeons.”