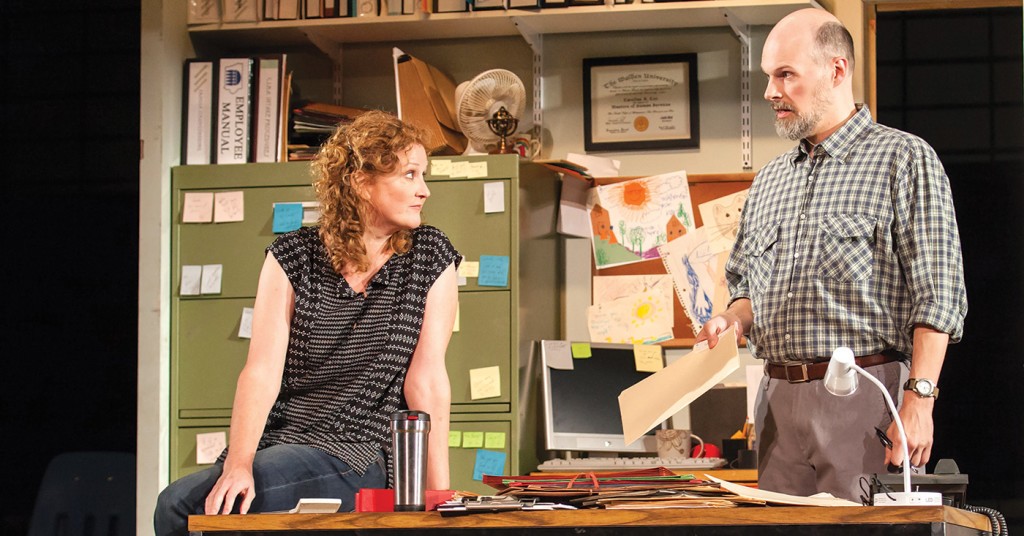 In its simplest, driest form, a plot synopsis sounds like something pulled from, say, a news story, a courtroom docket, a made-for-TV movie — or maybe just a conversation among acquaintances of the folks involved: A social worker determines that the drug-addled parents of infant Luna Gale are not providing a safe environment for the child. She places the child in the temporary custody of a grandparent. The grandparent seeks permanent custody and attempts to permanently terminate the parents’ custodial rights. A battle ensues on three fronts, familial, bureaucratic and judicial.

Topical though it is, this is no made-for-TV movie — Gilman’s script is filled with subtle (and not-so-subtle) wit and streams of eloquence. And though the frame of the story is simple enough, Gilman fills the story with so many twists and turns that at times “Luna Gale” feels like the darkly dramatic equivalent of a Blake Edwards comedy — one of those elaborately plotted funhouse scripts even the most implausible surprise deepens our pleasure in the tale.

The opening moments of this play are grim. In a stark, institutional hospital waiting room (Scenic Designer Andrew Boyce), a young woman with a pockmarked face seems ready to explode out of her skin in a drug-induced palsy. This is Karlie (Lexi Lapp), mother of the infant Luna Gale. Her boyfriend, Peter (David McElwee) is in a nearly comatose state. Certainly Karlie can’t rouse him — even when she shoves a piece of candy into his mouth because, as she says in an weirdly caring way, “You need to eat.”

The couple has been waiting for hours in an “expediting” room where no expediting is taking place — until a child welfare social worker, Caroline (Wendy Rich Stetson), appears, quizzes them about the baby’s medical history and quickly determines that the couple have recently started smoking meth. Recently, she notes, because they both still have their teeth. But there’s no way these two are taking the baby home.

Next we find Caroline in the home of Karlie’s mother, Cindy (Rebecca Hart), where she’s assessing whether “kinship care” will be a safe placement for the infant. As shaped by Director Les Waters (and contextualized by the fine work of Costume Designer Kristopher Castle; Lighting Designer Matt Frey; Sound Designer and Composer Bray Poor), these opening moments are stern, humorless set pieces that illustrate Caroline’s chilly bureaucratic authority, Karlie’s addled, chaotic energy (and intelligence), and the embarrassment, anger and shame Cindy feels as she tries to earn the right to take Luna Gale into her household.

Then, when Caroline declares Cindy’s home suitable, there’s an abrupt shift of mood: Cindy raises her hands to thank the Lord, and Caroline, unable to conceal a smirk, reveals that every time she hears someone describe Jesus as a “personal savior” she hears “personal trainer.” And that little exchange plunges us into a tale filled with ethical dilemmas, bureaucratic and religious hypocrisies, bitter family passions and clashing, irreconcilable interests.

In the world of the play, we see people engaging in behaviors that seem laughably implausible — until we realize that they’ve certainly happened in the real world. And though Gilman sometimes resorts to writerly manipulations that ought, strictly, to have been better concealed, Waters and his cast (with assistance from social services professionals Christie Atkinson and Michael Gosser) do a fantastic job of bringing these people to life in all their complexity.

Caroline is a social worker whose compassion can’t quite be contained within her professional boundaries. Stetson is deft in showing us that tension between compassion and professionalism in her finely drawn relationship with a client named Lourdes (Emma Ramos), who has just aged out of the social service system and who eventually feels the need to pull away from Caroline’s attentions. And we see it developing as she works with Karlie and Peter, first in relatively innocent ways, and then in more troubling ethical lapses.

As for Karlie and Peter, they acknowledge that they were “stupid” to mess with drugs — but when they argue that they’re not mean or bad people, we know that it’s true, and it’s Caroline’s urgent need to save them that gives the play lasting emotional impact.

Even Caroline’s boss, an ambitious bureaucrat named Cliff (Gregory Maupin), is surprising complex. He’s been left behind by a previous administrator — and anyone who has ever worked in any kind of bureaucracy will relish both Gilpin’s writing for this character and Maupin’s exquisitely crafted portrayal.

And it must be noted that there are two remarkable performances from Rebecca Hart (as Karlie’s mother Cindy) and Todd Lawson (as Cindy’s minister, Pastor Jay) who join in the effort to seize permanent custody of Luna Gale so that she can be saved before the imminent end days arrive. In a play populated by flawed characters, these two are no exceptions — but there’s nary a hint of caricature in either performance, and Hart seems to me to find the essence of Cindy’s character in every movement and facial expression. •

Decidedly lighter theatrical fare is on hand at Bunbury Theatre over the next week. This is a multi-faceted company, of course, but it’s one that especially thrives on comedy, and it’s hard to imagine a better match than Bunbury and “The Two Musketeers” by Jon Jory, longtime Artistic Director of Actors Theatre. The premise is that a small company afflicted by financial cutbacks finds itself unable to fully staff a play based on the Dumas novel, “The Three Musketeers.” Juergen K. Tossman directs the production, with performances by Jeremy Sapp, Neil Brewer, Allison Collins, Scott Goodman, Virginia Pollack and introducing Brandon Jones as d’Artagnan. •