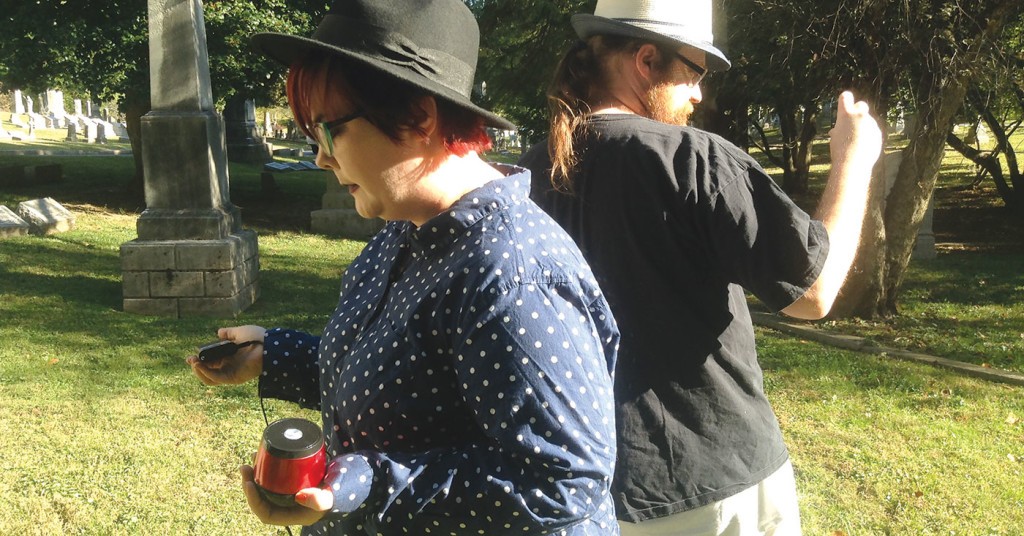 Last June, Jenny Floyd finally went to see her eye doctor after suffering increasing headaches and loss of vision. The optometrist did an initial exam, then referred Floyd to a specialist.

After more tests and an MRI, she received one of those maddeningly vague diagnoses. Floyd has idiopathic intracranial hypertension (IIH), sometimes known as pseudotumor cerebri. IIH is an increase of pressure inside the skull, but doctors have no idea what causes it. It leads to headaches, and it can affect optic nerves, causing blindness.

Doctors treat it with a drug called acetazolamide, but again, they don’t really know why IIH happens, so at best they are keeping symptoms at bay. Soon after her diagnosis, Floyd decided to follow up on a lifelong interest and started ghost hunting.

With the popularity of shows like Syfy’s “Ghost Hunters,” amateur investigations into spirits and unexplained phenomena have soared. The Internet has a seemingly unlimited amount of information on the subject, most of it conflicting. Digital tools for recording sights and sounds are cheaper than they have ever been. Most people have an audio recorder and camera in their phone, and that’s enough to go find an empty house and start investigating.

Louisville and Southern Indiana have plenty of local lore; places like Waverly Hills Sanitarium, The Culbertson Mansion and every cemetery in the city are all said to be haunted.

It was a disembodied voice at Waverly Hills that convinced a young Jenny Floyd that ghosts were real. In an interview with LEO, she recounted the moment, explaining that she was warned, ”Beware the butcher,” just before walking into a room that she later learned was Waverly’s operating room.

In person, Floyd comes across as only slightly quirky. Several steps away from full on goth, she has some purple eye shadow and a fun hat, but she mostly seems like a fairly normal woman. Accompanying her is her husband, Jacob Floyd, with a ponytail, a straw pork pie hat, and a tee shirt, as well Jenny Floyd’s paranormal mentor, Kay Owen. Owen, a woman in her 50s with a voice that suggests it’s not the years but the mileage that counts.

Owen has been involved with organized parapsychological investigations for several years. She throws around jargon, scientific sounding words and initialisms: “In 2003 I started my own team, called S.I.G.H.T., or scientific investigative ghost hunting team,” said Owen. Working with that team, and with Dr. Brian Laythe, with whom she’s published work in the Journal of Parapsychological Investigations, Owen often uses equipment far more sophisticated than the comparatively simple tools the Floyds employ.

Jenny Floyd’s go-to tool is her ghost box. It’s a radio that has been altered so that it scans ceaselessly through the entire dial, never stopping for more than .3 seconds. Investigators have reported hearing voices and sentences through the static. A single word or sound is most likely just a snippet from a radio station, but “If it speaks in more than one syllable, or answers a question, it makes you wonder,” said Jacob Floyd.

On a Ghost Hunt

It’s a bright, crisp fall afternoon when I meet Jacob and Jenny Floyd at Cave Hill Cemetery. We chat amiably about the weather and artisanal coffee while we stroll across Cave Hill’s rolling front lawn and make our way back to the graves.

The grass is still deep green, but a few of the trees are starting to turn orange and yellow, as their leaves prepare for their own deaths.

This is a pretty low key investigation. Sometimes investigators will have a huge array of equipment, much of it with fancy names: electromagnetic detection units, ultraviolet light spectrums, dozens of cameras and digital audio recorders, the R.I.G.S. system.

Jenny Floyd has her ghost box, and Jacob has a small digital camera. They stroll from grave to grave, walking down the wide grass pathways of Cave Hill that were originally designed as paths for horse and buggies. They could almost be bird watching, with Jacob Floyd calmly snapping pictures, and Jenny Floyd’s quiet murmur. Her murmur is a constant stream of polite questions and invitations. “Would you like to say hello?” she frequently asks. “I have a device here where you can hear your voice.” Often she asks permission: ”Is it OK if we talk to you?”

She’s gentle and sweet. More than anything she reminds me of a camp counselor I used to work with, who was a genius at coaxing scared kids away from their parents on the first day of camp. It’s all a far cry from the picture that is generally painted in films and reality TV. There is a sense of calm, not urgency. There is a sense of love, not fear.

Just when it all seems so very relaxed, Jacob Floyd suggests we walk over to a specific grave. Under the name Decker, is a weathered stone wall. There is an archway that suggests before it was mortared over, this was an archway to a grave that one could walk straight into.

Jacob Floyd starts to point out a specific pattern left by the erosion of time and the elements, but before he even gets into what he thinks he sees, I can already make out a face emerging from the chaos of erosion.

Just as I’m staring into what would be the eyes of the face, Jenny Floyd gently asks, “Would you like to talk to us?” and a calm and deep voice answers from her ghost box, “Yes.”

Immediately all the hair stands up on my body, and Jenny Floyd starts asking the voice follow-up questions.

There is no response. The word “yes” fits inside the .3 seconds that the ghost box stays on each station. After, it’s easy to write off that moment — serendipity aided by a dash of confirmation bias — but it’s impossible to write off the feeling of that moment, like hitting a jackpot on a slot machine, getting a first kiss and taking a shot of good whiskey, all rolled into one instant.

It was only on the way out of Cave Hill that Jenny Floyd mentioned her IIH, which she mostly refers to as her pseudotumor. It’s an afterthought to her, not the framing device for an article.

She talks about the headaches, which she still gets, and the vision loss and problems. She says paranormal investigating helps her keep her mind off the frustration and the uncertainty.

Though she started talking to the dead shortly after finding out about her pseudotumor, she doesn’t cite that as the biggest difference in her life post-diagnosis. “It affected my life by making me realize that I need to go out and live it and not let small things stand in my way,” said Jenny Floyd. “I try to keep a positive outlook on life.”