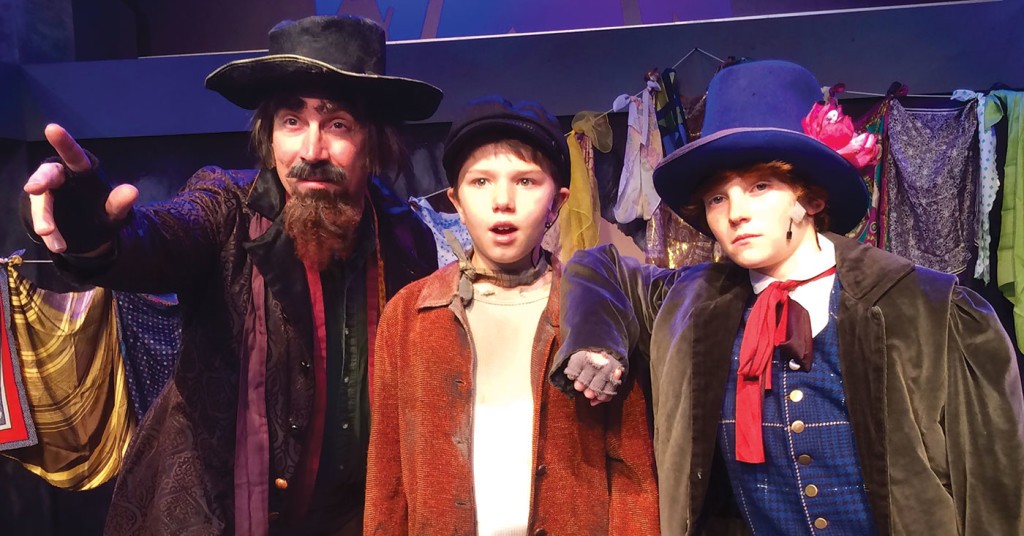 The 1960 musical by Lionel Bart is based on Charles Dickens’ second novel, “Oliver Twist.” Dickens’ novel is the basis for multiple adaptations including an award-winning 1968 film version of Bart’s musical, and a more liberal adaptation of the source material, “Oliver and Company,” a Disney animated film from the 1980s.

The story centers around the orphaned Oliver Twist, who suffers a series of misadventures before finding a loving home. Along the way, he falls afoul of a group of child thieves, run by the elderly and exploitive thief Fagin.

CenterStage artistic director John Leffert is well aware that the beloved musical is decidedly lighter than the socially-conscious source material.

“I direct it in a dark manner, as I think Dickens intended it. These are dark people. There is murder, abuse. That’s my take, and we stay true to the original source”

The mix of light and dark is one of the elements that makes “Oliver!” an enduring favorite. One of the characters who provides a good bit of both is Fagin, a role filled by Pandora Productions artistic director Michael Drury.

Drury has wanted to play this role since he first auditioned for it in the ’90s.

“I was called back for it at Music Theatre Louisville back in the early ’90s. I was really too young for it then, and I didn’t get it. I did spend some time working on him and working on those songs, and it’s been something I wanted to revisit.”

Drury will no doubt be stellar, with stand out songs like “You’ve Got to Pick a Pocket or Two” and “Reviewing the Situation.” But the real stars of any production of “Oliver!” are the large ensemble of child actors, including the titular lead, Oliver, and the street smart Artful Dodger, who lures Oliver into a life of crime.

Working with children in live theatre presents its own challenges, starting with casting. CenterStage, like many theater companies in Louisville and beyond, audition for their entire season well in advance. CenterStage’s auditions for their 2015-2016 season were held last February.

“Well, when you’re 10, 11, who knows what you’re going to be like in several months; voices can change,” said Leffert, who has encountered this problem in the past. “I cast ‘The Sound of Music’ kids way early,” said Leffert. “We got to rehearsal and Brigitta was the tallest child. She towered above Maria and Liesl and Louisa.”

For this production of “Oliver!” Leffert auditioned and cast 24 child actors last February during the open auditions. The kids will all appear in some role, but Leffert held a special round of call backs for the roles of Oliver and Dodger much closer to the time of the actual production.

Drury says working with children co-stars is a treat. “I do really enjoy watching how they process information given to them from John or the musical director and how they put that into action.”

While the children’s roles were open to anyone who auditioned, Leffert sees producing shows like “Oliver!” as a very important part of the theatrical training program that CenterStage offers at the Jewish Community Center (JCC). “If I’m not giving them these opportunities to actually perform, then what am I doing?”

Wether they are in JCC’s program or not, Leffert says he sees it as a chance to teach. “I think I always approach everything as a teacher.” Leffert spent almost a decade in the public school system before he became a full-time director.

He expects just as much work and dedication from the child actors as he does from the adults.

“I don’t buy into the cute factor. They have to learn that it’s hard work, and there is discipline involved.”

While Leffert will most likely get some great acting out of the kids, there will undoutedly also be some cuteness.