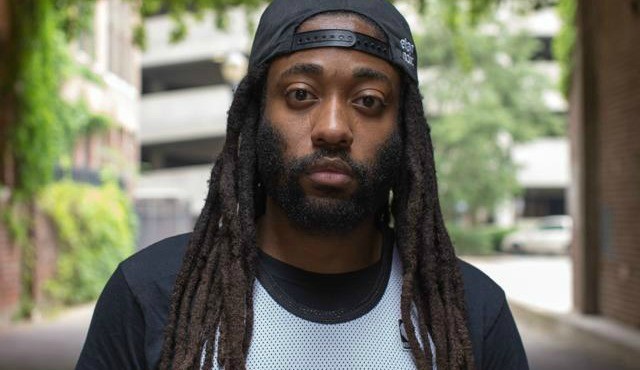 Defining Five is a series that kicked off at Haymarket Whiskey Bar last night, where, each month, four people/groups from the Louisville music community pick five songs that have moved, inspired or impacted them and then play them during a DJ set. The day after each event, LEO Weekly will publish an interview with all four people/groups to get some context as to why each song was selected. (The next Defining Five event will be held on Nov. 17 from 5-7 p.m. Stay tuned to Haymarket’s Facebook page for updates.)

“Damaged Goods”
by Gang of Four
from the album “Entertainment!”
“When I first started going out and seeing other DJs in Louisville, this was kind of like the song that everyone was playing. Everyone was kind of real hip to it and it got me into dance punk completely.”

“Disorder”
by Joy Division
from the album “Unknown Pleasures”
“I’ve spent a lot of time dicing this record down. I was even in a Joy Division cover band with some buddies. This record is so creepily dark that it kind of stops you in your tracks. I have always been a fan of Ian Curtis and I’m a huge New Order fan because of how much I love Joy Division.”

“London Dungeon”
by Misfits
from the album Misfits
“This is one of the first punk bands I listened to in my entire life. I remember watching “Welcome to Hell,” which is a skate video and my favorite skater at the time, Jamie Thomas, was skating to the song “London Dungeon,” so it’s been in the background of my life since I’ve been 16 years old and it never really went away.”

“Marque Moon”
by Television
from the album “Marque Moon”
“I spent a lot of time in New York City one summer and this was kind of like the soundtrack — and this was a band that played at CBGB in the late ‘70s, early ‘80s. They’ve also spawned a lot of other great bands in the New York area. This is a staple when I just want to chill and hang out.”

“Kill All Hippies”
by Primal Scream
from the album “XTRMNTR”
“This album bridged electronic music with rock n roll for me and was one of the first times I was like, ‘This is amazing.’ And it was the thing that got me into electronic music.”

“I Remember”
by Molly Drake
from the album “Molly Drake”
“The recording carries a lot of energy and the lyrics are very beautiful.”

“Humbled in Love”
by Leonard Cohen
from the album “Recent Songs”
“This record is very important to the idea of love that I have. It was introduced to me at a time when I was struggling with the idea of love.”

“In Search of Truth”
by Lonnie Liston Smith
from the album “Astral Traveling”
“This song is very important to my sense of discovery. In the last few years, I’ve really gotten into jazz and I think this record is the cream of the crop.”

“Looking For All (All Rendered Truth)”
by Lonnie Holley
from the album “Just Before Music”
“He just started putting out recorded music in the last few years. It’s very raw and improvisational, which is an important part of music for me. It’s just a release of something that is pure.”

“Always Together”
by The Dells
from the album “Always Together”
“I think it is one of the greatest R&B vocal tracks ever recorded. It’s a really powerful and intense song. And the harmonies are beautiful.”

“Shangri-La”
by The Kinks
from the album “Arthur (or the Decline and Fall of the British Empire”)
Guthrie: “It’s one of my favorite songs, by one of my favorite bands. I feel like it’s such a good combination of tone. It has these lovely verses. It’s very powerful, but then it goes back down.”

Bender: “Lately people have been referring to La La Land, which is our headquarters, as Shangri-La, so it felt like a necessary thing to put in there.”

“Lovers are Strangers”
by Chinawoman
from the album Party Girl
Bender: “She has this amazing, androgynous voice — most people don’t know whether she’s an alien or a human. It was something that I recently got really into and then she simultaneously got into.”

Guthrie: “We were recently on a road trip, on tour, and she showed me the song “Party Girl” and I really liked it.”

“Bring It On”
by Nick Cave and the Bad Seeds
from the album “Nocturama”
Guthrie: “Funny story: when we played it a couple of gentlemen came up and said, ‘Of all the Nick Cave songs you could play, why would you play this song and why would you choose a song from this album,’ implying it was the worst decision I could have possibly made. I will say what I said to that very sweet and wonderful man who was probably just trying to make conversation and probably thought I had something profound to say: I just really fucking like this song. It’s really good.”

“Hero”
by Neu!
from the album “Neu!75”
Bender: “Amazing German band from the 1970s. This was picked for Kevin; he couldn’t be here. This is a song he introduced to me and I really connected with it. It’s just such a beautiful song and it’s the album that I — and Kevin — listen to whenever we need to recenter. It’s a really meditative album.”

“Junkie Man”
by Rancid
from the album “…And Out Come The Wolves”
Guthrie: “We geek out super hard to this record, all the time…”

Bender: “…whenever we are in the car, basically. When we met, we were in the pool and she discovered that I have a Rancid tattoo. And we bonded immediately on our love for Rancid, because we are so used to being ridiculed for such. We knew this wasn’t going to be a crowd favorite, but we knew we had to play it. It was our coming together.”

“Blueprint (Mama Loves Me)”
Jay-Z
from the album “The Blueprint”
“The reason I played this song is that my momma loves me. And the song is an epitome of what it was like at the time when I was listening to the song. I was helping my mom out. I really didn’t have too much money or too much help and I was kind of by myself. My mother was sick. So, I kind of always thought about the first two lines: ‘Momma loved me / Pop left me.’ And that kind of tied in to how I was feeling at the time.”

“Be (Intro)”
by Common
from the album “Be”
“I thought the song was very powerful. The lines and the imagery, the picture that he was painting, was so vivid, like when he said, ‘Waiting for the lord to rise / I look into my daughter’s eyes and realize, I’m going to learn through her / The messiah might even return through her / And, if I’m going to do it, I gotta change the world through her.’”

“I Wonder”
Kayne West
from the album “Graduation”
“That’s the song that’s playing in my head any time I have a big show. I always look at the lyrics of these songs, as you can tell. The first part starts out: ‘I’ve been waiting on this my whole life / These dreams keep waking me up at night.’ And I think that that’s just so true. I’m a vivid dreamer. My last album was called ‘Grand National Dreams.’ I write songs in my dreams. It’s just so real to me.

“I’m Not You”
by Clipse
from the album “Lord Willin’”
“It’s just such a powerful thing to say: ‘I’m Not You.’ To be happy with who you are. It’s such a great line to say and it’s such a great title for a song. Also, what was so great about that song is the production is so dark … and the topics. Like where Malice of Clipse was like, ‘I’ve seen her pay for her fix when her kids couldn’t eat / and with that in mind, I still didn’t quit / And that’s how I knew, I ain’t shit.’ It was so real, to me, that somebody could be on drugs so bad that they could pay for a fix of drugs and couldn’t eat food, with their kid right beside them … and that he still didn’t quit. It pretty much validates a drug dealer’s mentality. And those were things that I seen growing up in my neighborhood — from dope fiends living in my household. I’ve had those instances where I’ve went to grab a spoon to eat cereal and the spoon was burnt up.”