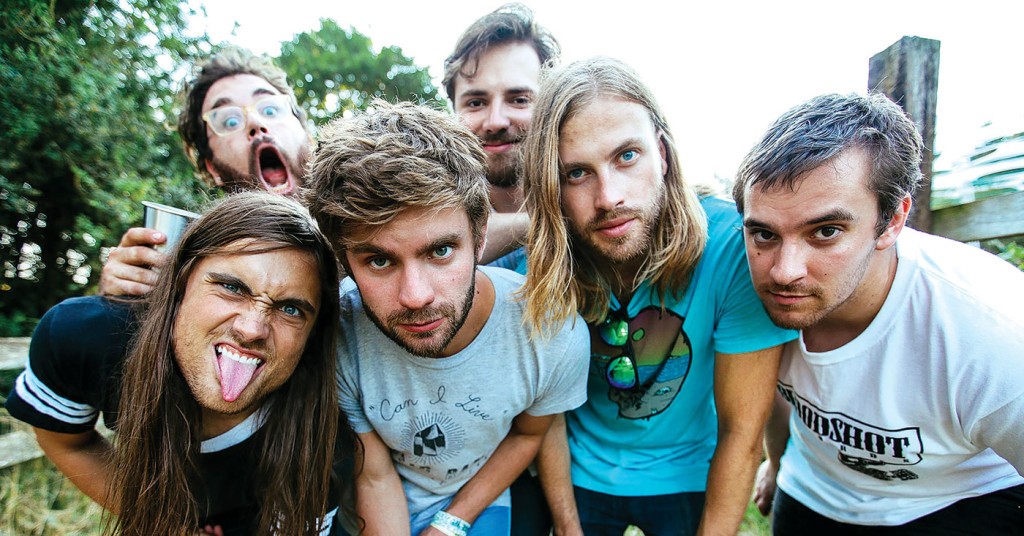 Trying to get ahold of Emmett Miller, guitarist and singer for the six-piece rock ensemble Diarrhea Planet, was no small feat. Calling just a little shy of the scheduled time, the phone went to voicemail. Miller called back about 45 minutes later, sheepishly reporting that he had missed his interview because of band practice. That’s what it is to be in Diarrhea Planet, one of the hardest working bands out in the country: you get lost in the music.

Starting out as a noisy side project informed the band’s colorful name. After a line-up shuffle though, they buckled down and found their groove, a decidedly less abrasive path that blends elements of punk with four-guitar harmonies for a big indie-pop sound.

“We started in 2009,” Miller says. “It was Jordan and Evan P. Donahue, they wanted to start a noise band at Belmont [University in Nashville], and they chose the most abrasive name that they could. And then Evan brought a pop element to it, and brought on Brent and Mike on guitar and bass. It’s pop, filtered through metal … that’s what it turned into.”

Diarrhea Planet aren’t what you think of when you think Nashville. But there are multiple upsides.

“The cool thing about it being a country town is that the infrastructure is all there,” Miller says. “We have the best recording studios and recording musicians. We’ve never been denied gigs because we’re not a country act.”

Having evolved to include four guitars, they work hard on their arrangements.

“We landed on four, because five was way too many and three wasn’t quite enough,” Miller says. “We play across the neck to form piano-like block chords. To sound a little more lush, it’s just as simple as figuring out where someone is playing on the neck, or to play with a lead, or to just step out of the way.”

Miller keeps it simple though, admitting, “I hope we can inspire kids to pick up a guitar. I want people to walk away from our show like they just watched School of Rock for the first time.”

You can catch Diarrhea Planet this Friday, Oct. 9, at Zanzabar with Brenda and The Tommys.