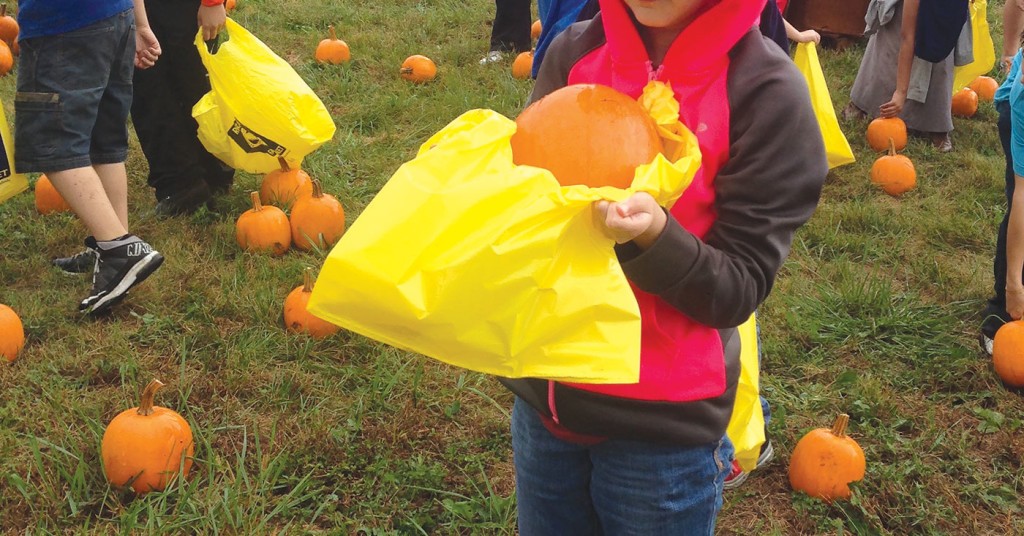 The annual farm field trip is anticipated by children and chaperones alike. Hayrides. Pumpkins. Using one’s GPS in the corn maze because one is lost. Last year was magical. This year, the farm trip was marred with heavy rains, no maize maze, whining children soaked by muddy puddles, and very loud voices competing with rain dumping onto corrugated metal roofs. Formerly scheduled programming was replaced with an overly stimulating triad of farm fun disaster.

Inside the farm store the children sat on the cool floor to watch a 20-minute segment of a documentary called “Farmland.” The eldest farmer prefaced the film with her opinion that the young farmer in the film was a foolish woman. Despite the “foolish” farmer’s success — the one-woman operation supplies organic produce to a robust market — she worked hard to thrive despite the hardships all farmers share.

“She made a bad choice,” the elderly farmer warned the children, for risking her life savings to purchase a small farm at the inexperienced age of 23. Without having been raised on a farm, the woman in the film followed a dream with the same bravado that nudges each of us toward meaning and personal satisfaction. She did it younger than many, and found her place in the world.

The kids sat wide-eyed and crisscross-applesauce, absorbing a message from an authority figure telling them what they can’t do. I stood, shocked, wondering if any of the other adults were disappointed that she beat the kids down before showing a film that was meant to be interesting. This is not effective education.

Our class moved to the next station for instruction by another farmer on the wonders of corn, from taproot to tassel.

“Corn sugar is just as healthy for you as regular sugar,” he said.

I snapped my mouth into a tight smile to keep my face shut. It was for the best.

“Look at all these products that contain corn!” At least 15 food products — barbecue sauce, soft drinks, breakfast cereals, et cetera — lay across the table displaying how amazing corn is. Indeed, it’s surprisingly versatile, but corn sugar and most of the products it sweetens aren’t food.

A brave boy spoke up, and said what no polite adult would, “Too much sugar will give you diabetes.”

“Well, it can for some people,” replied the farmer. “You just need to eat your sugar in moderation.”

“Just as healthy.” “Need to eat.” “Moderation.” These are permissive, and brazenly directive messages. We now treat children for adult-onset diabetes, high cholesterol and heart disease. To believe our corn abuse hasn’t played a role is foolish.

Our final destination was a short walk across a wet field during a break in the rain to the hoop house sheltering the farm-to-table demonstration. On the trailer that would be the hayride in dry conditions, the students sat on straw bales absorbing instructions on how to make pumpkin pie in a bag.

A little canned pumpkin, a little instant pudding mix, and a splash of milk inside 28 snack-size Ziploc bags all smashed between 28 small hands, and then squirted onto factory-crushed graham crackers inside 28 rigid plastic cups.

The kids loved this activity. It was messy, aromatic, and tasty; however, by no stretch was it an accurate representation of farm-to-table eating.

I don’t want to spread negativity about rural Kentucky. Louisville happens to be marching into the future of food production, partnering with our rural neighbors and sending economic ripples across the state. It’s distinctly and deliciously urban.

But, on an educational field trip, my expectations run higher for our kids. We need to be aware when those who’ve made a career of food production perpetuate misinformation about food and its health effects to kids, and to the parents who make meal decisions. The messages we took from our farm noir trilogy of doom were, don’t farm, eat corn sugar and eat processed foods. I expected more from down on the farm — you know, the source.

Our city, our leaders, our FoodPort, our JCPS: They support what I’m saying. We can do better. We can innovate. We can feed ourselves!

As I wrap up this column, JCPS is serving a lunch that’s entirely local, save for a few schools that won’t be serving local apples. The Portland FoodPort promises to whet the West End’s food desert. And, 4-H programs across the state are available to our families through university extensions, offering STEM programs essential to our future innovators who won’t take ‘don’t farm’ for an answer.

Never trying is the worst kind of failure, and the future of our food system has little room left for neglect. Let no one tell the children they’re incapable.

Rachel Hurd Anger writes about food responsibility from production to consumption, and she’s been a regular contributor to Chickens, Urban Farm, and Hobby Farm Home magazines. Read her weekly advice for urban chicken keepers at UrbanFarmOnline.com/ChickenQuarters.