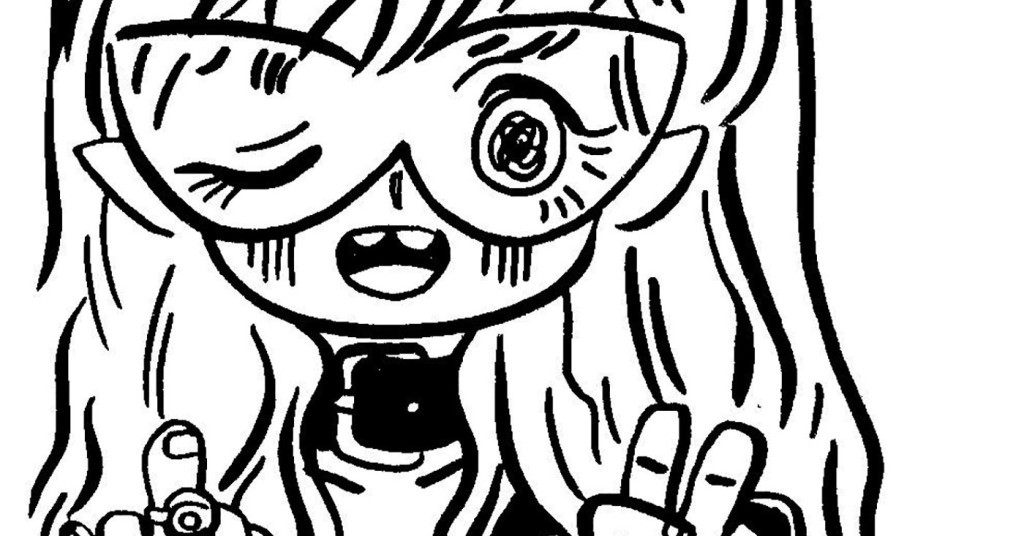 Recently I came across a flyer on the Internet. It featured a clean, simply drawn piece of cartoon art, and proclaimed the impending release of “SMUT: 100 Filthy Drawings by Yoko Molotov.”

The image on the flyer is of a sweet- faced young woman in a leather jacket winking at the viewer and smiling. You could describe her face as angelic except she has devil horns. And wait, she’s flipping the viewer off, and there is one bare breast peeking out from under her jacket. Also, between her legs is a huge dick that transmutes halfway down its shaft into something that looks a lot like a singing bird.

After I friended Molotov through the power of Facebook, she agreed to an interview. When I arrived at our arranged meeting spot, she was already waiting, wearing cat eye glasses and a heavily decorated punk looking jacket, bristling with pins and buttons. Her black hair is cut into something pretty close to an old school Betty Paige bob.

We sat down and got to talking. Molotov is a multimedia artist. She draws, makes videos, plays in the avant-garde punk band Sweatermeat, dallies with another singing group called Tycoon Teens and performs solo under the name Harpy. She has self-published several books of poetry.

At the start of our interview, I asked her questions about her art, and she seemed uncomfortable with straight answers. I started to get a strange vibe.

Her weird tone started to makes sense, and then she came right out and said it: “Everything is performance art. Fuck with everybody all the time.”

“So is this interview performance art?” I asked her.

“Yeah, I made all that up. None of that stuff is real.”

She told me her name is actually Gabriel and that she’s a calculus major and an accountant who poses as a self-indulgent punk rocker. Then she winked, as if to make sure I knew that wasn’t true either.

“Sorry,” she replied. “The world is full of liars.”

We embarked on a 20-minute jaunt of lies and silliness. I mostly followed old theater improv rules, and who knows what playbook Molotov was working with. She would make statements, then deny them. She claimed penguins could fly, and at one point when I had talked a little too long, she teased me by asking, “Is this interview about you or me?”

Finally, she asked me if I wanted to talk about her art, and we got down to business. But any “facts” offered in this article should be taken with a grain of salt.

Molotov tries to draw every day. “I’ve been drawing every day since I was little. I change as I grow, and I decided about five or six years ago that I was going to do wholly confessional work.”

“SMUT” is a collection of these daily drawings. She describes her work as “transgressive” and “gender-fluid.” She matter-of-factly stated, “There are no sacred cows for me.”

The flyer for “SMUT’s” release party is a fairly solid representation of the work. While Molotov declined to talk about her own gender or sexuality on the record, her work includes of lot of what she calls her “dick girls.” There are also topless women in hijabs, animals without real world counterparts and singing ass cheeks.

Despite Molotov’s self-proclaimed pretension, there is a sense of play lingering around her and her work at all times. It almost seems at odds with her rigorous daily practice and prolific output.

But just when I was tempted to start taking Molotov very seriously, she made it clear that would be unacceptable. “Art is a joke. Everything’s a joke. You shouldn’t take yourself or any art too seriously.”

I guess we’ll just have to embrace her duality.

“SMUT” drops this Saturday, Sept. 19, at Open Gallery. You can buy the book, check out other art by Molotov and catch a pretty rocking punk show featuring Hanoi Jane, Cold Star and Scuzz Master.