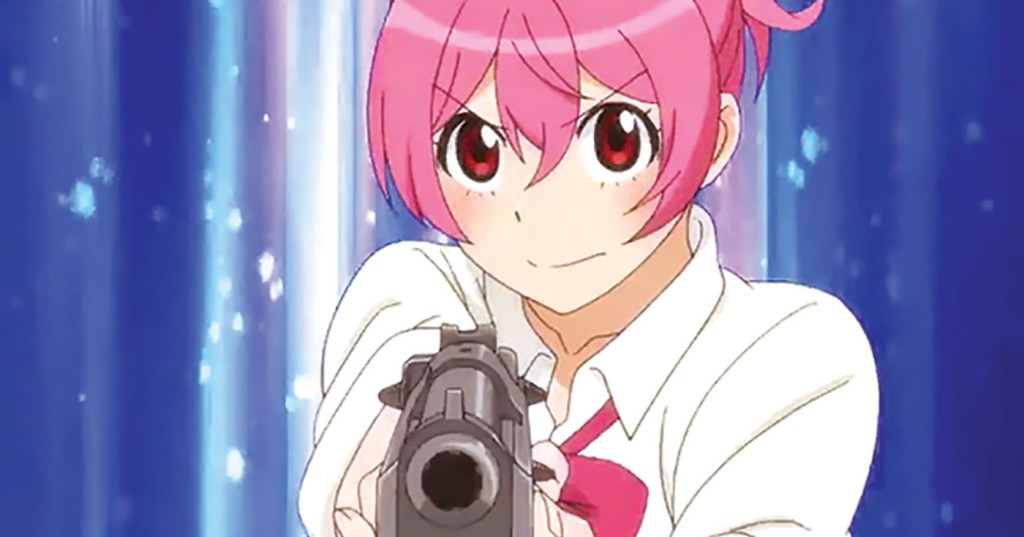 HAMATORA THE ANIMATION
2014; $39.98-69.98; UR
A butt-head friend of ours told us that this was about talking hamsters who save the world. Thanks a lot, dude. Actually, it’s a surprisingly lighthearted rodent-free anime series set in a world where some people have special powers, though no one seems to know why. Several of them, all teens and younger, who work for the titular detective agency, go on the case when a serial killer starts murdering others like themselves. Done in classic “big-eyed waif” style, with artwork as breezy and playful as the voice-work, and only the slightest blush of teasing fan service. Won’t change your life or anything, but entertaining.

SABAGEBU SURVIVAL GAME CLUB
2014; $34.98-59.98; UR
The Japanese word “Yuri” implies a harmless romantic tryst or relationship between two — often animated — female characters This anime series flirts with yuri-yuri between a new student at an all-girl school who is rescued from a horny groper by another student, the head of the school’s Survival Game Club, which she joins. Here the girls play “war” with airsoft pistols, but the real fun comes as their gun-toting power spurs their imaginations — long held in check by Japanese culture — to include bloody ambushes, sexually aggressive fantasies, cross-dressing adventures, et cetera. Rendered in innocent, pastel colors, with chirpy-child voices, the end result is adorable, knowing and very entertaining.

HARPER LEE: FROM MOCKINGBIRD TO WATCHMAN
2015z $17.98-24.98; UR
2011 saw the release of Mary McDonagh Murphy’s seminal doc on Harper Lee’s “To Kill a Mockingbird” entitled, “Hey, Boo.” Here she updates that work and expands it to include the tortured path to publication of “Go Set A Watchman”, Lee’s recently released prequel to Mockingbird, a work which has divided both fans and literary critics alike. While panned by many, Watchman has sparked a renewed interest in American literature unlike anything seen in the past half-century, with everyone from Lee’s family, to celebrities, politicians, and sociologists weighing in on its merits. An insightful and thoroughly researched look at modern culture.

PITCH PERFECT 2
2015; $16.98-34.98; PG-13
Sequel to the surprise hit of 2012 about a group of talented misfits winning the Big Game, or at least its chorale equivalent. Elizabeth Banks takes over as director, her first full-length film in that capacity, and she does a great job, wisely making this far more female-centric, with added sex appeal and a lot sharper edge. Anna Kendrick, of course, sings her ass off, with Rebel Wilson’s “Fat Amy” providing most of the pratfalls. Frankly, we hope they make a million of these things. Our highest recommendation.

RESULTS
2015; $29.98; R
While we have limited tolerance for Guy “Jack Irish” Pearce, we could watch Cobie “Agents of SHIELD” Smulders all day long, and they’re both in fine form in this minor comedy as personal trainers to unhappy, divorced rich-guy, Kevin “Public Morals” Corrigan. All the players are mercilessly flawed, leading to lots of comic bad choices and even worse corrections as Corrigan’s swirling obsessions suck in everyone around him, including Giovanni Ribisi, Zoe “Boyhood” Graham, Constance Zimmer (“Agents of SHIELD”), and Brooklyn “Oh my freakin’ GOD!” Decker, who steals every scene she’s in (at least for us).

SAINT LAURENT
2014; $24.98; R
Okay, right up front: We expected to hate this flick. A 2½-hour artsy-fartsy French-language biodrama on fashion designer Yves Saint Laurent during the late 60’s and early 70’s? No thanks, we’ve got lives … But, ever intrepid servants that we are, we watched it and have to admit that we enjoyed the hell out of it. Director Bertrand Bonello could apparently make a movie about rotting puppies and it be clever and engrossing. Case in point: There’s a scene early in the film where YSL sits in a nightclub, watching a savage blonde dance to CCR’s “I Put A Spell On You.” At the end he tells her, “You need to come work for me, I will design a collection for you.” It’s mesmerizing, and somehow makes perfect sense. Check it out.

THE FAREWELL PARTY
2014; $19.98-27.98; UR
Despite the many obstacles — especially language and culture — you’ll enjoy this unique dram-com from Israel set in an old-folks home. Huh? Here’s the setup: The clever residents of a “retirement village” devise their own one-man euthanasia machine to help a terminally ill friend end their pain. Dead funny, huh? No? Well, when word gets out, others want to “borrow” the machine! This leads to an exploration of the many sides to this controversial topic. Okay, so it’s not a Marx Brothers laugh-out-loud yuck-fest, but it is a smart film that handles a taboo subject head-on with surprising wit and grace.

JUMANJI
1995; $14.98-19.98; PG
This venerable kid-flick finally makes it to a long-overdue, stand-alone – and reasonably priced – Blu-Ray/DVD combo pack, stuffed to the gills with no less than 10 great bonus features. Robin Williams is at his manic best as the man-child who escapes from a mystical board-game, followed by a jungle-load of African animals who all burst rampaging throughout a suburban home. The comic chaos, most of it generated by then-state-of-the-art CGI, was every kid’s dream. Co-stars Kirsten Dunst, Bonnie Hunt, Bebe Neuwirth, and David Alan Grier. Also newly given the stand-alone Blu-Ray treatment, similarly-themed “Zathura: A Space Adventure” and the more introspect “The Indian In The Cupboard.” Your kids deserve a treat.

THE NANNY: SEASON 4
1996; $27.98-34.98; UR
While Fran Descher’s nails-on-a-chalkboard screech might curdle milk, you can’t argue with success. This season they cranked up the flirt-factor, beginning with Fran and her rich boss (Charles Shaughnessy, “Mad Men”) returning from Paris, during which he had expressed his, um, affections for her (wink wink, nudge nudge). But once back in the states she continues to date others, beginning with blind Jason “Seinfeld” Alexander. More titillation follows as teenage Maggie (Nicholle Tom, recently of “Gotham”) begins dating a 25-year old man – leading 39-year-old Fran to date his 25-year-old friend! Silly, we know, but you can’t beat Borstch Belt humor.

THE OTHER MAN: F.W. DE KLERK AND THE END OF APARTHEID
2014; $17.98-24.98; UR
While much has been made of the life of Nelson Mandela and his long struggle to end South African apartheid, too few Americans know much about DeKlerk, the SA president who was so inspired by Mandela that he abolished the centuries-old practice forever. Originally Mandela’s jailor – and a life-long believer in the God-given superiority of whites over blacks – he spent many hours (gasp!) talking with him, eventually realizing the inevitability of an all-consuming race-war unless changes were made. Less than four years later he would be the country’s Vice President, campaigning openly for freedom and equally for all South Africans. A complex and intriguing doc.

A more complete listing and free vids at VideoTapeworm.com