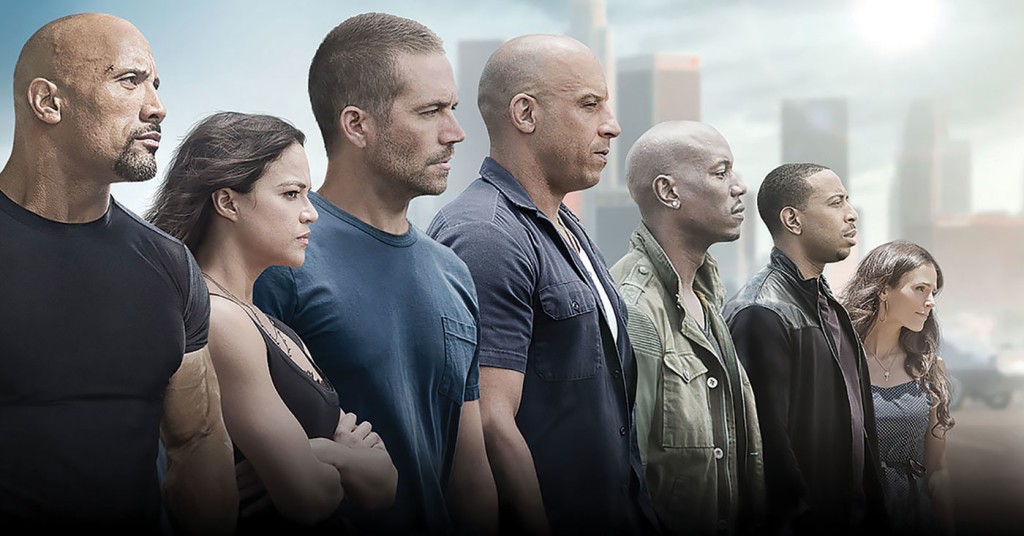 FURIOUS 7
2015; $24.98; PG-13
Man, this car-nut juggernaut just won’t quit! Vin Diesel, the late Paul Walker, Jason Statham, Michelle Rodriguez, Jordana Brewster, Tyrese Gibson, Ludacris, Dwayne Johnson and the rest of the gang continue their patented automotive mayhem, squeezing in a wee bit of plot along the way, and fans can’t seem to get enough. Any further review is redundant: just pick out your favorite media — there are about a half-dozen choices, including a surprisingly popular Chinese-language Hong Kong Blu-Ray import that plays on U.S. machines — gather your friends, and pop open the Coronas. Also available: all seven “Fast & Furious” flicks in a wheel-shaped Blu-Ray collector’s set for around $70 bucks. Enjoy.

LOVE & MERCY
2014; $9.98-24.98; PG-13
A long-overdue and thoroughly entertaining biopic on The Beach Boys’ mad genius, Brian Wilson, cleverly told by having two actors — Paul Dano and John Cusack — play Wilson at different points in his life. While their songs are now iconic, in the day they were marketed as just the latest flavor of bubblegum pop, soon to be forgotten. It was Wilson’s unpolished musical genius — and damned hard work — that turned these throwaway car-and-beach tunes into modern national anthems. But all that effort, combined with the lingering effects of childhood abuse and some very nasty drugs turned Wilson into a babbling recluse. How does the story end? Watch the movie.

AQUARIUS: SEASON ONE
2015; $24.98-59.98; UR
David “Fox Mulder” Duchovny’s long-awaited return to broadcast TV typecasts him as a homicide investigator circa 1967 (our choice for America’s greatest year ever). But what makes this so intriguing is the brilliant script which brings to life an early Charles Manson (Gethin “Game of Thrones” Anthony), before he was exposed as completely insane, here carefully gathering and indoctrinating his mostly-female followers, including too-young runaway Emma “Inherent Vice” Dumont. Grey Damon (“Twisted”) plays Duchovny’s troubling young undercover officer, his eyes and ears during this socially explosive era. Not perfect, but we like it.

CSI: THE FINAL SEASON
2015; $44.98; UR
To be perfectly honest, we stopped watching this show after William “Gill Grissom” Peterson left around 2008. So seeing the 15th season come to DVD inspired us to check it out again — and we were pleasantly surprised. The plots include such headline-worthy topics as medical marijuana, viral contagions, Wiccans, taunting serial killers and eBay “murderabilia.” Ted “Cheers” Danson now leads the cast, of course, accompanied by Elisabeth Shue and series originals George Eads, Jorja Fox, Eric Szmanda and especially Robert David Hall as the always interesting coroner — even Peterson (now the show’s executive producer) shows up for a final bow. We’re getting all misty.

DOLLFACE
2014; $21.98; UR
Originally titled “Dorchester’s Revenge: The Return of Crinoline Head,” we follow the usual bunch of low-rent horro-airhead college students, lead by Debbie “The Meryl Streep of Horror” Rochon, as they undertake a scientific investigation into an infamous, reportedly demonic, 1996 serial killing. Doesn’t go well. Does it ever? A sequel of sorts to 1995’s little-known slasher parody, “Crinoline Head,” and a festival favorite; one of the most decorated gore-films of recent days, highlighted by freakin’ enormous WCW wrassler John Kap as the titular baddie with a penchant for creepy old dolls. Highly recommended.

SISTERS: SEASONS ONE & TWO
1991; $34.98-44.98; UR
While few readers may immediately recognize this ‘90s NBC drama about four adult, er, sisters, those who do will tell you it had the greatest cast ever assembled on TV. Swoosie Kurtz (“Mike & Molly”), Sela Ward (soon to be The President in an “Independence Day” sequel), Elizabeth “Stargate SG-1” Hoffman and Patricia “Power” Kalember (who lived in Louisville for a spell) are four very different people with full lives and the associated baggage to inform their variant world-views. But their differences unite them in unpredictable ways when need be, such as when Ward’s squeeze — George Clooney! — gets killed. With Julianne “Mrs. Bruce Springsteen” Phillips, Heather “Alex from ‘Facts Of Life”’ McAdam, Ashley Judd and Paul Rudd.

THE LEGACY
1978; $19.98-26.98; R
A notorious Limey stinker if there ever was one, this seamy, steamy supernatural horror/mystery outing stars some of the most noteworthy actors of its day — Katharine “Butch Cassidy” Ross, Sam “Justified” Elliott and British vet John Standing, plus an appearance by The Who’s Roger Daltrey, five years after “Tommy” — making most of them behave like arrogant buttholes for 102 minutes. But because they are so unlikeable, you get to enjoy each painful, horrific demise without guilt or shame. Speaking of shame, Elliot does a legendary nude scene, banging Ross before taking a shower, his chest as wooly as that cheezy 70s moustache. Nice work if you get it, now on Blu-Ray.

CASTLE: THE COMPLETE SEVENTH SEASON
2015; $36.98-45.98; UR
Man!, we must really be slipping: “Castle” has been on the air since 2009 and we’ve never once mentioned it! The incredible Nathan “Firefly” Fillion plays uber-wealthy playboy Rick Castle, a crime-novelist who gets to ride with the NYPD, particularly comely cop Stana Katic. This season starts with a bang when Castle’s car explodes in a ball of fire – with him in it! Or is he? Duh. By this season the best thing about the series – other than the playful relationship between the two – is the many not-so-hidden comic references to Fillion’s many career hilights: “Firefly”, of course, plus “Percy Jackson”, “Gravity Falls”, “Community”, Halo vidgames, “Robot Chicken”, “Desperate Housewives”, numerous soaps, and our favorite, “Slither.” The guy is a likeable, accessible, walking boombox of entertainment who absolutely loves his fans. Yeah, we gotta a major man-crush going on, but the guy is just so damned fun!

MIDSOMER MURDERS: SERIES 17
2015; $30.98-59.98; UR
For those of you trying to keep up with many DVD and Blu-Ray versions, seasons, and oddly-numbered releases of this long-running perennial favorite … just give up and enjoy the ride. Neil “Life of Riley” Dudgeon continues as DCI John Barnaby of England’s “murder capital”, the beautiful, green and deceptively peaceful county of Midsomer, where apparently no one has ever died of natural causes. Our favorite in this set is “Murder by Magic”, in which a pub mistress is crushed during a magic show, revealing a strange conflict between the local church and a group of Wiccans. Bloody good fun and a Master’s Course in simple, smart entertainment, choc-a-block with Britain’s best actors. Enjoy.

NCIS: SEASON 12
2014; $68.98-76.98; UR
You can’t argue with success, and this “oldster-porn” series continues to rack up strong viewer- numbers thanks to an ever-evolving cast, imaginative scripts, and the endless parade of guest- stars – an inordinate number of which seem to die after several visits. This season starts off strong over the skies of Russia when Mark Harmon and Sean Murray’s helicopter is shot down in a plot involving a computer virus hidden in a man’s dead body. The team must hot-foot it to the Finnish border before the Russian army can find them. Complete nonsense, but entertaining and now available on Blu-Ray.