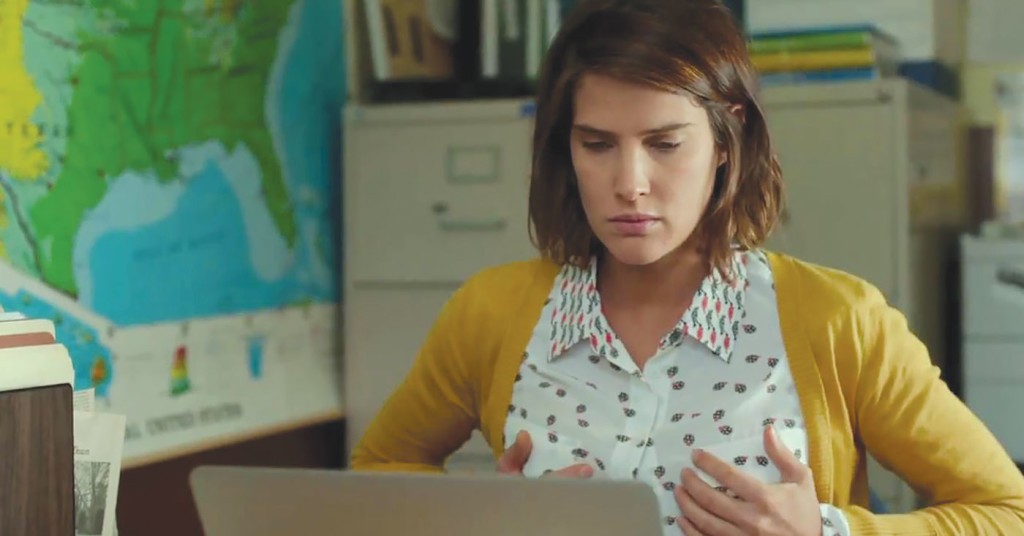 LYLE
2014; $21.98; UR
Some have heralded this 65-minute wonder as a modern-day “Rosemary’s Baby.” We won’t go that far, but it is a raw, surprising indie horror film with both feet firmly planted in LGBT+ reality. An expectant same-sex couple with a toddler move into an earthy New York City brownstone, lorded over by an icky landlady with boundary issues. But tragedy soon finds them, sending the mother-to-be (Gaby Hoffman, “Girls”) into a spiral of madness and paranoia, culminating in unexpected desires for the attractive model who lives upstairs. Transgender writer/director Stewart Thorndike (“Eyes Wide Shut”) has really struck a nerve with this very disturbing and original look at the dark crossroads of sexual identity and motherhood.

UNEXPECTED
2015; $24.98; R
As regular readers know (support groups standing by), we are drooling idiots over Cobie “Agents of SHIELD” Smulders, who has lately been making forays into light indie fare. This incredibly touching and funny drama finds her an unmarried high-school teacher, satisfied with her life and career, who wakes up one morning pregnant. Don’t you hate it when that happens? While struggling with the inevitable life changes that babies seem to demand, she is drawn to help a young black student in the same situation (Gail Bean of “Sex Sent Me to the ER” … really!). Their ensuing friendship is a vital, warm and a very open look at life in ways that the male-dominated film industry has never bothered to explore. The “R” rating is asinine.

BLACK COAL, THIN ICE
2014; $29.98; UR
It’s a shame that this excellent indie award-winner comes from China, because subtitled Chinese indies just aren’t as celebrated here as those from, say, Europe or Japan. We follow a pair of former cops trying to rebuild their lives after being discharged and disgraced over a troubled serial-killer investigation several years earlier. That’s when one notices the killer’s old calling card — he’s taking new victims! — so they set out to end his reign of terror at any cost. With a refreshing lack of Hollywood melodrama — no music-strikes when guns fire, no screams echoing through the night — making it all the more believable and affecting.

QUEEN CRAB
2015; $13.98; UR
There’s nothing we love more than a good-old, crappy, no-budget monster movie, and this one was apparently financed with a lemonade stand. It’s a SyFy howler written and directed by schlock-vet Brett Piper — he of “Psyclops,” “Arachnia,” and “A Nymphoid Barbarian in Dinosaur Hell” — with Michelle Simone “The Unwanted” Miller and stunning newcomer Kathryn Metz as eye-candy. Other than to say, “It’s a big crab movie, bro” the plot is the usual cable-TV nonsense made real thanks to Piper’s talent with CGI, some welcome stop-motion, and a complete lack of logic. Includes a peek at his upcoming “Triclops.” Man, do we love this guy!

THE BEAR
1988; $14.98; PG
The 25th Anniversary Blu-Ray release of pure movie magic. A French-made favorite of ours set in the wilds of 1800’s British Columbia (Canada, for the Kentucky-schooled), an orphaned bear cub must bond with a wandering adult Grizzly if he is to survive. The adult in question is a monster of a creature, with a grumpy disposition and no familial tendencies, more likely to consider the cub a meal than a companion. But, somehow, the cub not only endures, but comes to aid the adult in unexpected ways until they both confront a truly horrific enemy. Can you guess who that is? Simply breathtaking.

THE DUKE OF BURGUNDY
2014; $26.98; UR
Woof! Is this thing hot! Nordic sex goddess Sidse Babett Knudsen — who used her body in the most devilish ways for Swedish TV’s “Borgen” — plays a butterfly researcher with a decidedly dominating personality. She and her younger lover, Chiara D’Anna (2012’s vastly underrated “Berberian Sound Studio”) enjoy deep discussions, gentle mornings and increasingly painful S&M scenes. Often compared to “50 Shades Of Grey,” this is far more cerebral, with wonderfully kinky, dark Gothic imagery and surprisingly little gratuitous nudity, instead exploring how the Master/Slave relationship — any relationship, really — reacts to time and sunlight.

THE SLAP
2011; $24.98-39.98; UR
While you might remember the 2014 U.S. cable miniseries of the same name starring Brian Cox, with Melissa George as “Rosie,” this is the far superior original 2011 version from Australia. It stars Jonathan LaPaglia, Sophie “Hotel Rwanda” Okonedo, and, uh, Melissa George as “Rosie.” When a neighborhood barbeque is disrupted by unruly kids, one of the fed-up parents slaps one. This sets in motion a perfectly rational chain of events (if anything about parents and kids can be said to be rational), culminating in formal assault charges. Along the way there are accusations of racism, family-destroying secrets are revealed, and the fallacy of the “safe, quiet suburbs” is laid bare. Really hits home.

Looking for some wheels, junior? We’ll make you a deal rat-cheer on this classic 1983 “Christine” customized by Kentucky car-guy John Carpenter in sweet, sweet Blu-Ray with all the buttons. Yeah, She’s a demonic ‘58 Plymouth Fury if there ever was one, makin’ axle-grease of just about everybody, thanks to gear-head customizer Stephen King. Why, the only one to DODGE this marauding Mo-Par product is that other Kentucky boy, Harry Dean Stanton – because he’s the only character with a real name in the credits! Everyone else is, like, “third victim in alley” or “punk on motorcycle.” And all the while her radio plays nothing but fine tunes from the late ‘50s, proving she must have been born on the streets of modern-day Louisville. Get out ‘cher wallet, boy..

This may be the oddest documentary ever made; certainly the most self-referential. Tomás Farina is one of the world’s fastest rising stars in the world’s most popular sport: professional Euro-football (“soccer”). His brother, first-time filmmaker Martín Farina, never much of an athlete, wanted to capture what life is like for Tomás, taking his camera into the locker rooms, bars, and even the showers of these athletes who, not surprisingly, had something to say about the intrusion. With a decidedly homoerotic bent, the conflict between the arrogant athletes’ butch, insular world and the plight of we lesser mortal turns this doc on its head in crazy ways.

Britain’s master sleuth, played by the inimitable Martin Shaw (“The Golden Voyage of Sinbad”), continues to confound criminals and cohorts alike as late-60’s social upheavals make the world ever harder to police. Lee Ingleby returns as his younger sidekick, John Bacchus – a man far more in tune with his turbulent time, but self-centered and difficult — who treats his mentor’s confusion as a sign of weakness. This season starts off with one of the best tales of the series, with Gently taking the entire police department to task – and particularly Bacchus – when a prostitute is raped and no one seems to care. Simply put: The best detective show on TV.

A gay romcom about a happy-go-lucky guy (Tyler “Scrubs” Poelle) about to propose to his true love when his true love dumps him for a (gasp!) female. This sets into motion a warm and funny comic search for The Meaning Of Life that is much more entertaining and mainstream than we usually see in this genre, finding universal truths and pitfalls that all adult audiences can relate to. From the director of “Holding Trevor”, now available on Blu-Ray with a great cast including Joel Rush from the “Eating Out” series and sexy-cute Jennifer Elise Cox from “Web Therapy.”

Rosamund Pike, who starred in that simply awful “Gone Girl” – a masterpiece of marketing if there ever was one – plays a too-perfect woman whose life goes down the crapper after accepting a blind date with the wrong guy (Shiloh “Evil Dead” Fernandez). He is instantly sent to prison (yeah, right), but she still can’t seem to get her shiitakes together, so she … goes to visit him in prison! And when he’s quickly released, guess who comes calling at a certain woman’s house? Is it just us, does this all seem rather pandering? With Nick Nolte as her dad, plus Camryn Manheim, Rumer Willis, and Illeana Douglas.

A truly wretched and awful little cop-stinker with grand expectations and a surprising cast of otherwise good actors (many in cameo), some of whom seem completely baffled at what’s going on around them. Lovely Mischa Barton (“The O.C.”), Michael Paré, Marlon “War Of The Worlds” Young, bikini model Aria London, and Jeremy “Mallrats” London scramble around LA to save hostages from terrorist Tom Sizemore (who has no less than 23 movies currently in the works), intent on destroying the entire city. Or something like that. We started a drinking game ten minutes in and don’t remember much after that. Try it yourself.

A cleaned-up Blu-Ray reissue of the 1971 doc on Dennis “Easy Rider” Hopper, filmed while completing his little-remembered magnum opus, “The Last Movie.” Hopper was at is insane, enigmatic best during this period, often stoned and usually rambling on about what he saw as the world’s impending capitulation to corporations, and America’s loss of 60’s enlightenment. We know today that both of these views turned out to be absolutely true, but at the time he just sounded like another full-of-himself drug-addled gasbag. A welcome look back at the man, the career, and a POV that might have been important; no less relevant today.

THERESA IS A MOTHER

Unknown indie Director/Writer/Actress C. Fraser Press stars as a single mother struggling to support her family as a singer/songwriter in NYC. Inevitably, their precarious life comes crashing down, forcing her to do the most demeaning thing that a human being can do: Take the kids and go live with her parents. These particular ‘rents (Edie McClurg and Richard Poe, both faces you’ll recognize from TV) are happy to see the grandkids, yet there’s an obvious distance between the adults; some long-suffered wound that is never mentioned, permeating their every thought. But this isn’t a dark downer-drama! It’s a surprisingly upbeat and life-affirming comedy, bolstered by loads of great music. Recommended.

Brenda “Atonement” Blethyn continues to shine as the somewhat distracted force of nature in this oh-so classy BBC detective series. Set largely in bucolic Northumberland, our feisty old bird has a beak for crime and wings of … er. Oh, hell! She’s a damned good detective, one of the best! But does she get any respect after decades on the job? Nooo. She’s stuck out there, slaving in the trenches for a bunch of disrespectful assholes who don’t care if … Uh, sorry. Just venting. We really need a vacation… Where were we? Oh, yeah: This season starts with a literal bang when arson reveals murder at a vacation park full of wacky-weed. Surprisingly gory at times; these things rawk!

Patrick “Fargo (TV)” Wilson is front and center as a US prosecutor, married to Lena Headey (“Game of Thrones”) and on the fast track to great things when he develops a “zipper problem.” As in “he can’t keep it closed.” The root (snigger) of his ailment is an unbelievably hot young office intern, Dianna “Glee” Agron. To vent his, er, frustration, he visits a high-end (snigger) hooker, and becomes … hooked. Hey! Let’s all watch as his life goes swirling down the porcelain! While this may sound like the basis for a brainless guy-comedy, it’s a supposedly serious drama/thriller with cameos by Ray Winstone, Richard Dreyfuss, and John Cho – and watch for dreamy Penelope Mitchell from “The Vampire Diaries”, and redheaded vixen Elena Satine from “Revenge.”