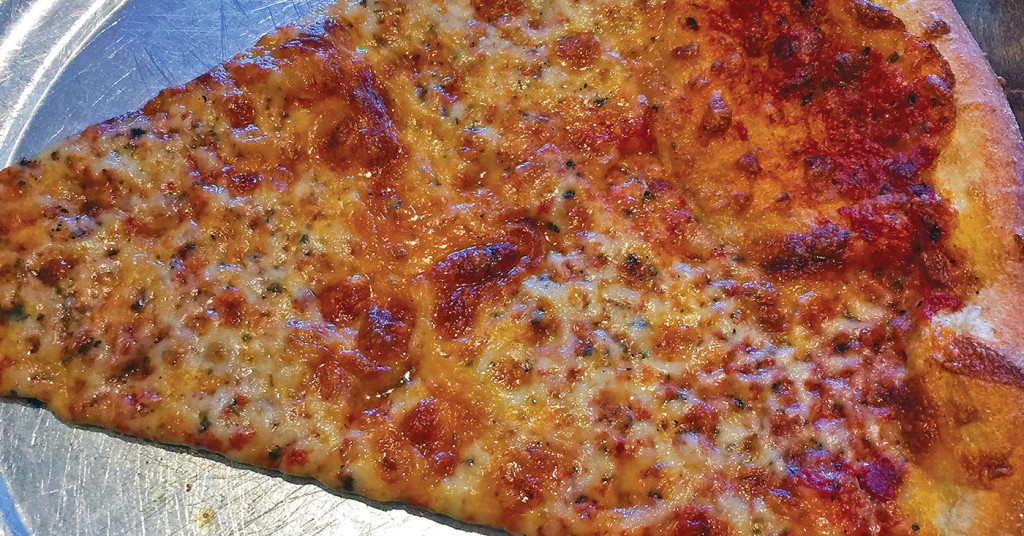 Mary claims that I never met a pizza I didn’t like, but this is a gross exaggeration. Sure, I like pizza, a lot, and I generally won’t say no to a slice. Why should I?

But liking the stuff doesn’t mean that I give up my critical discernment, dammit! Show me a Corporate Pie™ and I’ll shrug and go “Meh.” I know pizza, and I know what I like. And I’m here today to tell you that I like the pizza at The Post, an appropriately hip, casual pizzeria in a shotgun house that was once home to once housed Lone Wolf Post #3593 of the Veterans of Foreign Wars post in Louisville’s Germantown.

Is it the best in town? I didn’t say that. Our fair city is blessed with a lot of really good pizza (and, to be frank, a lot of less-good and even not-so-good pizza). I wouldn’t even want to try to rank The Post against, say, Garage Bar, Caffe Classico, Old School NY or a bunch of other splendid locals.

But I’ll say it’s right up there in the top tier, and shines particularly in the New York City-style pie, that large, thin, foldable slice that you can bend in half to eat out of hand, starting from the point and working back.

We came prepared for a great pizza experience and got it, even after starting off a bit on the wrong foot. When we sat down, we realized that it was as cold as an icebox and as noisy as a rock concert, but without the good music.

Sounds pretty rough, right? But it gets better. The noise died down a bit when the party of 12 at an adjoining table got their food. Stuffing their faces tended to mute their outdoor voices. Once we realized our server, Charlotte, was competent and caring but deeply in the weeds with this noisy group, we were forgiving about a brief delay in getting our menus and drinks. And Mary put her coat on.

The menu is tempting, if pizzeria-basic, focused on a dozen New York-style pizzas in small (12-inch), medium (16-inch) and large (a hulking 20-incher that pretty much covers a table), plus a build-your-own option; and they range in price from $10.95 to $35.95 depending on the pizza’s size and the toppings you choose. If you don’t want a whole pie, you can go for a New York City-style slice, which comes pretty close to a whole pie at some shops. It runs close to a foot from crust to tip, and comes for a laughable $3 (for cheese) to $3.50 or $4 for pepperoni or the slice of the day.

Despite its military heritage, The Post goes light on the military imagery, paying gentle homage to the VFW by way of an American flag on one wall and pizzas named after WWII themes. The Peace Treaty, the Riveter, the Spitfire, the South Pacific, even the bratwurst-loaded Army Brat. Still, the combination of wacky monikers and the ambient noise led to a serious misunderstanding: I tried to order the “Italian Campaign,” a Neapolitan classic better known elsewhere as pizza margherita, a combo of fresh mozz’, tomatoes and basil, evoking the colors of the Italian flag. In the din, our server apparently heard “Italian sub,” eventually delivering a loaf laden with cold cuts and cheese instead. Er, no thanks.

She was mortified, but honestly, it was really my fault for speaking softly in a noisy setting. She insisted on comping me to a couple of hefty giant cheese slices instead. I wasn’t comfortable with that, but she was kind enough to push past that awkward feeling and I gave in, sneakily adding the price of a slice to my tip at the end

It was an excellent pizza, too, thin with a good, crusty Italian-bread crust at the rim, topped appropriately but not excessively with tangy, slightly spicy tomato sauce and a thin coating of melted cheese. Balance is everything in a good New York City pie, and the mountains of excess that make up Louisville’s variation on the Italian-American original don’t really make it better.

A side Caesar salad ($5.45 for a small; large is $8.95) was fine, too, crisp, fresh squares of romaine with a few non-traditional oakleaf lettuce leaves thrown in; grated cheese, tangy Caesar dressing and crisp, herbed croutons. A half-size grilled steak sub ($6.95) was also excellent: Good, crusty bread bore a ration of shredded bits of juicy beef, peppers and onions, a deli slice of provolone, and a little more mayo (or maybe salad dressing) than it really needed to hold it together.

In addition to the comped pizza, we also didn’t get charged for our iced tea and diet cola. As a result, our tab for two was only about $13. I rounded it up to $20, and kind of wished later that I had made it a 10-spot.