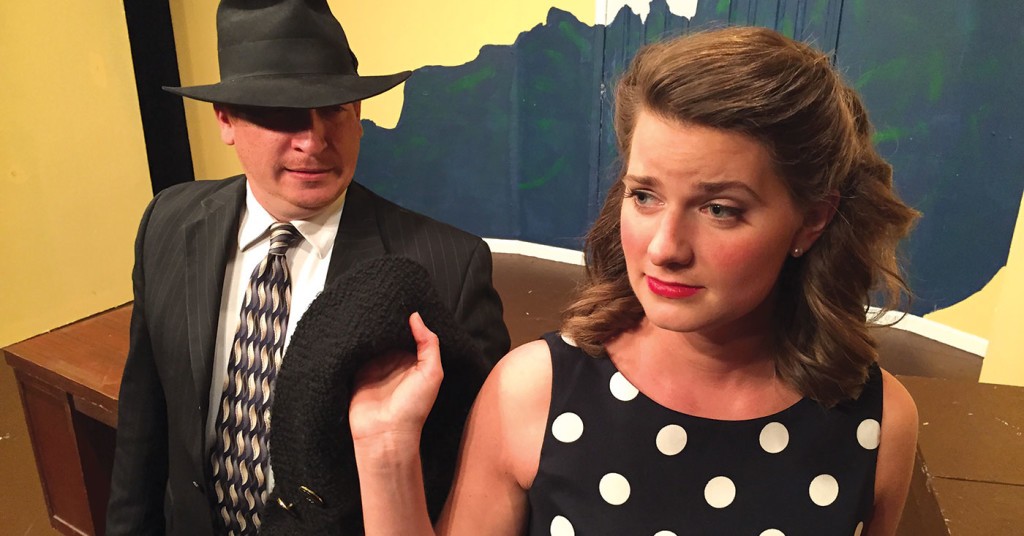 The hardest thing to create on a theater stage is the illusion that the characters are free agents who wield control over their own destinies. It’s a rare thing to pull off in any context, and even rarer when the play is a familiar American classic. And when that classic Arthur Miller’s “The Crucible,” the challenge is compounded by the familiarity of the play’s dramatic context  (the Salem witch trials) and the historical backdrop in which it was written (the McCarthy era investigations of the 1950s), and the vexed politics of our own time.

For many theater-goers, the text of “The Crucible” holds no surprises. And yet, the production that opened last week at Shelby County Community Theatre is a wrenching, suspenseful drama that caught me up in its urgent pulse like no other production ever has. Some directors, I suppose, handle the play with an overwrought reverence because of its place in the canon, its formidable intellectual heft and its powerful political context.

But Director Jack Wann and his cast have plumbed the hearts and souls of these characters, and the outcome is a deeply moving personal drama that pits mostly good — if flawed — people against the implacable system of a theocracy rooted in fear.

The play requires verbal and physical stagecraft of a high order, and the cast delivers throughout (with excellent support from Jennifer Pusateri’s period costumes, ominous sound and lighting from James Ray Morgan, Zach Yates and Phil Hoagland).

The action is precipitated when a group of young girls are discovered dancing by night (perhaps unclothed) in the company of the slave Tituba (in a fiery performance from Freida Vinegar). To evade responsibility, one of the girls (Ruby Seitz) feigns a devil-induced trance, and before long all of the girls have entered into a conspiracy that enraptures the entire community.

Voices of reason (including the wisdom of Rebecca Nurse, played exquisitely by Elaine Hackett) are drowned out by a growing hysteria that’s nurtured by the self-serving town minister (Rick Reinle, who later brings a powerful anguish to his role), and the venal Thomas Putnam (Reggie Van Stockum) and his wife Ann (Cheryl Rankin Van Stockum), who believes that the deaths of her own children must have been caused by witchcraft.

As hysteria envelopes the town, a witchcraft expert (Rev. John Hale, in a complex turn from Chris Wise), arrives and eventually investigations turn into accusations, accusations into arrests and arrests into trials (featuring outstanding performances by Karl Seitz and Corey Hall). The accusations emanate from all the girls (including those played by Kira Pusateri and Stella Hundley) and their ringleader, Abigail Williams (Emmie Deaton).

Abigail’s earlier illicit relationship with John Proctor (Clint Gill) and John’s wounded relationship with his wife Elizabeth (Mia Seitz) is central to the play’s dilemma and this trio of actors is superb — Gill and Seitz in their smoldering anger and, ultimately, steely mutual respect; and Deaton in the play’s most chilling and unsympathetic role. Equally fine, is Kara Holbrook in the key role of the Proctor’s servant girl — who becomes an officer of the court, and whose testimony before the court is a brilliant piece of theater.

This is a production full of vivid performances, including James Ray Morgan, Bruce V. Sherrod and Bill Stover, Sr.

For Louisville theater-goers: this production is well worth the drive to Shelbyville. •

Meanwhile, closer to home, last weekend saw the opening of this year’s “Ten-Tucky Festival of Ten-Minute Plays” at The Bard’s Town Theatre, and it is a delightful collection of eight fast-paced works. It’s a nice mix of comedies and thought-provoking vignettes. Jon Becraft’s “A Dramatic Work Signifying Nothing,” was a droll mash-up of Shakespeare and Seinfeld (oh, those Shakespearian sponge jokes …), directed by Nick Hulstine and featuring a great performance from Tony Smith. Other period send-ups included Andy Epstein’s cleverly done “Film Noir,” directed by Scot Atkinson (with great costumes), and Doug Schutte’s brilliant explication of the source of “Whistler’s Mother,” directed by Amos Dreisbach. A dark, dystopian work environment is the setting for Rebecca Ryland’s “The Interview,” directed by Becky LeCron. A strange twist of fate in heaven’s ante-room is featured in Nancy Gall-Clayton’s “Levels of Living,’ directed by Kathi E. B. Ellis. And the post-apocalyptic discovery of a comic book drives Brian David Walker’s “Hero Worship,” directed by Kelsey Thompson.  Sarah Diamond Burroway’s “It’s Just a Box,” directed by Doug Schutte, is a thought-provoking,  and superbly executed, meditation on a surprisingly rich metaphor. And Gary Wadley’s “Reunion,” directed by Ben Gierhart, is a serious-minded exploration of memory, aging, relationships and hope.  This is a great “Ten-Tucky” year — entertaining and provocative. •