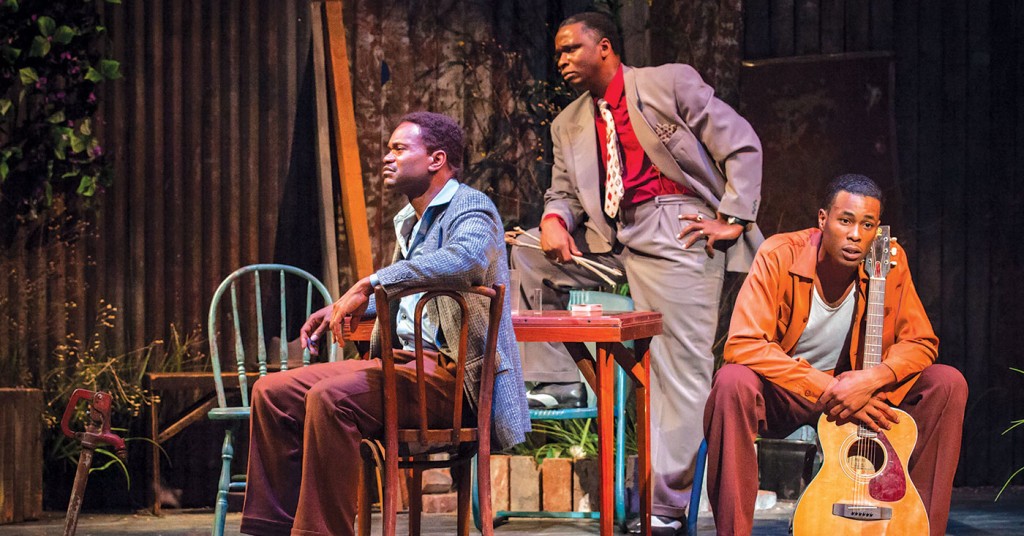 The onstage action of August Wilson’s “Seven Guitars” is set in a scruffy back yard in 1948 in Pittsburgh’s Hill District. In William Boles’ exquisitely detailed design it’s a colorfully run-down collection of crumbling bricks and broken flower pots, bounded by looming wooden fence and a tall brick house with a weathered stoop, and a slanted trapdoor entrance to the cellar.

From a physical standpoint, it’s a yard seemingly isolated from the world (even exits and entrances seem cunningly shielded).

But in a deeper sense, it’s a yard deeply connected to the African-American diaspora. And during the sprawling, loving reveal of the first act, Wilson takes us deeply into the hearts and heads of seven characters whose intersection in this yard will eventually culminate in an act of shocking power.

As is often the case in Wilson’s 10-play “Pittsburgh Cycle,” sound and music are the forces that bring people together, drive events and organize the ideas.

Here, the unifying story at the surface is about a musician. A prelude reveals that musician Floyd “Schoolboy” Barton (J. Alphonse Nicholson) has just died and that his funeral was fraught with mysteries and omens. Then, we move back to an earlier period: Floyd has just been released from jail to find himself on the cusp of fame and fortune. While he was locked up, some recordings he’d made earlier turned into hits, and he has an invitation to record for a major studio — if only he can make his way to Chicago. And if only he can persuade his bandmates, Red (Bowman Wright) and Canewell (Forrest McClendon) to join him on the trip. And if only he can repair his relationship with Vera (Joniece Abbott-Pratt) and persuade her to come along. Where the musicians are feckless and Vera is indecisive, Louise (Sharon Washington) is a strutting, imperious no-nonsense woman with an independent, pragmatic spirit, at least until her voluptuous, flirtatious niece, Ruby (Joaquina Kalukango) comes up from Alabama to escape a scandal. And always puttering, singing and philosophizing, there’s the strange and wonderful Hedley (Harold Surratt).

But although Floyd’s story serves as the main theme, Wilson’s storytelling was shaped by the polyphonic improvisations of early New Orleans and Chicago jazz, where the joys are found in the florid variations. As a storyteller, Wilson reveled in the digressive anecdote. His dialogue is infused with the riffs and pulse of the blues. And his dramatic imagination has a grand, mythic sweep.

It’s all those tangled, overlapping impulses that make Seven Guitars such rich work, and the challenge for a director and company is to discover a coherent center. Happily, director Colman Domingo and his cast have done just that. This is a lengthy play — total running time, counting intermission, is nearly three hours. But there’s such an urgency to every scene that the time barely registers until you look up and it’s over.

Some of the pleasures are momentary, like a comic episode when the crowing of a neighbor’s rooster inspires Canewell to deliver a droll lecture on the regional psychology of roosters: “That’s one of them Alabama roosters. See, he fall in love with the way he sound and want to crow about everything. Every time the notion strike him. That don’t do nothing but get people confused. That kind of rooster ain’t no good for nobody. Best thing you can do is try and make a stew out of him.” And then reveals that roosters completely stopped crowing during the period of American slavery, resuming only with the Emancipation Proclamation — and it’s in celebration of that, that they now crow so loudly.

There are dark and unsettling moments, as when Hedley reveals that his first name is King — in memory of “King” Buddy Bolden, the legendary New Orleans cornetist. But he never uses his name because of an incident in the past when he killed a man: “He would not call me King. He laughed to think a black man could be King. I did not want to lose my name, so I told him to call me the name my father gave me, and he laugh. He would not call me King, and I beat him hard with a stick. That is what cost me my time with a woman. After that I don’t tell nobody my name is King. It is a bad thing. Everybody say Hedley crazy cause he black. Because he know the place of the black man is not at the foot of the white man’s boot. Maybe it is not all right in my head sometimes. Because I don’t like the world. I don’t like what I see from the people. The people is too small. I always want to be a big man. Like Jesus Christ was a big man.”

There are moments of sheer musical joy — as when Floyd grabs his guitar and an ad hoc jam session breaks out that finds Canewell playing the harmonica, Red using everything in sight as a drum surface, and Hedley on the spur of the moment building himself a washtub bass so he can join in. There are exuberant displays of communal joy (as when a radio broadcast of Joe Louis’s victory over Billy Conn inspires a collective dance). There are sweet and surprising moments of generosity — spiritual and sensual.

All of this is delivered in a beautifully crafted production that features extraordinary costumes (Kara Harmon), carefully crafted sound (Christian Frederickson), fine music (Jon Spurney) and evocative lighting from Kathy A. Perkins, whose work creates a stunning frame for the climactic scene.