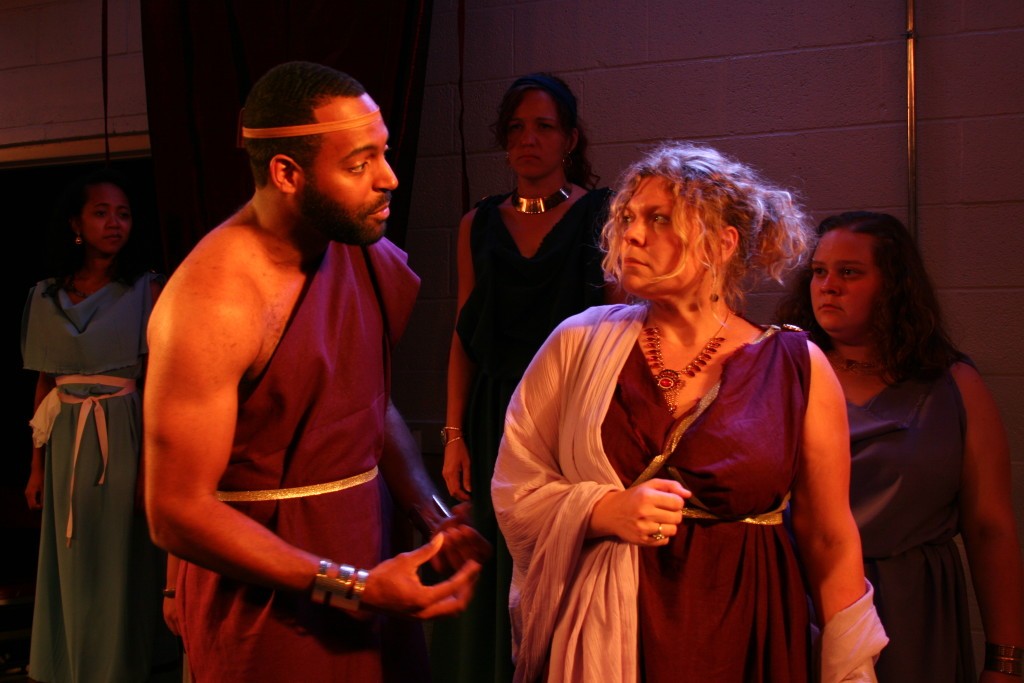 But when company founder, and driving force, J. Barrett Cooper announced he had been offered a job in California, the loose-knit collection of actors and directors had to decide the fate of the company.

After a truncated season of transition under interim artistic director Kelly Moore, the company is ready to embark on its first full season under the leadership of Moore, officially in charge as new AD.

For fledgling companies, when their original leadership exits the stage, there is often one big question: Can we continue?

“I think there was some concern,” said Moore. “But there are so many people who have been involved with Savage Rose and immediately banded together and said, ‘We do not want this to go away.’”

Savage Rose’s first play under this reign is “Medea,” a Greek tragedy that director Rachel Vidal says most people misinterpret.

“When you see posters of Medea, you see her rending her breast, you see blood,” (SPOILER ALERT FOR 2400 year old play) “’cause she just killed her family,” said Vidal.

She compares these images to those associated with another famous tragedy: “You don’t see posters of “Hamlet” with everybody dead but Horatio and Fortinbras.”

“That’s the last fifteen minutes of the play,” said Vidal, referring to both “Hamlet” and “Medea.” While many focus on the revenge, Vidal contends that revenge is simply what happens at the end of “Medea,” not what the play is about.

It’s about a woman choosing her own fate. “So much of greek theatre is about fate,” Vidal said. “This is predestined and you are going do what the gods have decided or what the oracle has spoken. That’s what’s going to happen.”

But not Medea. She makes her own decisions, an act with thematic significance underlined by the play’s end. “She got away with out punishment,”  said Vidal.

“Deus ex machina” literally translates to “god in the machine.” These days we generally use that phrase to mean an end to a play, or movie, or TV show that comes out of nowhere. But back in the day, it was an actual thing, a complex mechanical device in which the actor playing a Greek god would be lowered onto the stage. He’d deliver the fate of the characters, because he (or she, I don’t want to slight Hera) was a god, and Greek plays were all about fate and hubris.

But after making her own fate, Medea climbs into the deus ex machina, and flies away.

And, boy, did it piss off Greek audiences at the time. A woman? Choosing her fate? It was literally sacrilege.

Moore says that playwright Euripides “was known for being a forward thinking, subversive writer for his time.”

But Greek audiences had a way to show their displeasure. Most Greek theater premiered in religious festivals, as part of a competition. Audiences would vote for the “best” play.

“Medea” originally came in third. Out of three. “But ‘Medea’ is the most often produced Greek tragedy,’ said Vidal.  Moore added, “so a couple thousand years later … ha ha.”

This story of a woman choosing her own fate has a particular significance to the new Savage Rose.

“Interestingly, it has ended up, not through any purposeful effort, that it’s all women right now. All of our administrative people and everyone on our board. ”

Moore says this wasn’t a choice, just the way things shook out, but with all this talk of fate, and women making their own choices, it’s easy to read significance into that fact.

As these women grab their fate and forge ahead, you can expect them continue to bring classical works to the fore, but there will be some changes.

For years Savage Rose has made its home at Walden Theatre, for rehearsals and performances, presumably due in part to Cooper’s association with both companies. Savage Rose will now be performing in other venues, like The Vault, where they are staging “Medea.”

They are also focusing less on the Bard. “We’re moving away from doing Shakespeare on a regular basis. Kentucky Shakespeare is rocking it now,” said Moore. “They are back to giving everybody three or four shows a year now.”

Savage Rose will offer two fully staged classic or classical works a year, and several readings of underproduced works from the cannon. These readings give actors and audiences a chance to get even further off the beaten path, and experience edifying but forgotten gems from theater’s history.