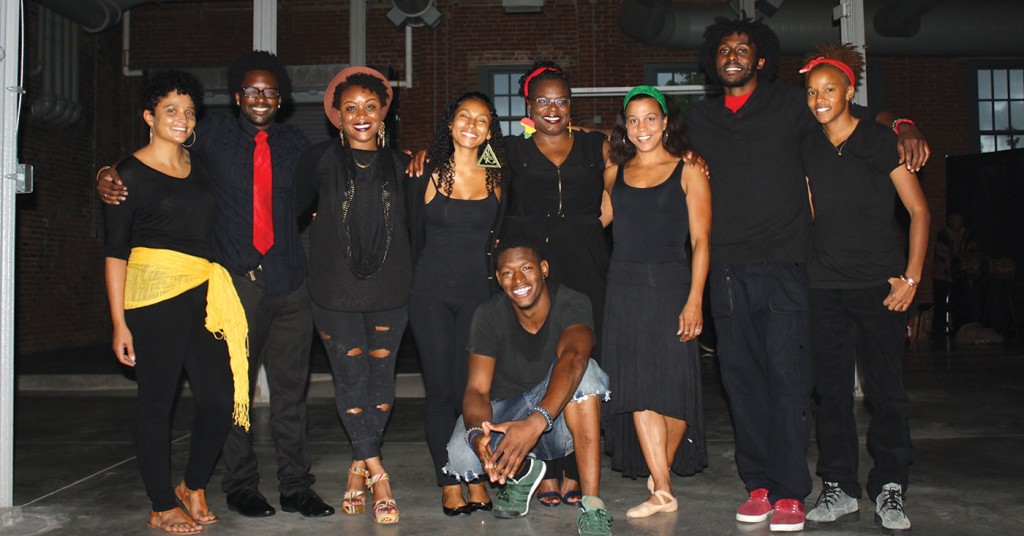 African American arts group Roots and Wings made headlines last spring when they snagged a $280,000 grant from Art Place America.

The grant focused on creative place-making, and the idea that art and artists can change the fabric of their communities in sustainable and lasting ways.

Under the leadership of co-directors Stacy Bailey-Ndiaye of Bridge Kids International and Theo Edmonds of IDEAS, the artists who make up Roots and Wings will spend the next 18 months using the grant to grow their fledgling group in a variety of ways, and to attempt to make real and lasting changes in the West End.

This past summer, they undertook a series of trainings and teamwork-building workshops aimed at taking this group, made almost entirely of self-propelled soloists who are still learning to work in an ensemble, and forging them into a team. The sentiments shared by every artist in the project who was interviewed for this story suggest that this team is quickly becoming something much closer to a family.

The group is about to embark on the second stage of their activities utilizing the Art Place America grant as they prepare to break into teams of two and lead six months worth of workshops and artistic trainings in some of Louisville’s most challenged neighborhoods.

In a series of interviews, LEO spoke with co-director Bailey-Ndiaye, and three of ten of the artists from the group, including poet Robin Garner, Jerron Jones (who operates as DJ Nerddboi) and dancer Antonio Burroughs.

Come Oct. 1, their neighborhood work begins. The group will take their poetry, dance, music and DJing skills to community centers in Louisville’s Zones of Hope: the Newburg, Russell, Parkland, Shawnee and California neighborhoods.

Roots and Wings’ growth has brought outreach, teaching and community organizing to the forefront of their efforts, but they began as performers.

Their origins lay in the Smoketown revitalization efforts and the West End slam poetry scene.

Lance Newman was navigating the West End slam scene as a poet, a personality and a driving force. He operates under the name Mr. Spreadlove and runs one of the biggest ongoing poetry slams on the first Tuesday of each month.

The two were introduced by Mayor Greg Fischer and began working together on a series of poetry-driven events that led to the creation of The Smoketown Poetry Opera, where the group that would become Roots and Wings came together for the first time, a group that dancer Antonio Burroughs calls a “Justice League of artists.”

A combination of narrative poems telling the history of a community and addressing social issues, The Smoketown Poetry Opera included music, dance, DJing and video projections. It came to resemble a choreo-poem more than a traditional opera or play.

While some group pieces and duets were included, much of the work was solo performance, influenced no doubt by the fact that these artists are used to working alone.

The Smoketown Poetry Opera was meant to be a stand alone event, and the artists involved initially planned to disband after its completion. But the performance made lasting impressions on the participants, the audience, Theo Edmonds and Stacey Bailey-Ndiaye, whose work with Bridge Kids international had brought her to work in the creative innovation zone.

Bailey-Ndiaye recalls Edmonds reaching out to her to ask, “So you want to help incubate this group?”

They decided to handle administrative duties and use their development skills to find grants to pay the artists. The two invited the artists to a meeting.

“We brought them all together and asked them what they thought,” said Bailey-Ndiaye. “They said, ‘Whether or not we get a grant, we want to do this.’”

After initial grant applications were filed, the group received word that they were up for the sizable Art Place America grant. While they waited, they scaled up their success from Smoketown and created and performed The West End Poetry Opera at the Kentucky Center for The Arts. The work moved its focus to the other side of the 9th-Street divide and incorporated themes and ideas permeating the Black Lives Matter movement.

The group is made of fierce individuals. With a few exceptions, these poets and dancers are used to working solo. In the Poetry Opera, they often still do. While Newman and others occasionally offer leadership, the group uses consensus to make artistic decisions. No one seems to have final say, not even Bailey-Ndiaye or Edmonds. This can cause conflict.

“You’re talking about individuals who have been working on their own. and you want to bring them together with this collective identity. They have their own brands,” said Bailey-Ndiaye. “That’s a lot you have to sift through.”

Roots and Wings isn’t just about paying artists to make art. It’s about training a group of artists to be community leaders.

DJ Nerddboi, sees a difficulty in getting a community involved in a creative endeavor.  “The thing is, man, you got to go to them, and sometimes you got to pull them by the collar and say, ‘C’mon, it’s going to benefit you.’”

Bailey-Ndiaye also sees this challenge, and added, “That’s where the community organizing comes in.”

You won’t see Roots and Wings in performance again as a full group until after their work in the Zones of Hope community centers, which includes free classes that help participants create and perform their own art.

Plans for the group after their time in the community centers are still being written, but it certainly includes a grand new performance that will expand the stories being told, and the group hopes to include many new performing talents that they hope to uncover in the community outreach.

And after that, who knows?

The group has strong roots. Now it’s time to see if they can grow those wings.

Robin Garner has been writing since childhood, though an early love of romance novels delayed her entry into the poetry world. In seventh grade, she wrote a romance novel, “Playa’s Ball,” that got her noticed by teachers when it began circulating among the other kids at school.

Despite several interventions by teachers and a natural talent for writing, Garner struggled in school, dropping out at age 16 after becoming pregnant.

The next several years were rocky. Garner had two kids and worked a variety of minimum wage jobs to cover the basics.

‘’It got bad. Me, my daughter was about four, my son was a baby, we were living off Broadway in the West End, in what I can call a crack house now.”

But through it all, Garner never stopped writing.

“I know it sounds cliché,” says Garner as she discusses the poems she wrote during that time. “I have pieces of poetry with ink stains from tears.”

With some government assistance, Garner turned it around and now works in health care.

But after writing a new, more reflective piece for an event called ‘’Black Girls Rock,” Garner turned her eye towards less sexual fare.

Now her poetry addresses being a parent of a black child in a racist society, sexual assault and other difficult issues she has faced.

Jerron Jones started working on his doctorate a couple weeks ago. There’s a reason his handle is DJ Nerddboi.

“I DJ as a side hustle. My main job is behavioral therapy for kids with autism, mood disorder, bi-polar disorder. My job is to teach parents and teachers techniques.”

He’ll no doubt bring those skills to the table when he’s working in the Zones of Hope for the next six months.

During his undergrad at Lindsey Wilson, DJ Nerddboi started throwing house parties once a month, charging five bucks a head at the door. At first he had to pay a DJ, but started spinning himself after he got his first degree. “I called my homie, like, ‘Hey, how do I DJ?’ From the money I made, I just saved up, started putting stuff on layaway.”

He says he frequently sees people in the African American community ashamed, afraid or too proud to ask for help.

“I went there, and there were these people outside, doing poetry,” recalls Burroughs. “The rhythm and the vibe that I got when I walked up on them was magical.”

“I was like, ‘I’m a dancer.’” Hannah Drake, one of the poets, asked Burroughs to improv to her poem. Burroughs says this moment of acceptance made him open up. “I feel like they want the raw me.”

Throughout his childhood, Burroughs was shipped back and forth from school to school, sometimes splitting time between his mom’s house and the home of his absentee father in Tennessee.

The frequent departures left a mark on him. “People know me as the person who is going to up and leave you,” said Burroughs, no doubt remembering someone he left behind. Then he looks up. “I’m going to stick this out, really put my all in this. We all are. We’re gonna stick it out and see where it goes.”

At various points in our conversation, it seemed like the kinetic energy contained in Burroughs’ lean frame might burst out. He managed to hold it in, but when our interview concluded and we stepped outside into the Old Louisville night air he couldn’t hold it in anymore.

In the illumination of a single streetlight he danced, showing the rawness that he sees as essential to his being.