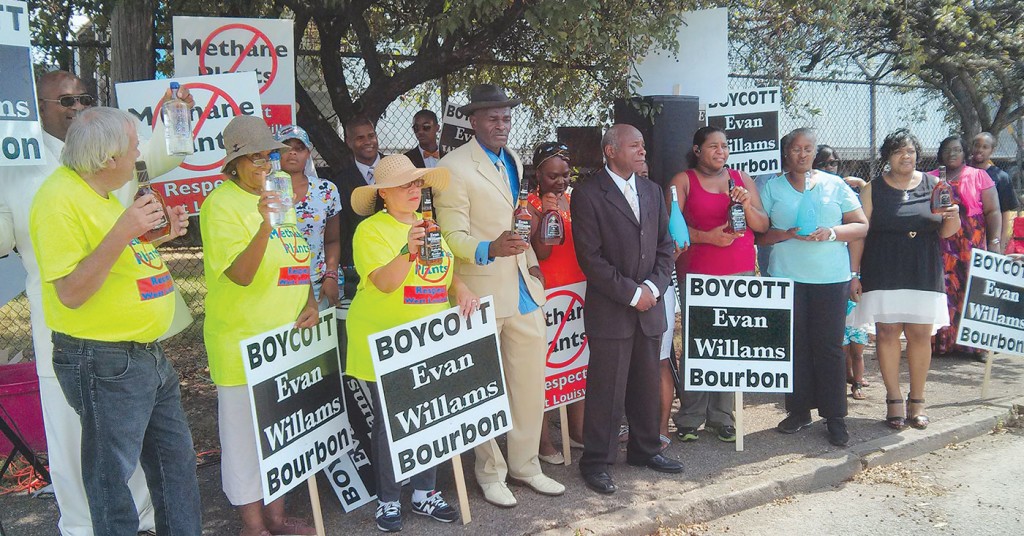 Taking inspiration from the Boston Tea Party of 1773, activists from West Louisville came together on Sunday, Sept. 6, to pour out a couple hundred dollars worth of Evan Williams’ whiskey in protest of the proposed anaerobic digesters set to be built at the Heaven Hill Distilleries on 17th and Maple Streets.

Organizer Ray Barker from STOMP (Standing Together Opposing Methane Plants) stood with about 30 activists, pastors and concerned citizens to ask everyone in Louisville to boycott the sale of Evan Williams products until they agree to meet with community leaders and discuss this controversial project.

“We hope that this act of defiance will get the attention of Evan Williams and the city,” said Barker, “because we are consumers, and as consumers, we have real power. So Evan Williams better listen up, or they will have a much bigger problem on their hands.”

The proposed anaerobic digesters will recycle Heaven Hill Distilleries’ food waste and capture the resulting methane gas for use as fuel. And according to Nature’s Methane (the company behind the project) the only byproducts created will be compost and wastewater. But according to Barker, only 60 percent of the food waste needed will be provided by Heaven Hill, while the other 40 percent of food waste will have to be trucked into West Louisville.

Many in West Louisville worry that not only will these digesters bring increased traffic and decreased air quality to West Louisville, but that these airtight methane tanks will be potentially hazardous to an area with a history of gun violence. Especially for the children of nearby Roosevelt-Perry and Wheatley elementary schools, which are both less than five blocks away from the proposed site.

“They’re not trying to build this plant next to Trinity, or St. X,” said Jerald Muhammad from the Nation of Islam. “They’re trying to dump it in West Louisville. And we don’t know the long-term effects that these methane plants will have on these children whose lungs have not fully developed yet.”

Protestors were successful in having another proposed anaerobic digester removed from the West Louisville FoodPort plans, but despite the community’s outrage, Evan Williams, along with Mayor Greg Fischer, has been standing strong behind the Heaven Hill digesters, touting them as a green initiative for the city.

“Does the mayor need an interpreter?” said Kathleen Parks from the Kentucky Alliance Against Racist and Political Repression. “We do not want any methane plants in West Louisville. […] This is another case of white privilege, with people dictating to an urban community what they want, instead of asking what they need.”

At the time of the protest Barker said that he was able to speak with Mayor Fischer on the phone, and that he was “headed in the right direction.”

“[Mayor Fischer] wants to enter into a dialogue with this community about this project because he understands that West Louisville has experienced environmental racism before,” said Barker. “And right now the way they are doing this is down right disrespectful, and it leads to feelings of mistrust from the community.”

But Parks and other protesters were very clear in their stance and seem to only want one outcome.

Parks said she feared that if one anaerobic digester was allowed to be built in West Louisville, that the plans for the FoodPort digester could be revived, or worse, that Nature’s Methane could look into expanding into other West Louisville neighborhoods.