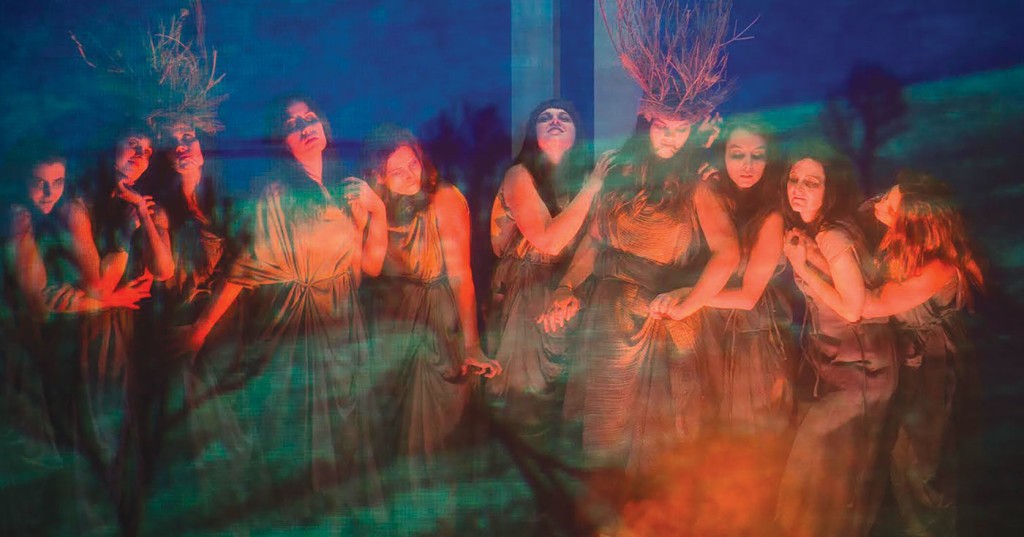 This weekend the Kentucky Opera opens its 64th season with “Macbeth.” This new and engaging production comes at the same time as announcements about the future of the Opera, which is appointing new leadership from within, while still reeling from the tragic loss of General Director David Roth, who died unexpectedly in July.

“Macbeth” is the only classical work in the Opera’s season. Originally composed by Giuseppe Verdi in 1847, the story closely follows Shakespeare’s play. It’s known for marking the end of his early period, and the beginning of his lauded middle period.

“It’s not your traditional ‘Macbeth,’” promises Mechavich. “It’s updated. There are amazing visual elements, projections that are animated, that are choreographed with the drama to add a 21st century element to the stage.”

This production was designed and created by Canada’s Pacific Opera Victoria. In addition to their sets and projections, Kentucky Opera will also use that production’s leads, as Gregory Dahl (Macbeth) and Lyne Fortin (Lady Macbeth) reprise their roles. “They have this energy, this electricity between them, and they bring that electricity and that partnership to our stage,” said Mechavich.

Mechavich calls the witches of “Macbeth” a third lead in Verdi’s libretto. While the composer mainly stayed close to Shakespeare’s original work, he expanded the three weird sisters to three groups of witches, a chorus of 15 women. “Verdi was very insistent that it was a very angular sound, a scary sound and ugly sound, a vulgar sound to mimic the text.”

“Macbeth” is an ideal jumping on point for opera noobs. In addition to this updated production, audiences are familiar with the basic story of “Macbeth.” While supertitles will offer the audience translations throughout the action, many are already familiar with the duplicitous Thane of Cawdor and the conniving Lady Macbeth.

In a great bit of arts scene synergy, Louisvillians had a chance to brush up on the action and watch the excellent Kentucky Shakespeare present their version of “the Scottish Play” this summer.

When asked how he planned to carry on Roth’s artistic legacy at the Opera, Mechavich spoke of Roth’s passion for bringing drama and action to the stage. “He was always married to getting away from opera being this idea of park and bark where singers don’t act, they just sing, and it becomes static,” said Mechavich, who adds that Roth was committed “to bringing theater, movement and drama to the stage.” Mechavich believes it’s his duty to continue that commitment, “and I see that as a wonderful honor,” he said.

After those words of praise for his longtime collaborator and artistic partner, Mechavich passed the baton to Blodgett, who talked about the Opera’s new leadership structure.

“Out of every challenge comes opportunity,” Blodgett began.  “We’re announcing a leadership team.” Blodgett began by discussing Mechavich’s expanded role.  “Joe is becoming our artistic director. That’s more than a principal conductor, that’s the guy that plans the seasons and gets the talent.”

Blodgett says, “That leadership team is taking over. As board chair, I will remain acting director, but only when they need a decision. These are the subject matter experts, and they are David’s chosen leadership team.” He adds that the board is confident that this team can steer the ship for as long as they need to, but indicates it will be a full year at the very least.

“At the same time,” said Blodgett “the board has put together a committee of past presidents and a couple of other directors to sit back, take a deep breath and say, ‘What do we want to look like in the next chapter?”

Blodgett says that a single person, like Roth, who is equally canny on the artistic side and the business is a great leadership model if you have the right person, “but sometimes those unicorns are hard to find.”

At the start of an exciting season, which includes opera superstar Denyce Graves, the Opera and its fans continue to say goodbye to Roth with the bittersweet conciliation of knowing that he planned this season. In his tenure, Roth set Kentucky Opera on a path that continues to move into the future, even if he can no longer be at the head of the ship.