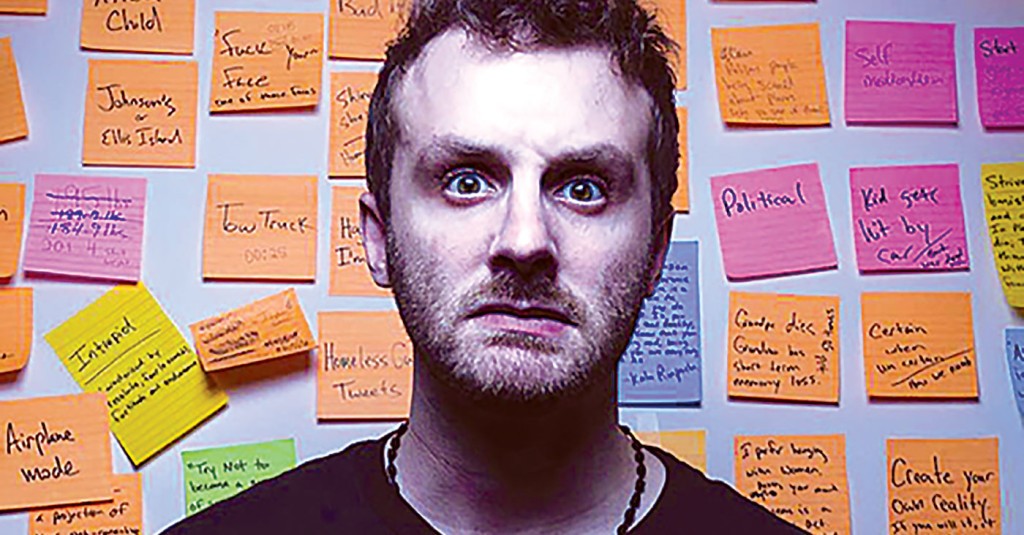 Nicholas Anthony is a creative explosion of both talent and personality, a man who once, sitting in a bar, drunkenly explained his “Plan B” theory to me as, “There is no Plan B. You take the boat to the island you want to reach … and then you burn the boat.” The Minneapolis-born-and-raised comedian, lived here in Louisville for a few years before moving out to his current base in Los Angeles. He has released an album called “Professional Child” (which, in the spirit of full disclosure, did thank me in the liner notes) and is working as a writer on the upcoming CBS series “The Inspectors.” We caught up as he was preparing to return to Louisville this weekend.

LEO: So you’re writing a network television show this season?

Nicholas Anthony: Yeah, it’s been a crazy summer. I get to act for the show, too, which is called “The Inspectors” and is coming out on CBS in the fall.

NA: Yeah, I play a homeless guy in one of the episodes, I actually ended up being eligible for (Screen Actors Guild) because of it. It’s kind of a crazy story. We shot the show in Charleston, South Carolina, and it was right after that shooting that happened. Like as I was flying in, Obama was flying in, and I wasn’t really sure how the city was going to respond. But the night I got there, I was just sitting around and had idle hands, so I put the gear on that I’d be wearing for the show and went to downtown Charleston as homeless guy. It was a very intense, surreal moment.

LEO: Is stand-up on your back burner as far as your career goes?

NA: No, I mean it’s not what it once was, but I have still have a lot of goals I want to accomplish in stand-up before I leave it.

LEO: Your debut album, “Professional Child,” was released in 2012. Can we expect another album sometime soon?

NA: Well, that’s one of my goals. I want to get a second album out, and that’s the material I’m working on now. It’s definitely gotten more specific, more vulnerable, and talks more about me. I feel like it’s maturing, but I’m still in the process. Being in Los Angeles I’m on shows with some of the best comics in the country, guys like Jimmy Pardo or Pete Holmes, and I want to have a good set following those guys having great sets, and I don’t feel like I’m even close to there yet. But every day I work a little harder to get a little better.

LEO: Do you miss living in Louisville?

NA: I’m super excited to get back — I love Louisville. The food is great — that place that had blackberry chocolate ice cream. So many awesome restaurants, and even places like Zanzabar, little venues like that. I really want to take a bourbon tour while I’m there, too. I didn’t really start drinking bourbon until I got to L.A., and now every time it comes up I’m like, ‘Oh, yeah, I lived in Louisville,’ like I have some kind of authority.