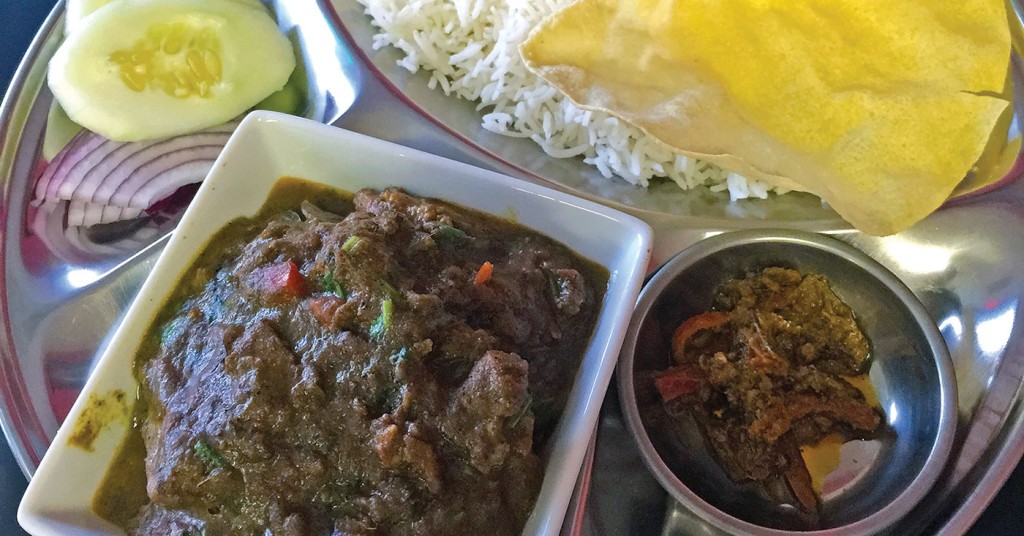 Our friend Ashley just came to town recently, from Alabama by way of 10 years in New York City. A savvy foodie with a love for ethnic eats and a proud adoptive Brooklynite, she came to Louisville expecting great regional fare, but worried that her new hometown might be a culinary purgatory when it came to world cuisine.

It didn’t take her long to get over that. Louisville’s dining scene is no secret, so she expected great farm-to-table cuisine, craft beer and cocktails, and solid bourbon menus. “But it wasn’t until I moved here that I learned how diverse Louisville’s population is and, as a consequence, just how wide ranging and terrific the ethnic restaurant scene is.”

So her eyes and taste buds were opening fast. And then the other night we took her to Mt. Everest View, a Buechel storefront that’s been firing up some startling good Nepali cuisine since it opened July 15.

Yes, you heard that right: Nepal, “The Rooftop of the World,” sprawled across the face of the Himalayas (and, sadly, epicenter of a recent terrible earthquake) is represented in Louisville’s food community now.

“Frankly,” Ashley exulted after dinner, all full of momos and thukpa and raasu ra bhat, “it was a sight better than [the East Village’s] Cafe Himalaya.”

Mary and I agreed. This little spot in the mini-United Nations along Buechel’s Old Bardstown Road is now on my “highly recommended” list.

Like many ethnic storefronts, from Vietnam Kitchen to El Molcajete and beyond, it’s not long on fancy decor, yet it’s clean, bright and inviting, with dark-red walls, colorful travel posters from Nepal and India, and the obligatory big-screen television tuned to ethnic music videos. (There’s also a Nepali-and-more grocery next door.)

More to the point, like those other ethnic landmarks listed, the food and its preparation go beyond the ordinary. To ring my chimes, a chef — despite his or her nationality — needs to show me an understanding of aroma, taste and texture and the skills to put those things together in balance. Whoever’s doing the cooking at Mt. Everest View scores on all those points.

The menu includes a page of Indian standards, too, but please do add some Nepali selections to your bucket list. You won’t be sorry.  It’s affordable, too, with about 20 Nepali dishes ranging from $3.95 (for a fat, juicy grilled pork rib) to just over $10 (for a pork or grilled shrimp platter).

We started with shared rounds of charpate ($2, $3 or $5 depending on size), an intriguing, addictive appetizer that bears a slight resemblance to Indian chaat. It looks something like fried rice, but it sure doesn’t taste like fried rice!

A startling blend of textures varying from luscious soft to crispy-crackly; elusive aromatics singing four-part harmony … we couldn’t make out everything in the complex dish, but the menu listed “puffed” rice, chopped potatoes, onion, cucumber and cilantro, chickpeas, red and green chiles and lime juice. We asked for “medium” spice and got a good warmth, although both Ashley and I could have stood a heavier chili hit. Still, Ashley said, “I could eat a bowl of it for breakfast every day with a dollop of yogurt. For reals.”

And that was just the start. Veggie momo dumplings — a dish that Nepal and Tibet share — were simple looking but subtly flavored, finely chopped cabbage, onions and maybe green peppers stuffed into 10 fat wonton purses, steamed, then neatly arranged around a bowl of cumin-scented sauce.

The hits just kept on coming:

The aforementioned pork rib, cheapest item on the menu at $3.99, would have been a bargain at three times the price. A dry rub of citrus and chili made a bright flavor contrast with the deeply flavored meat. “Man, that was a good hunk of meat,” Mary said. “I hope to gnaw on it the rest of the week!” Ashley agreed: “I was really surprised to see so much pork on the menu, and to see such a gorgeously prepared pork rib show up on the table. I’m from Alabama. We take pork seriously, yo.”

Thukpa ($4.95) reminded me a bit of Vietnamese pho: Veggie bites and other good things swam with wheat noodles in a rich, deeply scented, spicy broth. Chicken raasu ra bhat ($9.99) was a curry-like boneless chicken dish in a thick, well-seasoned, not-too-fiery sauce, served with basmati rice. Ashley nailed it: “Overall the dish was fine. I’d order it again. But I think it paled in comparison to the other items we had. Which is pretty cool, right? The most lackluster thing we ate was still better than average.”

Mt. Everest View: Way better than average. Make the trek out to Bardstown Road. You won’t be sorry.

A filling dinner for three came to a surprisingly affordable $32.73. We didn’t fret about percentages but simply rounded up to $40 to give our friendly, cordial server an appropriate tip.