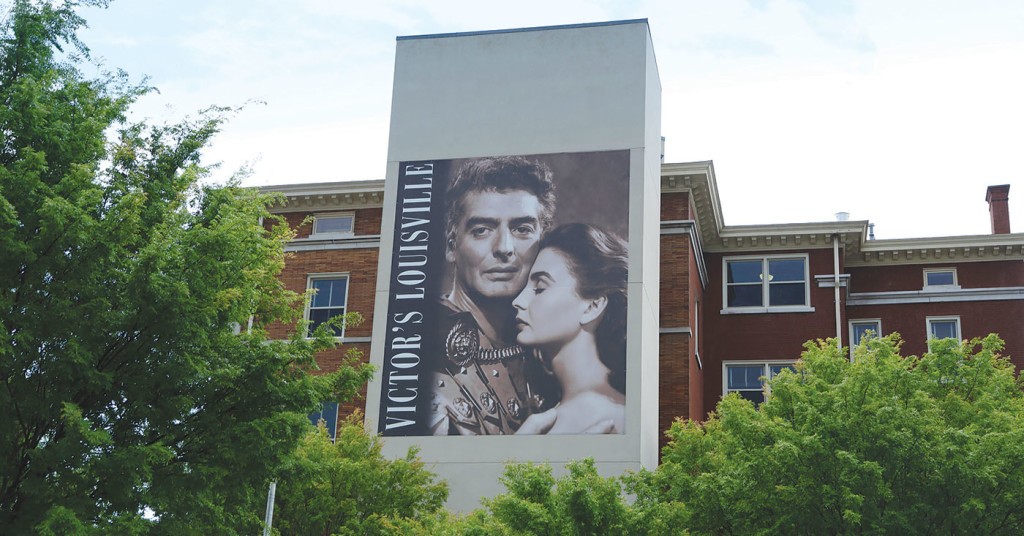 Louisville is fortunate that it produces a prominent movie or TV actor every generation or so. Jennifer Lawrence, of course, is our current lady-of-the-screen. Silent film/stage actress Mary Anderson (Navarro) was our shining star at the beginning of the 20th century. In between the decades there have been other notables such as Irene Dunne, Ned Beatty and the Cruise/Mapother cousins.

In the 1940s-50s, Louisville’s matinee idol was Victor Mature.

Born Victor John Mature in 1913, he grew up in the Shelby Park area. Although his family name started out as Maturi, it was Americanized to Mature in the late 1800s. So, as luck would have it, he was born with a name perfectly suited for the marquee.

Standing at 6-foot-2, with a broad chest and chiseled face, Mature heard Hollywood’s siren song. He later said, “I was never that crazy about acting. I had a compulsion to earn money, not to act. So I worked as an actor until I could afford to retire. I wanted to quit while I could still enjoy life.”

He moved to Pasadena, California, in the early 1930s to study at the Pasadena Community Playhouse. Plays and B-movies are what sustained him during his early acting years. His first leading role was “One Million B.C.” in 1940.

After a stint in the Coast Guard during World War II, Mature started getting top parts in good films, including “My Darling Clementine,” “Samson and Delilah” and “The Robe.”

He played Doc Holliday in the 1946 John Ford film “My Darling Clementine.” Darryl F. Zanuck, head of 20th Century Fox, told Ford, “Personally, I think the guy has been one of the most underrated performers in Hollywood. The public is crazy about him. … A part like Doc Holliday will be sensational for him.”

Mature was indeed popular and busy (he was married five times). He was darn good at beefcake, usually in some sort of biblical epic, like “Samson and Delilah” in 1949 and “The Robe” in 1953. He said he was cast in these parts because he could “make with the holy look.” Probably the best line about “Samson and Delilah” came from comedian Groucho Marx, who said he wouldn’t go see it because “the leading man’s tits are bigger than the leading lady’s.”

He was modest about his acting skills, stating, “Actually, I am a golfer. That is my real occupation. I never was an actor. Ask anybody, particularly the critics.” That love of golf brought him back to Louisville many times for the Foster Brooks Pro Celebrity golf tournament (now called “Just Fore Kids”) benefiting Kosair Charities.

“The Hunk,” as he was known, worked in over 70 movies and received a star on the Hollywood Walk of Fame in 1960. He was semi-retired for years, then made it official in 1984.

Mature died of leukemia on Aug. 4, 1999, and is buried in the family plot at St. Michael Cemetery in Louisville.

Thanks to the Shelby Park Neighborhood Association, the “Hometown Hero” program of the Greater Louisville Pride Foundation celebrated Mature with a banner in 2013, 100 years after his birth. The mural, featuring Mature and Jean Simmons from “The Robe,” is on the Derby Dental Building at 1303 S. Shelby St.