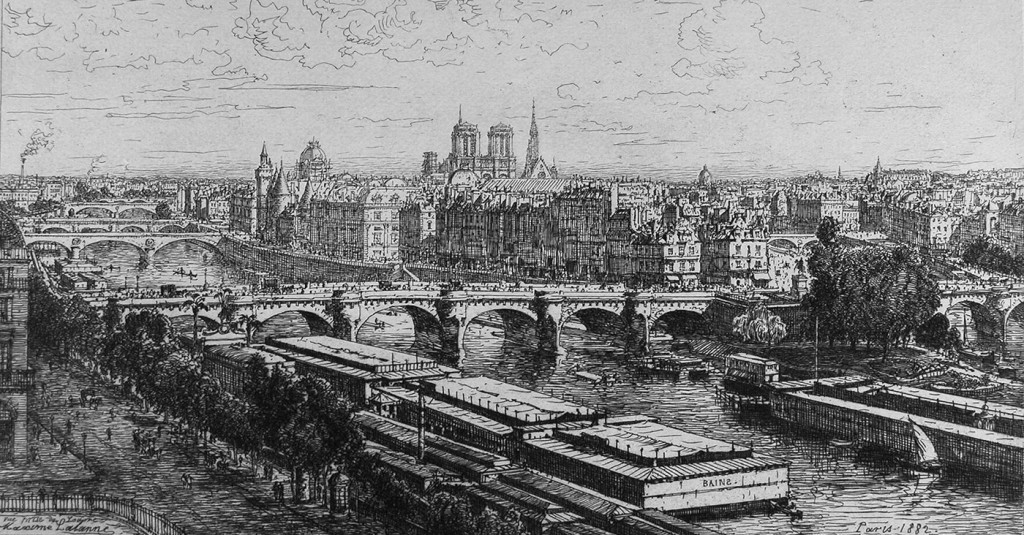 'View from the Louvre' by Maxime Lalanne

There are many reasons to see an art exhibition. For example, an artist is one of your favorites, such as Frida Kahlo. The subject appeals to you, like teapots or portraits. Or it could be a historic time period of interest, covering years of art and culture.

Go see the Speed Art Museum’s latest exhibition, “From City to Country: 19th-Century French Prints,” for the medium. Etching is front and center, showcasing the creativity and difficulty of this printmaking technique. The two artists featured are Maxime Lalanne and Adolphe Appian. Through them, viewers are taken on a journey around Paris out into the countryside.

Etching is a laborious printmaking process that uses acid to create lines on a metal plate. The first major step is coating the plate with an acid-resistant wax called the ground. The artist then uses a sharp stylus to draw the image, removing some of the ground and scratching the metal below. When the acid is introduced, it is repelled by the ground but eats away at the exposed areas, revealing the image on the metal. After the ground is wiped off, ink (usually black) is applied which sinks into the grooves. Paper and plate are run through the printing press, where the ink is pressed onto the paper and creates the print. This can happen multiple times for many prints of the same image or once to create a monoprint.

The exhibition includes an etching by local printmaker Susanna Crum as well as tools to help viewers understand the process. The 25 prints by Lalanne and Appian further illustrate the intricate details possible with etching.

Lalanne preferred to show urban life. He lived during the time of the grand urban restructuring of Paris in the mid-1800s. Paris prior to modernization was full of confusing narrow streets and overcrowded buildings. This is expertly illustrated in his “Rue des Marmousets (Old Paris)” of 1862, with its tall leaning buildings and cobbled streets. It is placed next to his “Demolition for the Construction of the Rue des Ecoles” of the same year.

Lalanne is a master of the cityscape and architecture. His 1882 “View from the Louvre” is dense with bridges, barges and buildings and is my favorite in the exhibition.

Appian is to the country what Lalanne is to the city. A number of his prints feature the villages and pastoral areas in the Ain region of France. His compositions are not as dense as Lalanne’s, resulting in a feeling of openness and serenity. “A Pool” from 1867 is a visual breath of fresh air, probably more so for viewers of his day.

Appian’s “Edge of the Stream at Rossillon, Ain” from the same year and “Evening, Edge of the Rhone River at Rix, Ain,” completed two years later, show the country life and its provincial villages appealed greatly to him.