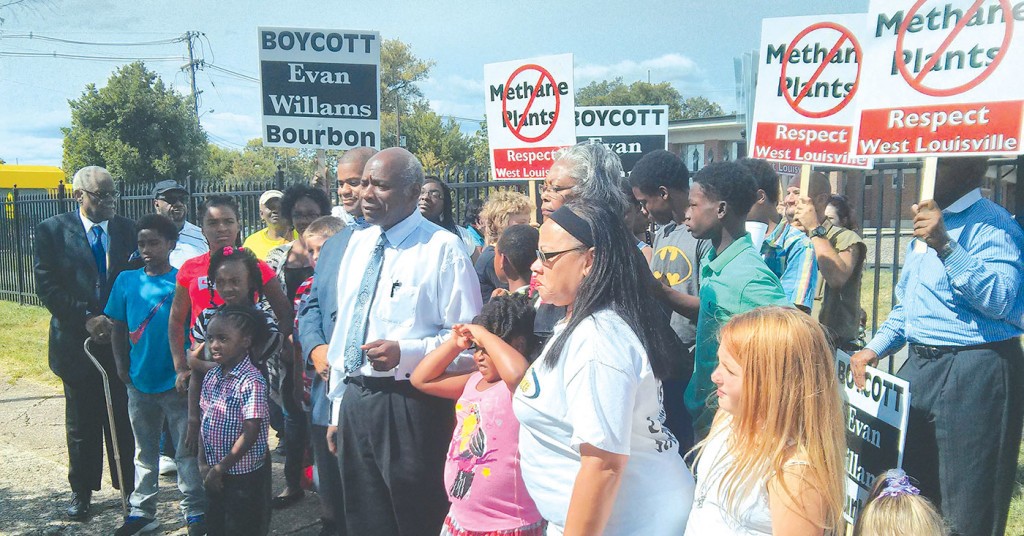 Originally, the protest outside of Roosevelt Perry Elementary School this past Sunday, Sept. 20, was going to be a “simulated gas attack,” to highlight the potential danger that the proposed anaerobic digesters at Heaven Hill Distilleries would have on neighboring schools and children.

“I thought about it and realized I don’t need to scare my community,” said Barker. “We are reasonable adults who can process this information and make the right decision. And when you put fear out into the community, you’re not going to have a good return.”

The proposed digesters would recycle food waste and capture the resulting methane gas for use as a fuel, and the only byproducts created will be compost and wastewater, according to Nature’s Methane (the company behind the project).

But many in West Louisville are concerned about the safety of these digesters, as well as the effects they will have on the air quality in their community, sentiments shared by Councilwoman Mary Woolridge (D-3) who attended the protest.

In a written statement issued the night before the protest, Bonnie Hackbarth, spokeswoman of JCPS, said, “We believe that the biodigester project in the California neighborhood can be good for our city and for JCPS, and that, if designed and maintained properly with all of the required safety features, does not risk the health of our students or the community.”

Hackbarth went on to say that JCPS safety experts along with environmental officials had received full briefings on the proposal by the mayor’s office and felt that the digesters wouldn’t pose any serious threat to the surrounding schools.

The mayor’s office also recently reached out to community leaders, including Barker and Kathleen Parks, from the Kentucky Alliance Against Racist and Political Repression, who also attended the protest.

Parks said that the meeting lasted for over four hours, and while she does believe that the people advocating for the construction of these digesters are good people, she still thinks they are missing the point.

“We’ve had 50 years of this, and now we are saying ‘no more,’” said Parks. “I really don’t think they totally understand the concern that West Louisville has. They are looking at it predominantly from a business point of view, not from a community point of view.”

Councilwoman Woolridge said that she had asked to speak with the mayor himself two months ago. But the only response she received was a visit from three attorneys.

“I don’t know if he sent them there to intimidate me, but I am too old to be intimidated by the mayor or anybody else,” said Woolridge. “We have told him over and over that we don’t want these methane plants, and we are not going to allow this kind of industry in residential areas.”