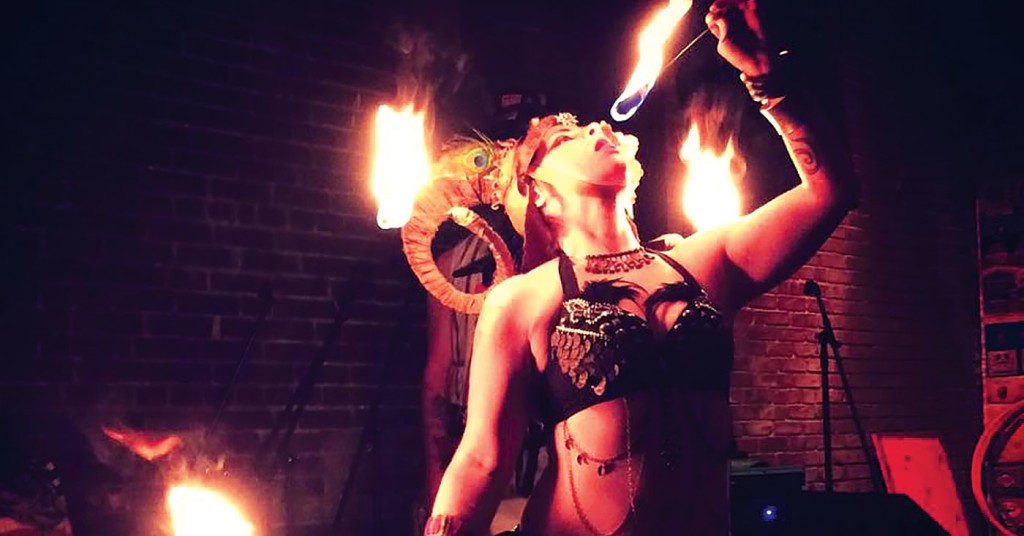 The idea of running away to join the circus is so prevalent in our shared culture that it may as well be wired into our DNA.

Local performers Ember the Fire Bender (Laurel Fleury), and Jacek the Strange (Jack Wojciechowski) have the circus part down through their work with local group Blue Moon Circus. Now they are working on the running away. You can help them depart in style, when the rest of Blue Moon bids them bon voyage by throwing a big party this Sunday at the Tim Faulkner Gallery. The Blue Moon Circus Send Off Party will feature circus acts, burlesque, art and music.

When they embark on their journey, the duo will be traveling on a bus they’ve retrofitted as a mobile home. They’ve filled it with circus props, circus costumes and cats. With their “Forever Tour,” they’re planning to live in the bus full time forever, touring the country and paying their way by showcasing their skills.

Blue Moon has traveled before, most notably last spring with “The Dirty Squirty Circus Tour.” The tour teamed Blue Moon with Lexington’s Tinderbox Circus and Vourteque, an electro swing DJ out of Chicago.

Over the course of 15 days, Dirty Squirty visited cities like New Orleans, Pensacola, Tallahassee and Gainesville.

But just touring isn’t enough for Fleury. “I’ve always wanted to live on a bus, and convert it.”

Fleury’s first circus skill was the one from which she takes her name. She started learning fire spinning and eating in 2005. She helped form local company Blue Moon Circus in 2007. Since then she’s expanded her act, adding belly dancing, glass walking and an assortment of side show skills.

Wojciechowski began training as a kid.

“When I was about 6 years old, there used to be a guy,” Wojciechowski remembers. “He used to ride by everyday, and all the kids would line up to watch him.” Wojciechowski got a unicycle almost immediately, and learned to ride. He picked up juggling skills as well.

Along the way, his dreams of performing got waylaid by reality, and he began laying tile. That was his life for many years. After a dispute with a business partner caused him to rethink his priorities, Wojciechowski went back to school and starting working in food service to pay his bills.

That’s were he met Fleury.

“I was running an Italian Ice stand downtown and juggling and riding a unicycle for tips. I saw her fire spinning in front of a bank. I was like, ‘Who are you guys? What are you doing? Can I do this? Can I be in the circus?’”

In lieu of an audition, Fleury went to the Italian Ice stand the next day to watch him cycle and juggle for tips. “I took a chance and asked him to join Blue Moon Circus,” said Fleury.

The Halloween season is a busy time for circus folk, and last fall Blue Moon took a gig at Asylum Haunted Scream Park, doing circus out among the games and concessions. Wojciechowski and Fleury worked closely during that time, but were actually the last people to realize they were smitten with each other.

Fleury recalled, “All the girls knew that I liked him, and all the boys knew that he liked me. Nobody said anything. We didn’t know … that’s where we fell in love,” Wojciechowski finished, “at the midway, kissing behind the ring toss.”

Fleury still had this dream of living on a bus, only now, she would have company. “We have gotten a lot done together in a short time because we share the same dreams.”

The “Forever Tour” already booked a string of dates sprinkled across Kentucky and the South.

Fleury admits that full time traveling circuses aren’t as common as they used to be, but she says it’s still attainable if you’re smart.

“We’ve gone to other cities, and we know how to  book ourselves at festivals, fairs, venues, dive bars and do work shops as well. We’re gonna do a little bit of everything along the way.”

That little bit of everything includes raising money for local animal shelters, a cause near and dear to the duo’s hearts and presumably dear to the hearts of Sebastian, Star, Omen and Dexter, the four cats who will be joining them on the road.

“At every stop, 10 percent of what we make will go to a local animal shelter. They helped us a lot with our animals, and so we wanted to give back,” said Fleury.

Wojciechowski pointed out that they donated to animal advocates before. “We did a benefit show for the Alley Cat Advocates and Shamrock. We raised $825.”

If it’s starting to sound crowded on that bus, don’t worry. It’s 36-feet long, and the whole group (two humans, four cats) have been living on the bus in their driveway for the last month, just to make sure they all fit.

Jacek the Strange and Ember the Firebender will perform their full “The Forever Tour” act at the Sendoff Party, joined by Bubbles the Clown, members of Blue Moon Circus, Earth.Worms.Dirt and other bands and performers. You can follow The Forever Tour’s adventures online at their blog, jackanamber.blogspot.com. •