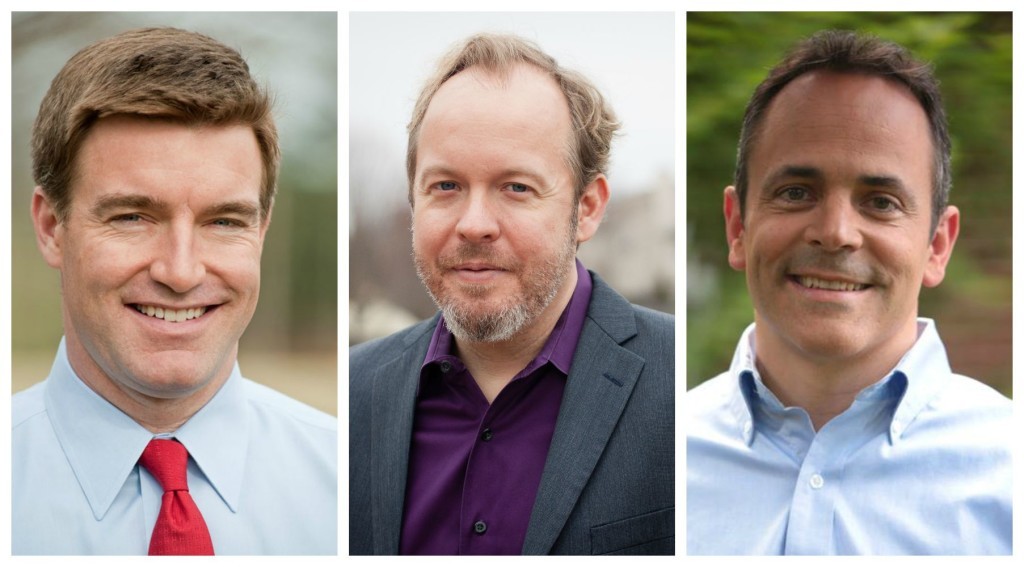 The first showing of all three candidates for Kentucky’s highest hen house was an exercise in political consistency. The evening included a lot of policy talk, too much —but surprisingly little — Kim Davis, and the usual mud slinging between the two party candidates with Independent candidate Drew Curtis managing to avoid the mud while throwing a few zingers of his own.

Debates are a chance for the electorate to hear more about each candidate’s platform. Debates are also a chance to see how each candidate performs under scrutiny. Based on last night’s event, held at Bellarmine College, it was difficult to determine a winner, a loser, or even a surprising front runner. Matt Bevin talked his version of high ideals and few details. Conway talked up his experience — avoiding any mention of his Kentucky birth, which has been a mainstay in his stump speech since winning the nomination — and Curtis tried as much as possible to stay focused on the issues while occasionally pointing out that neither of his fellow candidates managed to stay focused on the issues for very long before the political bromance kicked in with the usual name calling and insinuation that has been the hallmark of a very lackluster campaign from both major party candidates.

Viewers could have set an egg timer for how long it took for Rowan County Clerk and anti-gay marriage magnet Kim Davis to get mentioned. Fifteen minutes in, the first question about the notorious apostolic was uttered. Bevin, who rushed out to Eastern Kentucky for his photo op with the most offensive Kentucky stereotype since that crack at the end of Clueless, took the opportunity to once again accuse Conway of “not defending the Constitution” because the Attorney General refused to battle the Supreme Court decision proclaiming the 14th amendment applies to everyone, not just hetero America. Conway said he simply did not want to waste money on a case when “I knew we were going to lose.” He added that it would have also been a waste of taxpayer money to call a legislative special session in order to bring her up on misconduct charges; he also said he preferred to wait for the next regular session and develop a focused plan on how to ensure the Supreme Court decision is carried out while establishing some “legal relief” for those whose religious beliefs contradict the notion that everyone is equal under the law.

In answering the question Curtis told his fellow candidates, “I think you’re both wrong.” He added that elected officials should not get to put their personal beliefs before their jobs. “We are a nation of laws.”

Most of the discussion, however, focused on money issues. The state workers’ pension problem and the recent downgrade in the state’s credit rating made for some chewy discussion. Bevin maintained his position that closing out the current system and allowing it to expire while dumping all new employees into some version of a 401K is the best way to solve the long-term financial problem that he and Curtis have both stated publicly will contribute to another recession.

Conway reiterated past statements saying his priority is that the check go out. He was also impressed with the fact that he knew ARC stands for annual required contribution.

Curtis, who has campaigned almost entirely on the issue of the pension problem, once again summarized his proposal, which is to set up a line of credit rather than rely on issuing bonds. A line of credit can be tapped when necessary when market returns are low; and when they are high, the overage can be used to pay down the debt.

If there was a take away from debate, it was that Independent candidate Curtis was not the liberal pre-debate talking heads anticipated. If anything, he showed more conservative stripes by admitting that coal has a future in Kentucky, if only because it has price power that renewable energies do not currently have and that while we need early childhood education, he doesn’t want to say he’ll support something he isn’t sure the state can pay for given its current financial situation. Curtis also pointed out that, of the three candidates, he’s the only one that the coal industry isn’t pandering to. “I won’t sell them laws,” he said.